The couple just tied the knot at St. George's Chapel at Windsor Castle on Saturday, May 19. Now, the couple's official first photos as husband and wife have been shared with the world.

The portraits, taken by photographer Alexi Lubomirski, show the happy couple dressed up in their wedding attire. For the ceremony, Meghan wore a Givenchy dress, while Harry wore a Blues and Royals frockcoat uniform.

In April, Kensington Palace announced that Meghan and Harry had chosen a wedding photographer.

The wedding portraits were taken at Windsor Castle, following the carriage procession.

"The Duke and Duchess of Sussex would like to thank everyone who took part in the celebrations of their wedding on Saturday," a Kensington Palace spokesperson said Monday. "They feel so lucky to have been able to share their day with all those gathered in Windsor and also all those who watched the wedding on television across the UK, Commonwealth, and around the world. Their Royal Highnesses are delighted with these official portraits taken by Alexi Lubomirski and are happy to be able to share them today. They would also like to say thank you for all of the generous messages of support they have received."

Lubomirski, who attend the wedding, added, "It has been an incredible honor and privilege to document The Duke and Duchess of Sussex's inspiring journey of love, hope and family; from the engagement photos, all the way through to the official wedding and family portraits on Saturday. This has been a beautiful chapter in my career and life, that I will happily never forget." 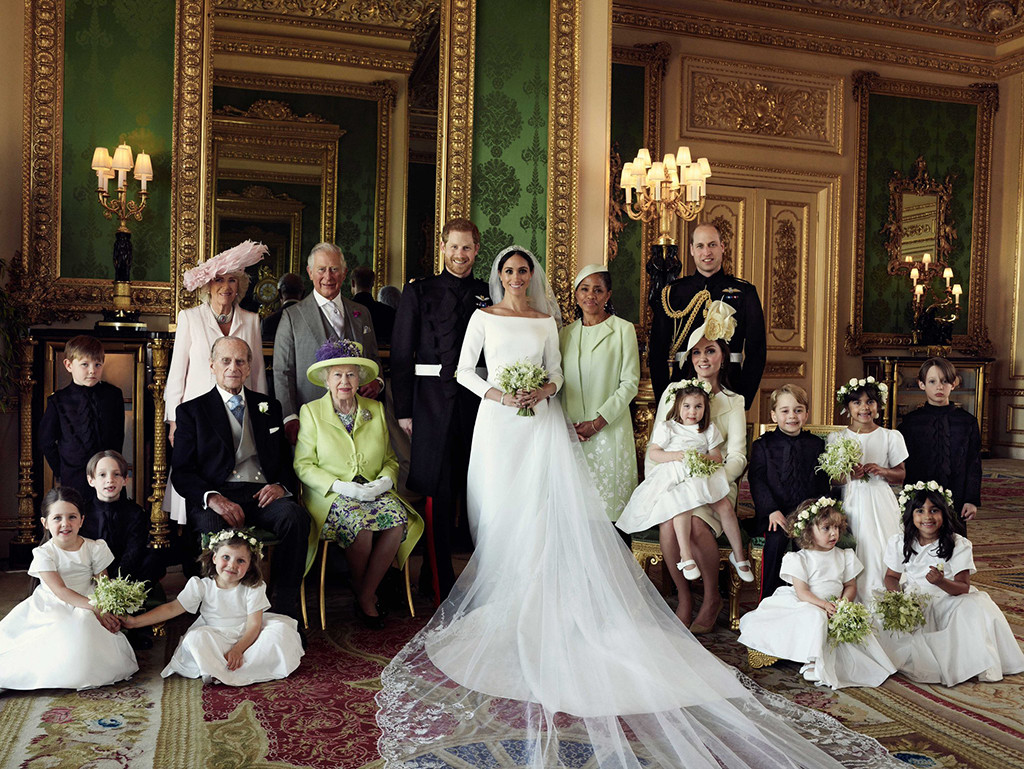 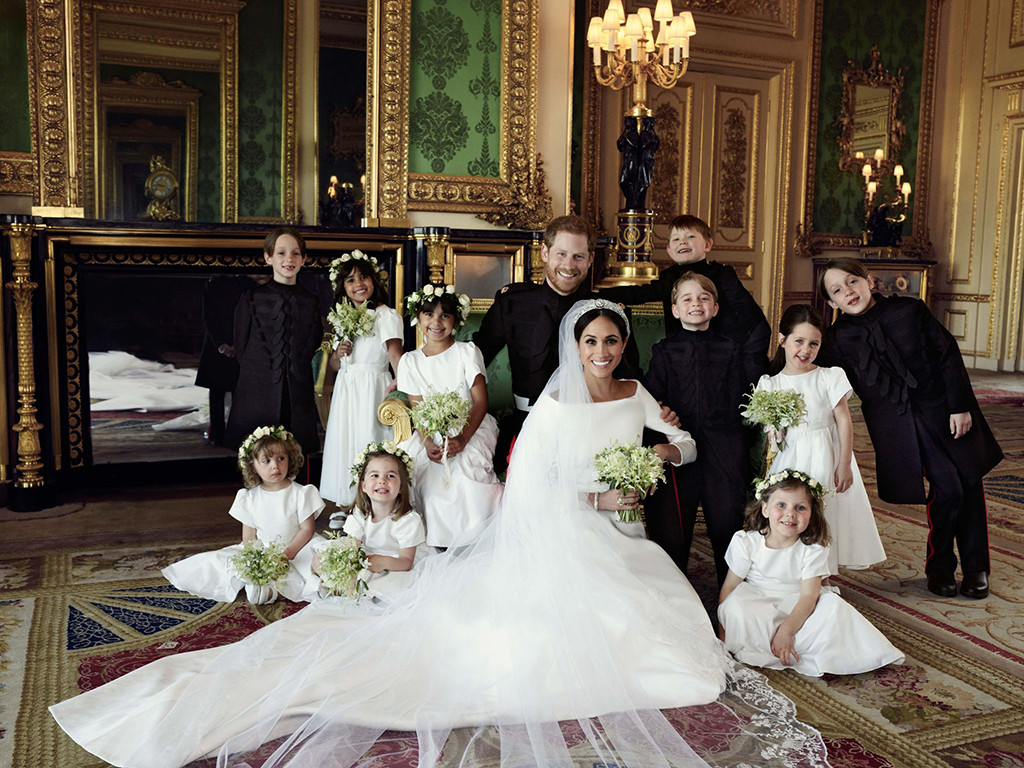 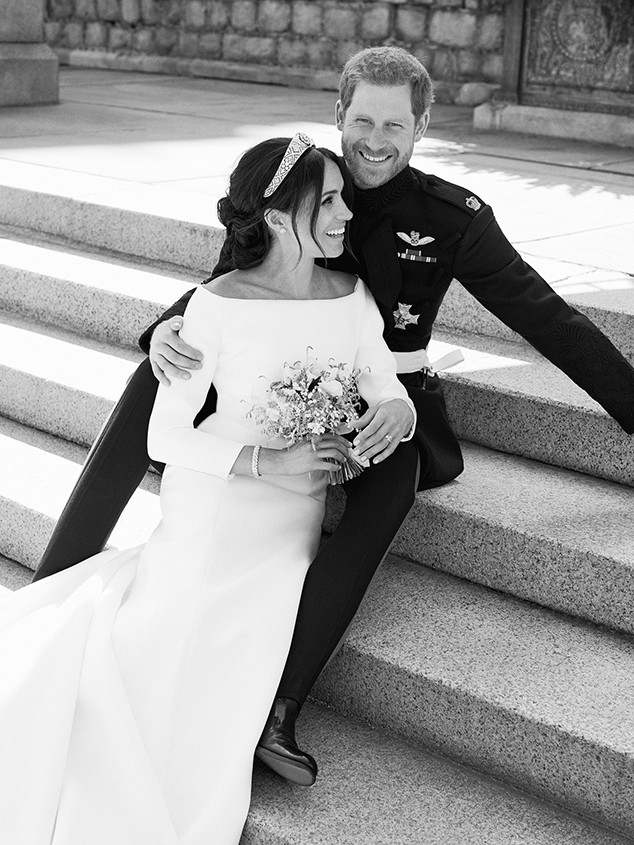 Two of the portraits were taken in the Green Drawing Room and feature Jasper Dyer, Camilla Parker-Bowles, Prince Charles, Doria Ragland, Prince William, Brian Mulroney, Prince Philip, Queen Elizabeth II, Kate Middleton, Princess Charlotte, Prince George, Rylan Litt, John Mulroney, Ivy Mulroney, Florence van Cutsem, Zalie Warren and Remi Litt; only the bridal party appeared in both of the portraits with the newlyweds. The third image, featuring only Harry and Meghan, was taken on the East Terrace; it's the only image that's in black and white.

Meghan and Harry's wedding comes six months after the couple announced their engagement to the world.

During the ceremony, Harry and Meghan also honored his late mother, Princess Diana.

After the couple announced their engagement to the world in November, the duo sat down for an interview, during which Harry said that Diana and Meghan would've been "best friends."

When asked what it meant to have stones that belonged to Princess Diana included in her engagement ring, Meghan shared, "I think everything about Harry's thoughtfulness is - and the inclusion of that and obviously not being able to meet his mom it's so important to me to - to know that she's a part of this with us." 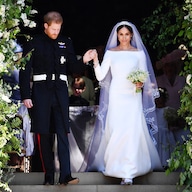 She continued, "And I think in being able to meet his aunts and - and also like Julia and just different people who were so important to his mom, I'm able to, in some way, know a part of her through them and of course through him. And it's - it's incredibly special. And you know to be able to have this which sort of links where you come from and Botswana which is important to us and it's - it's perfect."

Prince Harry then shared what his mother would've thought of Meghan.

"Oh they'd be thick as thieves, without question, I think she would be over the moon, jumping up and down, you know so excited for me, but then, as I said, would have probably been best friends - best friends with Meghan," he said. "So no it's - you know it is days like - days like today when - when I really miss having her around and miss being able to share the happy news. But you know with the ring and with everything else that's going on I'm sure she's…"

On May 4, a statement from the Communications Secretary to Prince Harry was released, which states that the royal is "keen to involve his mother's family in his wedding."

"All three siblings of Diana, Princess of Wales will be in attendance and Lady Jane Fellowes will give the reading," the statement reads. "Prince Harry and Ms. Markle both feel honoured that Lady Jane will be representing her family and helping to celebrate the memory of the late Princess on the wedding day."

All of Diana's siblings were in attendance at the wedding on Saturday, where Lady Jane Fellowes gave her reading. Harry and Meghan also remembered his mother with the bridal bouquet. For the bouquet, the couple chose Diana's favorite flower, forget-me-nots. The Palace also shared that a day before the wedding, Harry hand-picked flowers from their private garden at Kensington Palace for the ceremony.

During Meghan and Harry's lunchtime reception after their wedding, Elton John, who was one of Diana's close friends before her passing, performed for the couple and their guests.