Prince Harry and Meghan Markle are saying no to gifts on their wedding day.

When close to 600 guests arrived at St. George's Chapel Saturday afternoon, there was no need to bring a present, unique item or lavish gift.

Instead, the bride and groom wanted well-wishers to make a charitable donation to some of their favorite causes.

"Prince Harry and Ms. Markle do not have any formal relationships with the charities chosen," Kensington Palace previously shared in a statement. "The couple have chosen charities, which represent a range of issues that they are passionate about, including sport for social change, women's empowerment, conservation, the environment, homelessness, HIV and the Armed Forces. Many of these are small charities and the couple are pleased to be able to amplify and shine a light on their work."

And whether or not you scored an invite to the special wedding, you can make a difference. Take a look at the seven charities below and consider celebrating the special day with a donation.

The charities include @chivaprojects, which supports children growing up with HIV and their families. The charity helps to create a more hopeful and optimistic future for them, ensuring they achieve their greatest potential. https://t.co/W3AQovuL2H pic.twitter.com/BvnZjmzPOl

— The Duke and Duchess of Cambridge (@KensingtonRoyal) April 9, 2018

CHIVA (Children's HIV Association): The charity supports children growing up with HIV and their families. The cause also helps to create a more hopeful and optimistic future for them, ensuring they achieve their greatest potential. "We are delighted and honored that Prince Harry and Ms. Meghan Markle have chosen to recognize our work supporting the health and wellbeing of children and young people living with HIV in the UK and Ireland," CHIVA chair Dr. Amanda Williams previously shared with People. "We are a very small charity and through our work we support over 1,000 young people living with HIV. All donations will make a significant difference to our programs of work and lead to direct improvements in the lives of these young people."

Crisis: The national charity aims to help homeless people around the world. "We are hugely grateful that Prince Harry and Ms. Markle are asking the public to support Crisis as they celebrate their wedding. Homelessness is one of the most urgent issues of our time, but at Crisis we know what it takes to end it.," Chief Executive of Crisis Jon Sparkes shared. "Donations will help us to support more people to leave homelessness behind through our housing, employment, education and advice services across the country, and to campaign for the changes needed to solve the homelessness crisis once and for all."

The Myna Mahila Foundation: The charity empowers women in Mumbai by creating a network of female entrepreneurs and showing them how to make menstrual hygiene products. Meghan visited the charity in person and wrote a piece about the organization in March 2017. "The women's work opens the dialogue of menstrual hygiene in their homes, liberating them from silent suffering, and equipping their daughters to attend school," Meghan shared with Time.

Scotty's Little Soldiers: The organization is dedicated to supporting children who have lost a parent serving in the British Armed Forces. "Having met Prince Harry at Buckingham Palace last year, I know that the Armed Forces and looking after the children our heroes have left behind is close to his heart," founder Nikki Scott previously shared. 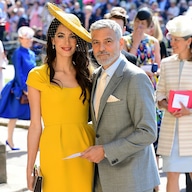 Also selected is @StreetGames, a charity which uses sport to empower young people to kick-start a cycle of positive change in their own lives. Prince Harry and Ms. Markle visited one of the charity's projects together in Cardiff earlier this year. https://t.co/UPY6Nyt2k6 pic.twitter.com/0XQJOL6iNj

— The Duke and Duchess of Cambridge (@KensingtonRoyal) April 9, 2018

StreetGames: The charity uses sports to empower young people to kick-start a cycle of positive change in their own lives. Prince Harry and Meghan visited one of the charity's projects together in Cardiff earlier this year. "All of us at StreetGames are absolutely thrilled to have been personally chosen by Prince Harry and Ms. Markle," StreetGames CEO Jane Ashworth shared. "It's a great honor to have our work using sport to change lives and communities recognized in this way."

Surfers Against Sewage: The charity is dedicated to tackling plastic pollution in our oceans. Since being chosen by the couple, the organization has seen a huge surge in phone calls and traffic to its website. In fact, new membership figures of the charity have increased dramatically, up 178% on last year, with many international donors now also signed up.

The Wilderness Foundation UK: The organization promotes the benefits & enjoyment of wild nature. Through the great outdoors, the charity helps build resilience in vulnerable teenagers & introduces rural employment to urban youth. "As the world's population grows exponentially the planet's remaining wild places and resources are coming under increasing threat. It has never been more important for us as humans to protect the planet that gives us life," CEO Jo Roberts shared. "Whilst teaching conservation values, we in turn use the positive power of nature to support and recharge the lives of challenged and vulnerable young people and adults."