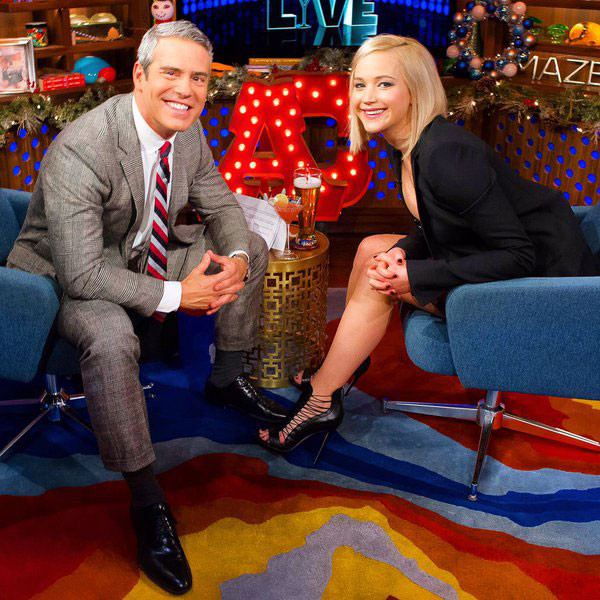 Everyone has felt it, thought it and wished for it, and now we know for sure that there was definitely some off-screen chemistry between Jennifer Lawrence and Liam Hemsworth.

During her first appearance on Watch What Happens Live with Andy Cohen, J.Law (aka one of the biggest Bravo fans in all of the land) didn't hold back when it came to getting down to the nitty-gritty—like whether or not she and her hunky co-star had exchanged some lip action when the cameras weren't rolling—while double-fisting between a beer and Pumptini.

Not only that. Lawrence also confessed to smoking weed before the Oscars, spilled on Bradley Cooper's kissing skills, and more!

Here's what she had to say about anything and everything during her WWHL appearance:

1. J.Law & Liam Kissing in a Tree: "It has recently been rumored that you and Liam Hemsworth had some PDA At the Waverly inn. Have you two ever kissed when the cameras weren't rolling?," Andy asked Lawrence while playing Plead the Fifth. "Liam and I grew up together. Liam's real hot.What would you have done?…Yeah, I have," she admitted, and then when Cohen said he'd pick Gale over Peeta any day, Jennifer responded, "I did, at one point."

2. She Smoked Weed Before the Oscars: J.Law confessed that she "smoked pot at none of [the award shows], but I saw my brother smoking out of a bong before one of the Oscars, which I won't say which one..." and when Andy asked if she took a hit, she simply replied, "Yeah."

Was it the year she won? She wouldn't say (which obvs makes us think YES).

3. Bradley Cooper's Kissing Game Is Strong: When asked if her recurring co-star is a good kisser, J.Law said, "Fantastic kisser," and adds that there is tongue action happening there.

4. No Awkward Rivers Drama: There had been some tension between Lawrence and the late Joan Rivers in the past, so when she had to do a scene with Melissa Rivers for Joy, the actress made sure things didn't get awkward.

"I wondered if it was going to be uncomfortable, so I kind of went into it saying, you know, I really—because I really do love Joan rivers. And she had such an incredible life and is an unbelievable woman. I just, you know, I'm very opinionated. So, I don't think we would have had a beef had we had met...I said that to her and was complimentary of her mom and kinda got it out of the way and then we were great."

5. Her Housewife Tagline: "If my stomach hurts too much from the night before, I will drink beer."

6. Her Dinner Date With Adele & Emma Stone: A caller asked what the topic of conversation was during that star-studded dinner, and who picked up the check (clearly, something we all wondered after getting over our jealousy). Lawrence said, "Oh, god. I don't know who picked up the check. It might've been Adele. I think we would've all been like, 'Adele, you've had a pretty good week.' I'm sure we would've probably let her get it. What did we talk about? I don't know, we talk about everything but work."

7. Her Essay on Gender Wage Gap: "I think I was heard, and I think that people started talking about it. So, you know, change comes from talk. So, I think the gap is narrowing. We're getting there. So, yes, I'm hopeful."

(E! Online and Bravo are both members of the NBCUniversal family.)