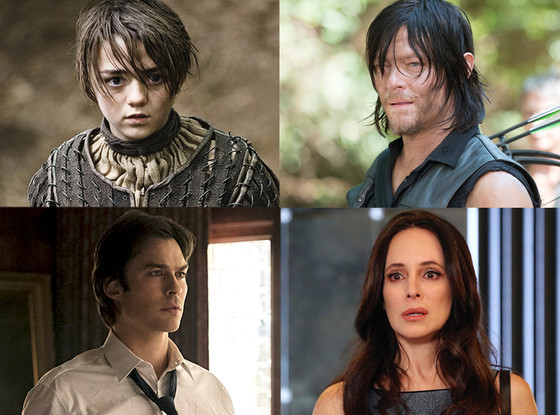 Happy Tuesday! In today's roundup of exclusive TV scoop and spoilers, we've got intel on a new Vampire Diairies romance, and Michael Trevino's farewell. Plus, the latest on The Royals, Outlander, Orphan Black and Revenge. Read on for the goods!

CLICK: Vote in the Sweet 16 of Alpha Male Madness now! 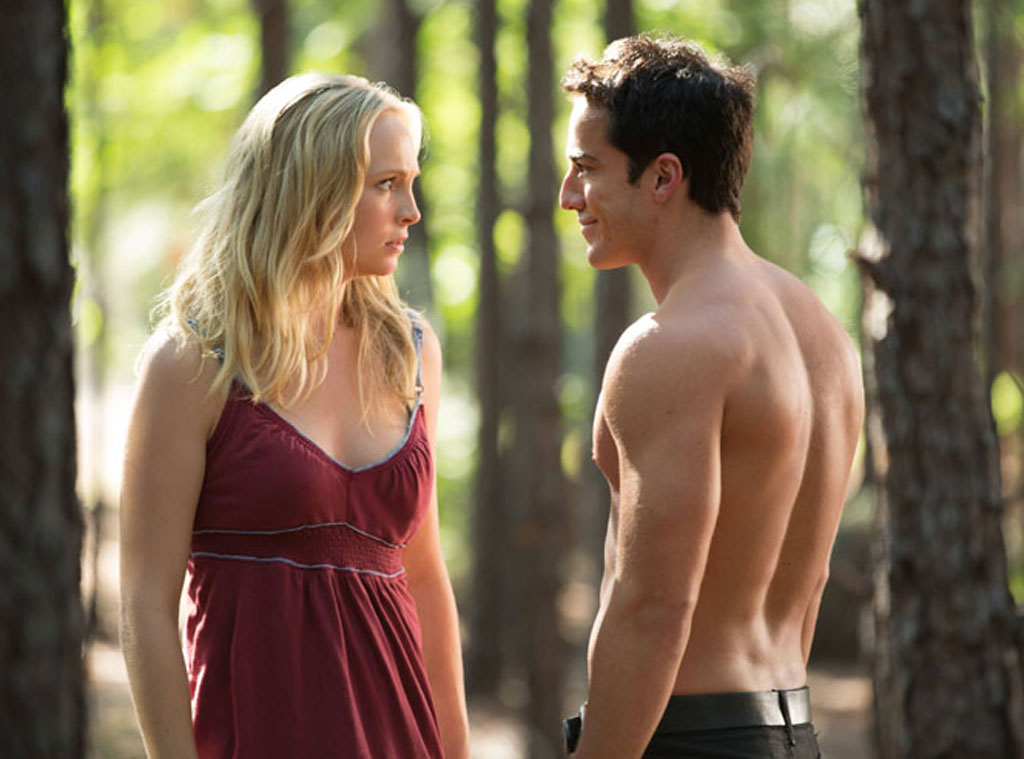 Chrissy: With Michael Trevino leaving TVD, will we get to see a goodbye of some kind between Tyler and Caroline?
Remember Forwood?! Memories, huh? "Michael [Trevino] and I do have some scenes coming up. We're going to be reminded of the journey that they've had up to this point," Candice Accola teases. "It's just very real. It was a very honest moment between the characters. It was just very simple and honest of where these characters are at this point in their lives."

Seamus: So glad we finally got to learn more about Enzo on TVD. But is he going to hook up with Damon's mom?!
That's exactly the question the show wants you to be asking about Enzo and Lily (Lilenzo?). "You're not quite sure where the relationship is going to go. It could lead to a number of things," Michael Malarkey says. "We've intentionally left that open. There's moments in upcoming episodes where you see real chemistry real there, where you think, ‘Oh maybe it could be something more than just friendship.' We've left the door open." As for how Damon will react to his mom and his BFF's connection?  "We don't explore it too much, but I'm sure we're going to be delving more into it in season seven. It's briefly touched upon, but not really enough to comment on!"

Irene: Diane Lockhart gives me life on The Good Wife. Will Gary Cole be back as Diane's husband before the season ends?
Sorry, he won't be back this year. However, Gary Cole did spill to us that he assume he'll be back next year. "I usually show up there once a year. I made my visit this year and I assume they'll be back, you never know, but it seems like they'll be back for another year, " he says. "So hopefully I'll visit my marriage once."

CLICK: Ranking the best and worst superhero costumes on TV! 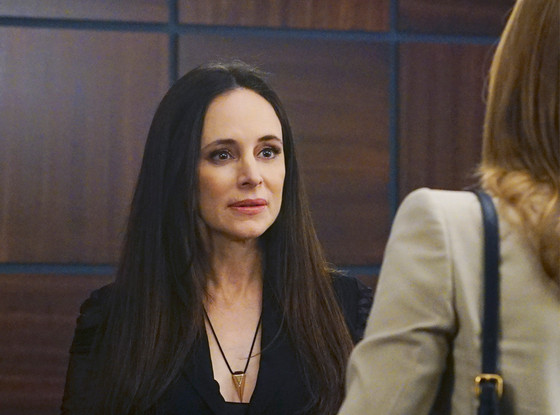 Jeaneen: Cannot believe Victoria Grayson is dead on Revenge! Will Charlotte come back to the Hamptons after she finds out?
Christa B. Allen will definitely be returning, but won't be sharing any scenes with Madeleine Stowe, even in flashbacks. "I unfortunately didn't get to work with Christa," Stowe tells us. But when asked if we could possibly be seeing any other returns before season's end, Stowe teases, "There will be surprises, for sure."

Joey: Why do we have to wait until October for new Walking Dead?! Any scoop to tide my hunger for zombies over?
Only because we care. Get ready to meet Delvin, a new recurring character who is quite cynical and sarcastic. He's not angry, he just thinks people can be pretty dumb. Another new character we'll see early on is Tucker, a hardworker tough guy who values fairness. Hm…

GemmaLee: Outlander scoop, please! What's with the scene with Sam in the river you mentioned?
It's a fun scene that will take place in one of the next two episodes, when Claire and Jamie go to Jamie's home, Lallybroch, and a mill needs to be fixed. And yes, because you asked (you didn't) and you are so pervy (you're not), it does involve him completely naked in said river. We asked Sam Heughan if the nudity (along with all the sex scenes) is becoming old hat at this point and he had a good laugh at the question. "No absolutely, it's not old hat! You know, it's a part of the books, it's all in there in the books. We don't shy away from it, but we try to make sure it's always moving the story forward. [The river scene] is a kind of fun lighthearted moment in the story, but it actually moves the story forward, without giving away too much, but there's another character there that may see what's happened to Jamie and it affects them and ultimately moves their relationships forward." For the record: I do NOT like how it moves things "forward!" ‘Cause we all know "forward" is code for "the awful, totally horrific stuff that is happening at the end of the season one." Pre-book your therapist now. 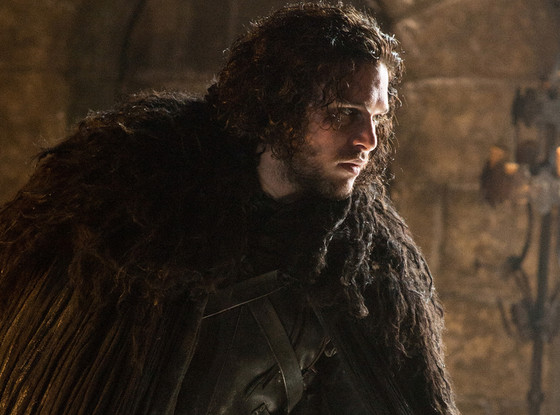 Eric: Game of Thrones has been slow in the first two episodes this season. Is the action going to pick up soon?
We asked Kit Harrington that very question, and his answer has got us all kinds of excited! "There is one really big battle coming up," Harrington says. "There is one really epic battle. There's some other good fights and some good action, too, towards the end of the season. It's definitely one to watch."

LauraLee: Loving Haley and Andy on Modern Family! Will they get together?
I just asked Sarah Hyland herself that on the E! News set and she gave this dish on the new "Ross and Rachel" and the end of the season... 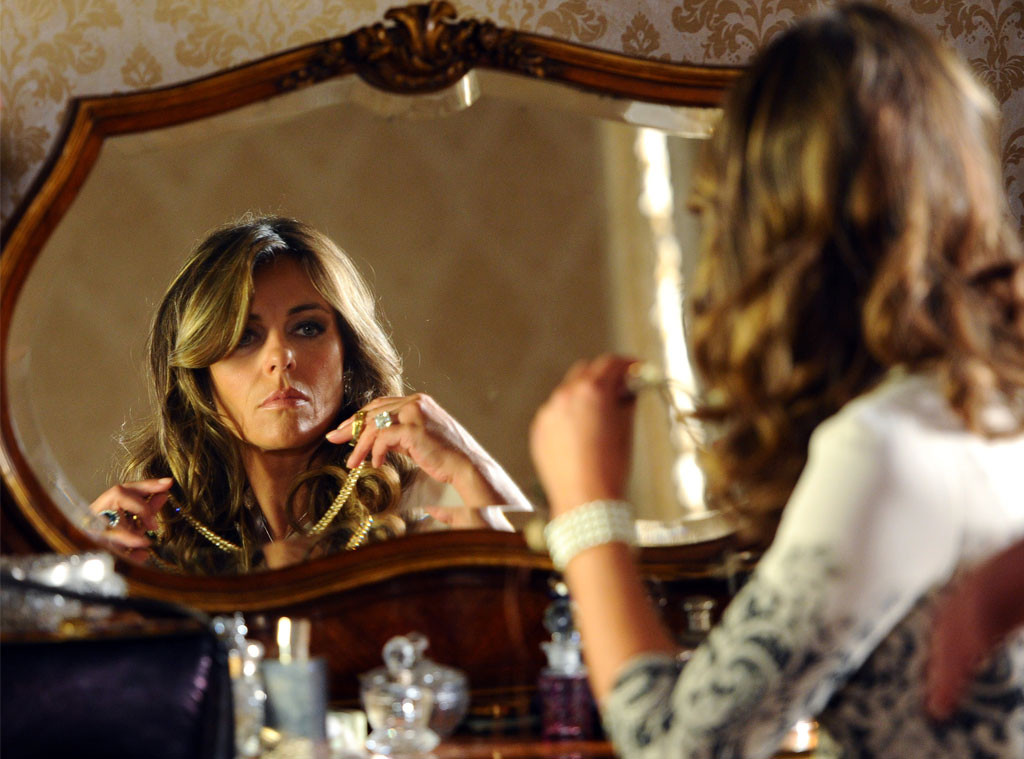 Sarah: I need scoop on my new obsession: The Royals! What have you got?
This week's episode of The Royals takes a deep look at something that plagued the real royal family recently. It involves nudity, paparazzi and a serious violation of privacy of one individual. Plus, the queen's mother (Joan freaking Collins!) finally arrives, and she. Is. Flawless. And so fierce. And is probably the only person who can put Queen Helena in her place. You do not want to miss their passive-aggressive showdown!

Leah: Got anything on Orphan Black?
Who's ready for some Team Hendrix this season?! "Allison and Donnie have found a renewed interest in each other and their relationship is in a reparative phase," Jordan Gavaris tells us. "They are very much enjoying being together in the suburbs and doing that whole suburban thing, being the perfect suburban couple. Sometimes that leads to a caper or two, and sometimes Felix is there to help out. He's still going to be a crisis counselor. It's in those moments I relish the comedy and have fun with it. He'll be called upon in the very near future to help with a crisis, and it has hilarious results."

CLICK: Get the latest scoop with our Spoiler Chat! 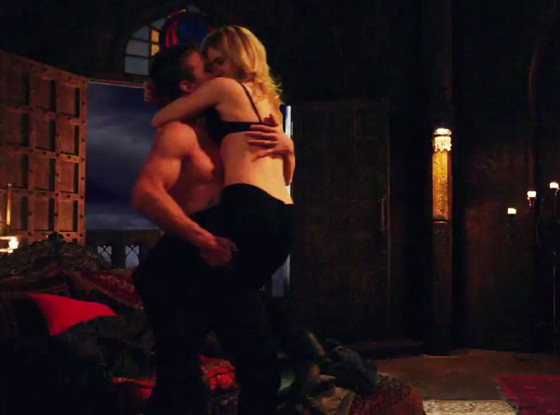 Lizzie: Olicity scoop, please! #Arrow
You know that hot, sexy, intense Olicity hookup that a certain promo spoiled for us all? You might want to keep your eyes peeled during this week's episode. Because a certain blonde IT expert might be wearing those exact same clothes in the episode that she does in the promo…In other, unrelated news, be prepared to see a super strong and sassy Felicity going forward. "For what it's worth–and I'm not objective—I feel like Felicity's been developing quite a bit of backbone this year," executive producer Marc Guggenheim tells us. "We certainly developed her as someone who's not afraid to stand up to Oliver and show some backbone. That's her character journey in many ways, her developing herself outside of her romantic relationships."

Anna: Got anything on The Originals?
Even though the show hasn't been focusing on Davina and her continuing mission to figure out a way to bring Kol back from the dead, that doesn't mean everyone's forgotten about them. "Davina will get one little ray of hope of possibility of what she might be able to do, a very surprising twist that might aid her in her quest to resurrect Kol," executive producer Michael Narducci says. "She has to decide if that's the path she wants to follow given what it's going to cost her." 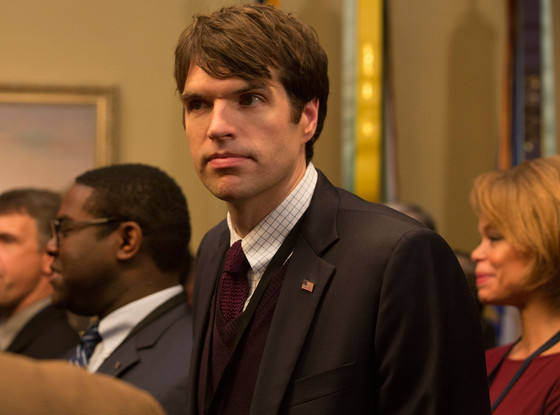 Sandra: My beloved Veep is back and everything is right in the world, but where's Hugh Laurie?
The man formerly known as Dr. House is coming! And the cast is just as excited for you to see him as you are. "He's incredibly funny," Timothy Simmons tells us. "Our show is run by Brits  and they all understand he's super funny from when he was doing Fry and Laurie, but I don't think audiences in the United States—they only really know him from House. I think it'll be a great thing for people in the States to realize how funny he is, which is very funny."

Mark: I need anything you've got about Ward on Agents of SHIELD!
The former-SHIELD and Hydra baddie is back in a major way in tonight's episode, when Coulson reaches out to him as a last resort when it comes to finding Skye. What is surprising is how helpful Ward is to the team, and seeing him back with Coulson and Fitz in the field is going to give you a major case of déjà vu. How will Skye react to seeing her psycho stalker working with her SHIELD family? Let's just say she won't be as into it as we are.

Spoiler Chat is new every Tuesday at noon ET/9 am PT on E! Online. BOOKMARK THIS PAGE so you can always find it!

CLICK: Renewed or canceled? Find out the fate of over 60 shows!