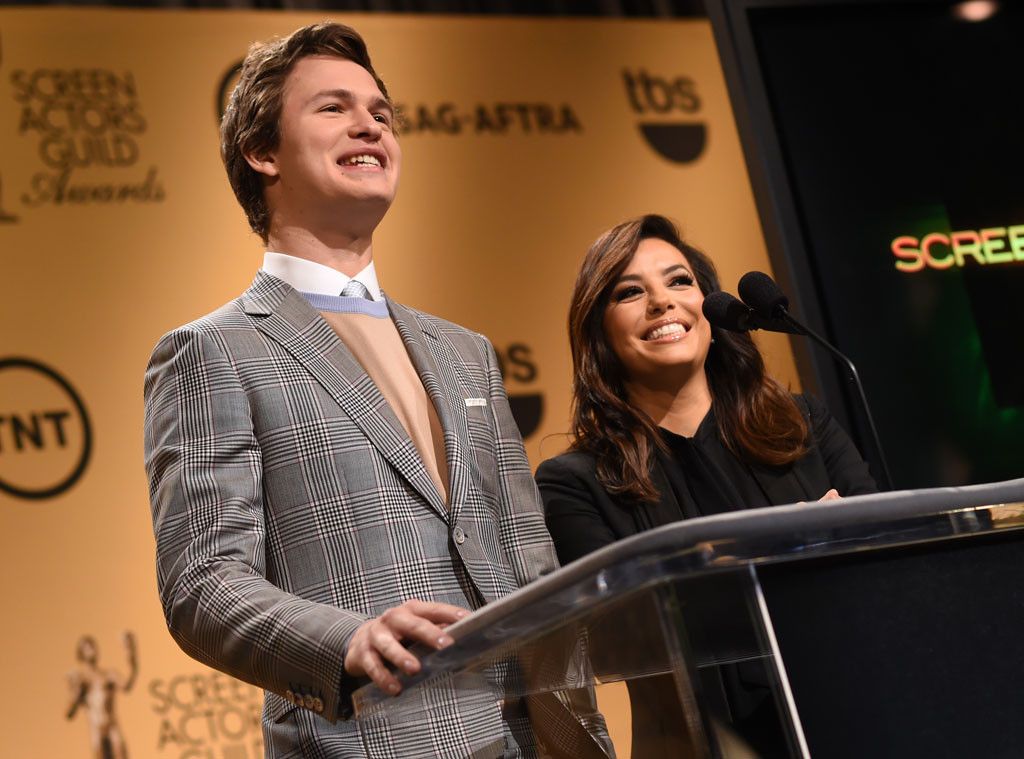 Ansel Elgort and Eva Longoria announced the nominees for the 21st annual Screen Actors Guild Awards Wednesday morning, and the stars who received the coveted honor have poured out in waves to thank SAG-AFTRA for recognizing their work in film or in television. We've rounded up all of the reactions from your favorite celebrities after hearing their names called on the stage.

Matthew McConaughey, True Detective, Outstanding Performance by a Male Actor in a Drama Series: "To Rustin cohle—the best outlaw west of Woody Harrelson and the best detective in the business—thanks to Nic [Pizzolatto] for the ownership and to my fellow actors for the nomination."

Matt McGorry, Orange Is the New Black, Outstanding Performance by an Ensemble in a Comedy Series:

Honored to be nominated for Best Comedy Ensemble at #sagawards ! I'd tag all you MFers but there's 40 of us. WE ROLL DEEP SON! #OITNB

Jenji Kohan, Orange Is the New Black, Outstanding Performance by an Ensemble in a Comedy Series: "I'm thrilled for our cast!  This bench of talent runs so crazy deep. These nominations are a tribute to the humor and depth and humanity they've brought to these characters. How awesome that they're everyone's favorite felons!"

The Normal Heart, Performance by a Male Actor in a Television Movie or Miniseries

@SAGawards I just woke up from a night shoot in London to the incredible news. I am honored and so proud to have been nominated by my peers.

@SAGawards Thank you very much SAG. Thank you brother and sister actors! Humbled by the nominations.

PHOTOS: Every red carpet look from the 2014 SAG Awards

Eddie Redmayne, The Theory of Everything, Outstanding Male Actor in a Leading Role: "To be nominated by my peers, and to be included in a list that is comprised of so many actors I admire, is an incredible honor. And to be recognized alongside Felicity Jones and my castmates means the world. Huge, huge thanks to SAG-AFTRA; I am beyond grateful."

Keira Knightley, The Imitation Game, Outstanding Female Actor in a Supporting Role: "Thank you so much to the Screen Actors Guild. It's such an honor to be nominated by your peers and in the company of this group of talented women. I'm thrilled to celebrate this morning with Benedict Cumberbatch and the cast."

The Imitation Game, Outstanding Male Actor in a Leading Role

Sherlock: His Last Vow, Performance by a Male Actor in a Television Movie or Miniseries

"I'm over the moon. And so delighted to receive recognition in such esteemed company for both Sherlock and The Imitation Game by my acting peers. What an amazing early Christmas present! Thank you to all who voted and watched both pieces of work."

Michael Keaton, Birdman, Outstanding Male Actor in a Leading Role: "As an actor being nominated by actors for playing an actor, I am truly, truly grateful for this honor. An ensemble like this hardly ever comes around, and all of us made this very unique film work—lead by our maestro, director Alejandro Iñárritu."

Jennifer Aniston Cake, Outstanding Female Actor in a Leading Role: "This is the best 6:00am wake up call ever. Words can't describe how blessed I feel to be recognized like this by my peers for this film. What an enormous feeling of joy and gratitude."

Morten Tyldum, director of The Imitation Game: "I'm overjoyed that the Screen Actors Guild has chosen to acknowledge Benedict, Keira, and our phenomenal ensemble for The Imitation Game. Together, we set out to make a film that honored the legacy of Alan Turing and his team in the style that they deserved. I'm so proud of this talented group of performers, who brought this story to life with the utmost grace, intelligence and heart."

Ethan Hawke, Boyhood, Outstanding Male Actor in a Supporting Role: "I've been acting for 30 years now. So the SAG nomination is genuinely meaningful to me. Particularly this year, with the loss of Phil and Robin, our acting community is more important to me than ever."

Thank you, thank you to all my fellow actors for nominating me for lead actress in #SAGAwards. #honored

Edie Falco, Nurse Jackie, Outstanding Female Actress in a Comedy Series: "I still can't quite believe what I get to do for a living - and to be recognized by other actors I respect - it's thrilling."

Adrien Brody, Houdini, Performance by a Male Actor in a Television Movie or Miniseries: "Thank you, SAG. I am grateful for this recognition by my peers. It was a great honor to have the opportunity to portray master magician Harry Houdini, and a delight to be invited back to the troupe in the Grand Budapest Hotel, led by the other master magician, Wes Anderson. Thank you so much."

Jake Gyllenhaal, Nightcrawler, Outstanding Male Actor in a Leading Role: "There are so many incredible performances by actors this year so to be included amongst them is pretty damn thrilling. More than anything though is the acknowledgement from other actors - who understand the odd, fascinating, and ultimately magical job that creating a character can be - that moves me. I am even more happy for my sister who I think is extraordinary in The Honorable Woman and it would seem that SAG thinks so too. My sister's a badass."

Patricia Arquette, Boyhood, Outstanding Female Actor in a Supporting Role: "I am so honored to be recognized by my fellow actors and to also have Ethan and our entire ensemble nominated. Our recognition are a testament to the vision of [Richard] Linklater and to every single actor and crew member that committed to this film whether they had no lines, one line, showed up for one year or committed to all 12 years on this film, as many did."

Maggie Gyllenhaal, The Honorable Woman, Female Actor in Television Movie or Miniseries: "Making The Honorable Woman was one of the most inspiring and exciting experiences of my career so far, and I'm thrilled to be nominated for my performance in it. Hugo and the cast were beyond amazing, and I'm so grateful that SundanceTV and the BBC took a chance on this show. Also, it's pretty awesome that my brother and I are going to be there together!"

Tatiana Maslany, Orphan Black, Outstanding Performance by a Female Actor in a Drama Series: "Thank you so much to the Screen Actors Guild for this incredible honor! I can't believe I'm in the company of such an amazing group of artists. It means so much to me and everyone on Orphan Black to have this kind of support from our peers. Thank you!"

Steven Levitan, Modern Family, Outstanding Performance by an Ensemble in a Comedy Series: "I love this nomination because this has always been a true ensemble show. So much of our success comes from how well these eleven actors work together week after week. Not a day goes by when I don't thank my lucky stars that these brilliant, generous and grounded people make up our family."

Christopher Lloyd, Modern Family, Outstanding Performance by an Ensemble in a Comedy Series: "Just exposes our dirty little secret -- that our show's success, first and last, derives from our sterling cast"

Ty Burrell, Modern Family, Outstanding Male Actor in a Comedy Series: "Thank you to the Screen Actors Guild for this recognition. I had such a flood of emotions when my phone rang at 5:50 am this morning because I was riding a big game cat while fighting off an army of clones. When I woke up at 7 I had another flood of emotions when I found out that I was nominated for a SAG award along with our ensemble nomination! It is such a privilege to work with this amazing cast and crew and I can't wait to have dinner with them on January 25th!"

Viola Davis, How to Get Away With Murder, Outstanding Performance by a Female Actor in a Drama Series:

I am honored to be nominated by my peers. I am truly grateful! Thank you.

Naomi Watts, St. Vincent, Outstanding Female Actor in a Supporting Role: "I'm thrilled and completely surprised with this morning's news. The fact that I got to work on two incredible films - St. Vincent and Birdman - with truly extraordinary actors and in the comedic arena (a new world for me!!), and then to be recognized by my peers...feels pretty fantastic. I'm honored beyond words to be an actor."

Terry Crews, Brooklyn Nine-Nine, Outstanding Performance by an Ensemble in a Comedy Series: "All of us at Brooklyn Nine-Nine are thrilled to be nominated for ensemble. We are so fortunate to be able to work together and appreciate the amazing writers and producers for all of their hard work. To be acknowledged by our peers is a true honor."

Felicity Jones, The Theory of Everything, Outstanding Performance by a Female Actor in a Leading Role: "Thank you to SAG-AFTRA for this very special nomination; it's an honor to have such recognition from one's fellow actors. I feel privileged to be a part of Jane and Stephen Hawking's unique story, and it is really wonderful to be enjoying this moment with Eddie Redmayne and the rest of the phenomenal cast."