The Ice Cream Truck Song Has a Racist History 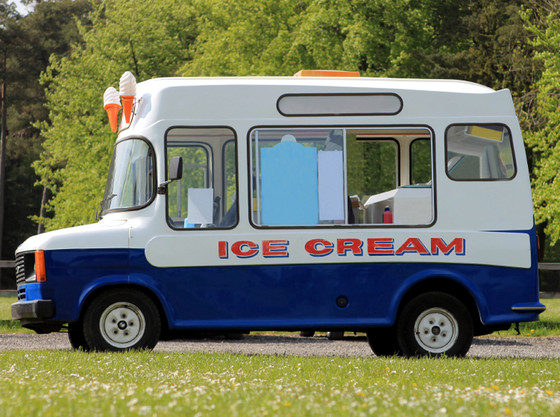 Remember when you found out "Eeny, Meeny, Miny, Moe" wasn't actually about a tiger's toe and was, actually, once very racist? Well, here's another childhood ditty with a problematic past: The ice cream truck song.

The tune—which many now associate with "Do Your Ears Hang Low?"—has connections to a different song that was made popular years before a rhyme about your ears wobbling to and fro, NPR's Theodore R. Johnson III explains:

"'N----r Love A Watermelon Ha! Ha! Ha!' merits the distinction of the most racist song title in America. Released in March 1916 by Columbia Records, it was written by actor Harry C. Browne and played on the familiar depiction of black people as mindless beasts of burden greedily devouring slices of watermelon."

The song even begins with a skit about ice cream:

The melody of the song, as Johnson notes, is "nearly as old as America itself." It was probably first heard in the British song "The (Old) Rose Tree" before becoming "Turkey in the Straw" in the 19th century. But the tune became popular because of blackface minstrel shows.

In the 1820s, the song was rewritten as "Zip C--n," a song about a blackface character by the same name. Johnson explains, "The character...propelled minstrel shows to the height of their popularity."

"There is simply no divorcing the song from the dozens of decades it was almost exclusively used for coming up with new ways to ridicule, and profit from, black people," Johnson writes.

As for how "N----r Love a Watermelon Ha! Ha! Ha!" ended up playing in ice cream trucks around the country, opposed to "Turkey in the Straw" or "Do Your Ears Hang Low?" Johnson writes:

"19th century ice cream parlors played the popular minstrel songs of the day...A music box was installed in [ice cream trucks] as a way to announce their presence in neighborhoods. Naturally, the traditional minstrel tunes of the previous century were employed to evoke the memorable parlor experience."

Jezebel, where we first saw the story (H/T Jezzie!), sums up the history lesson best:

"I think issues like this are confusing for some (white) people to digest—'Oh, so we can't have ice cream anymore!? So ice cream is racist now!?!?'—so, in the service of productive discourse, let's look at this another way. Yes, you may still have ice cream. No, ice cream is not racist...Yes, this is still worth talking about. Conversations like this are important because they illuminate the myriad ways, overt and covert, that racism is built into American culture."

In summary: Ice cream is not racist. This song probably is. And now you know!

PHOTOS: I scream, you scream, these celebrities are screaming for ice cream!