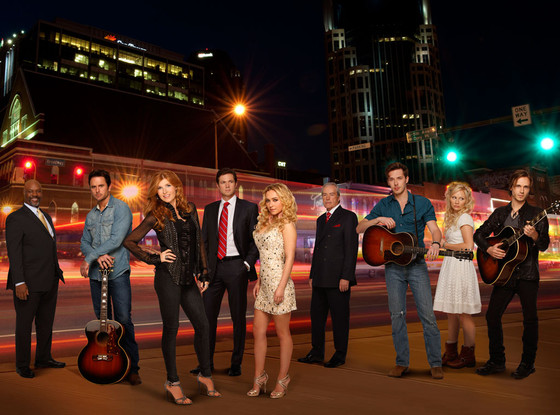 Thank you, TV Gods, for the gift that keeps on giving: Connie Britton!

After spending five years in TV's best marriage on Friday Night Lights and then squatting in the worst house ever for a year on American Horror Story, you would think Britton would want to take a bit of a break from the grind that is the TV world. Wrong. Instead, she decided to team up with Heroes' star Hayden Panettiere for ABC's new soap Nashville.

Wait, it gets better: the show is good. Like, really, really, good.

As this point, the Friday Night Lights and American Horror Story alum is the Meryl Streep of TV. To quote Modern Family's Cam (Eric Stonestreet), she could play Batman and be the right choice. She is one of TV's most likable and talented stars and Nashville showcases all of her best qualities and highlights one talent we never knew she had: singing!

Yes, in addition to those acting chops and that hair, Britton can sing, y'all! Britton is pitch-perfect as Rayna, a country music superstar (think Faith Hill), whose career isn't what it used to be now that she has to compete with the likes of spitfire Juliette (Panettiere, displaying one of the best beyotchy smirks on TV), whose pop sound is dominating their airwaves. (Think Taylor Swift if she had a lot of daddy, mommy and all other kinds of issues.)

But it's not all country music and diva battles on Nashville. Rayna's also struggling with her home life. Her husband Teddy (Close), who we felt was kind of lackluster in comparison to her longtime bandleader/former beau Deacon (Esten), is running for major with her the support of her father (Boothe), the most powerful (and possibly corrupt) businessman in town. Honestly, we weren't expecting the show to pack such a juicy political punch.

Of course, complicating things even further is the fact that there are still some serious sparks flying between Rayna and Deacon, something the calculating and conniving Juliette, who is something of a man-eater, is well aware of. Thankfully, Juliette isn't all attitude (clichés are no fun, right?), and when you learn what's haunting the tiny blonde, the surprising scene tugs at your heartstrings.

However, the biggest surprise of the series comes in the form of another blonde crooner: Bowen as waitress/aspiring musician Scarlett, who, along with Palladio's barkeep Gunnar, steal the entire episode with their haunting cover of The Civil Wars' "If I Didn't Know Better." Yes, we've been checking iTunes daily hoping their cover will magically appear.

Check out our fancy and brand new TV Scoop page!

Verdict: We're booking a one-way flight to Nashville, a worthy successor to Revenge's timeslot, and never looking back.