Did Prince Harry Shut Down Facebook Page After Scandal? Here's the Naked Truth About Spike Wells 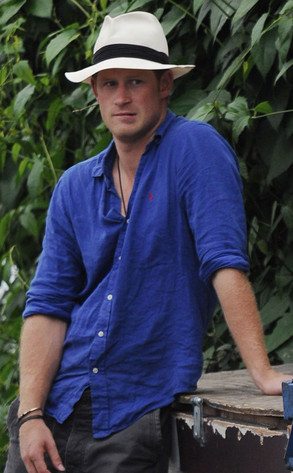 We're not sure which piece of news is worth mulling over more: that Prince Harry has reportedly, in the wake of the scandalous leaking, mock reenacting, general ogling and relentless dissection of his naked Las Vegas photos, shut down the Facebook account we never knew existed, or that said account was created under the pseudonym Spike Wells (now there's someone who sounds like they know how to party).

Of course, given that the palace is trying to cap this runaway story any which way they can, coupled with the royal family's penchant for (until now, at least) maintaining their privacy during public media storms, we have yet to get definitive word on whether or not Spike Wells was indeed Harry's doing.

But we have our suspicions. And more than that, we have enough evidence for you to decide for yourself.

However, let's get formalities out of the way first: a spokesperson for the prince told E! News that reports of his suspected once-active, now-frozen social media page aren't something they would comment on "given the private nature of the topic."

Now, while it would hardly be surprising if he had a page (he may be third in line to the throne, but he's also 27 and living in this modern social world, after all) he almost certainly wouldn't be so unthinking as to use his real name.

Enter the mysterious Spike Wells, whose account was created roughly four years ago.

Prior to this weekend, Wells' account was active and boasted more than 400 friends. All close personal ones, we're sure.

While Wells used extremely high-privacy settings on his account, some aspects of his page were still visible to the public at large and the page has long been under suspicion by royal-watchers in Britain. Coupled with the timing of the page's deletion (if the tabloids are to be believed, purportedly at the behest of Harry's personal adviser), it certainly seems like a link exists.

And while conspiracies have been born from less, it's not quite as tentative a connection as just that. In fact, tentative is the last word we'd use.

Find out the identity of Harry's unlikely public defender

Prior to the page's deletion, "Spike"—incidentally, an oft-cited nickname of Harry's, and even the security name he's known as by his Scotland Yard minder, according to London's Telegraph—was quite the globetrotting playboy, posting photos of his travels and parties both in England and beyond. So he was well-to-do.

Then there's the matter of none of the profile or public photos posted by the user ever showing Spike's face, though his build was notably similar (identically so?) to the prince. During his Las Vegas trip, too, the profile picture was changed to show three young men in matching Panama hats (Harry's chapeau of choice during his trip) standing in front of a hotel suite that, as it's been pointed out, bears an uncanny resemblance to the MGM Grand hotel suite Harry stayed in last week, which was the site of his now-infamous debauchery. 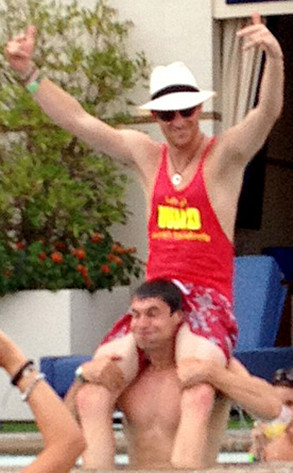 The Telegraph also points out that some of the photos posted to the page in the past include various African animals (Harry is a frequent visitor to the continent), and his profile indicates that he is from Maun, Botswana—curious not only for someone who seems to be almost exclusively friends with billionaire Brits in their 20s, but because Harry and his ex-girlfriend Chelsy Davy visited the town together back in 2007.

Further fueling the speculative flames: a photo of a redheaded child posted to the profile with the comment, "Oh my God, I'm ginger." Another photo showed a group of people wearing Angry Birds hats. Harry himself was famously (and adorably) photographed in one over the summer. On yet another photo, though the faces were obscured, two people looking eerily like Harry and Chelsea were shown together.

Perhaps the most denial-proof shot, however, showed a faceless man in arctic conditions holding up a Union Jack flag that bore the logo of Walking With the Wounded. We're not sure that one even requires an explanation, but here it is anyway: Last spring, Harry infamously joined the charity trek and even made international headlines when he was temporarily stranded with the North Pole-bound trekkers.

So there you have it. Is Spike Wells Harry? Let's just say, if not, the prince might be making headlines once again. For identity theft.

Check out more hot pics of Spike—er, Harry—in our Royal and Rugged gallery