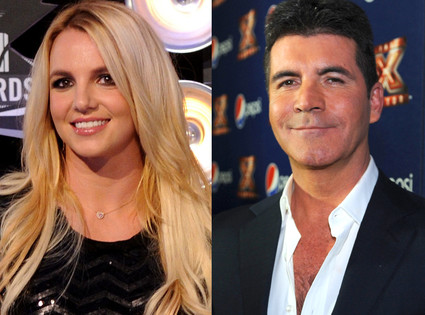 Britney Spears and Simon Cowell are about to become TV's next power couple. The pop princess is thisclose to signing a big-bucks deal to become a judge on X Factor, multiple sources have exclusively confirmed to E! News.

After weeks of heavy negotiating, Britney's team has finally agreed to a $15 million fee for the role. "Both camps were back and forth on the money but now they have finally come to agreement on the fee," says one insider with intimate knowledge of the pending deal. "That was the big sticking point and now, thankfully, it's been sorted. All they need to do now is work out the smaller points. The fact the money is now set, means that there is nothing stopping this from becoming a reality."

And this will be a package deal: coming along for the ride with Britney is fiancé Jason Trawick.

A second source reveals that her soon-to-be husband (who is also petitioning to become her coconservator), will become a producer on the show. "Jason is expected to be there every day Britney is on set. He is her rock and will help guide her through the process. He is the person she trusts the most," the second source tells us.

The deal will make Spears the highest paid judge on reality television, eclipsing Jennifer Lopez's $12 million deal for American Idol. Barring any last-minute snafus, Spears will fill one of two X Factor judging vacancies after Cowell fired Paula Abdul and Nicole Scherzinger at the close of the show's first season.

A rep for the X Factor would neither confirm nor deny whether Spears was even being considered. A Fox rep had no comment. However a production insider tells E! News that "this is an exciting time for [Britney]. It'll be a fun project and she is welcoming the chance to mentor up-and-coming artists. She loves the idea of helping emerging talent get the recognition they deserve and is really looking forward to being on the show."

"She gets on very well with Simon. He has worked hard at persuading her to start this new chapter in her career. She is an icon, and the perfect example of what having the X Factor means.

"She's really looking forward to the project and being able to connect with her fans."

Britney is expected to start her new role in the middle of May but there's no word yet on who will fill the final spot, according to the show source.

MORE: Britney Spears Offered $10 Million for X Factor, but She Wants How Much?!

"The decision of who will join Simon, Britney and L.A. is yet to be made. Simon really wanted Britney confirmed first. Once she signs, he can make the final preparations."

In a conference call, which took place before Spears' deal was imminent, Cowell waxed lyrical about his new judge, "The fact that she's one of the most talked about—not just pop stars, but people—in the world today means that you've got this star power. She's still hot, she's still having hit records, and she's still controversial. There's a reason for that."

UPDATE April 12, 2012 at 2 p.m. PT: Another source familiar with the negotiations tells us that Trawick will not become a producer of X Factor once Spears signs on.