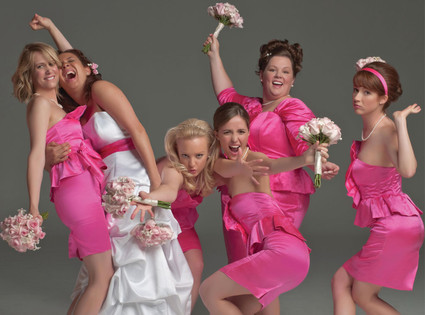 In the end, the magic number was nine. Smaller than last year, larger than other years.

But it still wasn't big enough for Bridesmaids, which found itself, as laugh-out-loud comedies usually do, on the outside looking in at the Academy Awards' Best Picture race.

A quick take on Oscar-nomination morning's big snubs and surprises:

MORE: How'd the SAG and Oscar snubs match up?

1. No Bridesmaids?! Judging by its nominations for Melissa McCarthy (Best Supporting Actress) and Kristen Wiig (Original Screenplay), the R-rated blockbuster was deigned an Oscar film. It just wasn't deigned a Best Picture film. The Dark Knight, The Hangover and a couple of generation's worth other Oscar-slighted crowd-pleasers can relate.

2. What Happened to The Girl With the Dragon Tattoo?! What's been happening all awards season. The David Fincher film hits, and then it misses. In typical fashion, it missed out on a few of the big categories, namely Best Picture and Best Director, but hit it big in Best Actress for Rooney Mara, and came away with a respectable five nominations overall.

3. What Happened to Harry Potter?!  Oh, what always happens to Harry Potter come Oscar time: not much. And while Deathly Hallows: Part 2 arguably didn't get a send-off befitting the world's most-successful franchise, the final chapter earned three nominations (Art Direction, Makeup and Visual Effects), the most for a Potter film since the first chapter, Sorcerer's Stone.

4. What Happened to Leonardo DiCaprio?! When DiCaprio and Armie Hammer bagged Screen Actors Guild nominations last month, J. Edgar still had the aura of a contender. But when the aura faded, so did its stars' chances. J. Edgar is the first Clint Eastwood-directed drama to be completely shut out of the Oscars since 2002's Blood Work.

5. No Pixar?! For the first time since the 2006 Oscars, the studio will not contend for Animated Feature—and it didn't compete that last time because it didn't have a film with which to compete. Pixar, of course, did release a film in 2011: Cars 2, the most only critically trashed Pixar film ever. So, technically, this non-nomination is neither a surprise nor a snub.

6. What the What Are A Cat in Paris and Chico & Rita?! Two under-the-radar movies that got more votes for Animated Feature than Steven Spielberg's surprisingly omitted epic, The Adventures of Tintin.

7. You're Gonna Have to Rent The Tree of Life?! Yes, sorry, to break it to you, but Terrence Malick's opus about something-or-other ended up as a top nominee, with nods for Best Picture and Best Director.

8. Where Did Extremely Loud and Incredibly Close Come From?! The 9/11 drama, which was ignored by the Hollywood guild awards, only to end up with a Best Picture nomination, came from the Department of Tom Hanks and Sandra Bullock Made a Movie That Was Totally Made for Awards Season, and Was Not Going to Be Ignored (and, Hey, Voters Probably Liked It, Too, So Sue 'Em).

9. How Did Hugo Do It?! If you bet The Artist would score the most nominations, then you forgot The Artist is a silent movie. (There go the sound categories…) You also forgot or denied that Martin Scorsese's Hugo is a fantastic-looking movie that would be rewarded for looking fantastic. The latter's abundance of tech noms made up for its dearth of acting noms.

10. No Elton John vs. Madonna Smackdown Rematch?! For starters, Madonna's Golden Globe-winning "Masterpiece" simply wasn't eligible for Original Song. (It played too late in her movie, W.E., to qualify.) As for John, voters apparently just didn't like his Gnomeo & Juliet tune, a snub the music legend shouldn't take personally. (Even though a tweeting-sad Mary J. Blige did.) Voters didn't like much of anything. (No, not even Blige's "Help" ballad, "The Living Proof.") Under Oscar rules, songs have to achieve a certain score or rating to make the nominee field. And this year, just two songs, The Muppets' "Man or Muppet" and Rio's "Real in Rio," hit that mark.