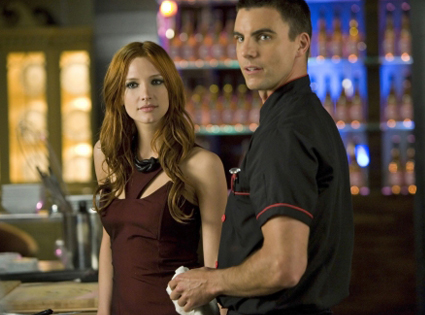 One day you're happy as a clam, working as a castmember on a prime-time network drama, and the next day someone's feeding you a line about changes in your show's "tone" and shuffling you off to Buffalo.

That's what just happened to departing Melrose Place star Colin Egglesfield, who sums up his roller-coaster Thursday this way: "I've had better days, to be quite honest."

We just spoke to Colin exclusively to find out why he's being pushed out of the show, not to mention where Auggie fits into the show's big murder mystery, and despite what you may have theorized, Auggie's not getting killed off, and despite what you may have been told, this exit was not planned from the beginning: "[They said it] was a network decision and obviously the ratings aren't what they need or want them to be, so they're going to try things to shake things up."

So what really happened today, and what's going to happen next on Melrose Place? Here's what we learned from Colin: 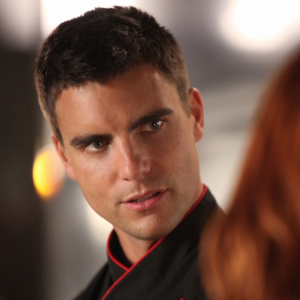 You were initially hired to be an ongoing series regular on Melrose Place, right?
Yes, definitely. I was slated to be in 10 of the 13 first episodes, but I had a multiyear contract.

What happened to change that? How did you learn they weren't going forward with you and your character?
I got the call this morning from our producers, Todd [Slavkin] and Darren [Swimmer]. They were really saddened, and you could tell it was difficult for them to break this news to me. They said it was a network decision, and they said the network thought Auggie was a little too dark, with his alcoholism. They felt like in the landscape of Melrose they wanted to change the tone of the show. So that's the explanation that they gave me.

And this morning was the first you'd heard of it?
They said that it wasn't anything against me or my talent or anything. There was never any discussion that they weren't sure what they were going to do with me or my character. And it wasn't like I was getting in fights with crew members or punching people out.

It's an odd decision, because we just did a poll yesterday about favorite Melrose Place characters that aren't Ella, and Auggie was the winner.
That's the thing—I don't know. It's kind of crazy. It's like, how?! Why?! I'm not spending too much time thinking about it, because it'll just drive you crazy, if you try to figure something out that you're never going to figure out. I'm just focusing on [other stuff]. I've already got a bunch of auditions lined up.

Was your agent or manager told anything else or anything different about what happened?
No, that's what they were told as well: that it was a network decision and obviously the ratings aren't what they need or want them to be, so they're going to try things to shake things up, but why they chose this, I don't know.

Story-wise, there's the murder mystery, although I could have sworn we already absolved Auggie of killing Sydney Andrews. Is this a twist thing? Are you the killer of Sydney Andrews who must be punished?
The way in which I'm leaving the show, I'm not being killed off, I'm just leaving. It keeps the door open for, potentially, my character to come back, but who knows?

Based on what we've seen so far, Auggie's feelings for Riley and his mentorship of Violet are his main storylines—do those continue or does Auggie turn in another direction?
Auggie's relationship with Riley (Jessica Lucas) comes to a head next week. She feels like hanging out with me puts too much pressure on her relationship with Jonah (Michael Rady), so that makes me upset. And then something happens at work where I get in this fight with Marchello, the head chef, my boss. So, a relationship with a girl that I am in love with isn't working out, and my career is not working out, and the only other thing Auggie has is his alcohol, so we see Auggie face the decision of whether or not to hit the bottle again. And, of course, Violet (Ashlee Simpson-Wentz) is in the mix. She always seems to creep up, you know, in all the different weird places—and she does that here, too. So there's a lot of really cool stuff coming up.

Are you done with the show for now, or are you still in the middle of production?
I'm shooting one more episode, and we start shooting that on Monday.

Do you have anything you want to say as a farewell to the fans and the people you've worked with?
Todd and Darren are great, I love those guys and they've always been straightforward and straight shooters and just great people to work with. I respect the decision that they had to make creatively to do what they need to do—I'm just frustrated that I'm not going to be a part of the show, because it was such a great job and a fun place to go to work every day. I'm disappointed to be leaving because I became really good friends with not only the cast of Melrose Place but many of the crew as well, so that's sad, to not be able to go see them at work. But hey, I'm still friends with them, and I'd just like to say to everyone out there who's been watching and supporting, thanks from the bottom of my heart, because this is something that I love to do.

So what do you think, kiddos? Did the network slaughter the right sacrificial lamb in their attempt to appease the TV gods and redeem Melrose Place? Could they have done something different or better with Colin's character? Are you feeling better or worse about M.P. right now? Hit the comments below!

Get more scoop from star Katie Cassidy on Melrose Place's big death, and then take a trip down memory lane with our Melrose Place: Where Are They Now gallery?

Visit Fancast to watch full episodes of your favorite shows and get the top TV quotes of the week.