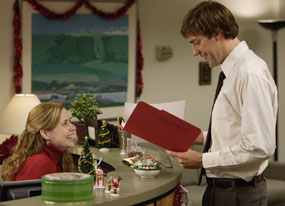 Wanna know who’s getting everything they want this Christmas—or a big ol’ lump o’ coal in their stocking? Well, I happen to have a direct line to the man up North (Santa Claus, not baby J.) and have checked in on some of our favorite—and not so favorite—TV peeps, to see how they stacked up on the great list. Below, you’ll find a countdown of the naughtiest and nicest from 2006.

10. Angela Martin of The Office
No one, and I do mean no one, can kill the Christmas spirit like the baby-loving, Birkenstock-knocking, she-devil of Dunder-Mifflin’s Scranton office: Angela Martin. From her too-tight bun to her too-tight, um, buns, this stubborn and judgmental priss can put the kibosh on fun like nobody’s business. Of course, she’s also ridiculously entertaining to watch, and without her, we’d never know that orange is a whorish color, so she isn’t all bad.

9. "Beaver" Casablancas of Veronica Mars
Yes, he was the victim of sexual and emotional abuse, and yes, he had the misfortune to be Dick's brother. But dude, once you mess with Mac and try to kill Keith, you are so far past the point of no return. Beaver had a lot to offer the world—we'll miss what he could have been, but not what he became.

8. Warner Bros. (for Letting Amy Sherman-Palladino Go)
I’m sorry, as much as I adore the new creative team and have watched and enjoyed every episode of Gilmore Girls this season, I still miss the original voice of Lorelai and Rory. ‘Nuff said.

7. Sally-Lovin' Sally
According to a new study by the Transportation Research Board, Los Angeles has the worst traffic in America, with the average annual delay per traveler clocking in at 93 hours. For those of us in the entertainment industry who cover red carpet events, you can tack on an extra 903 hours spent waiting for my previous blind item, Self-Lovin’ Sally, to get out of her limo and grace us with her presence. All I want for Christmas are those hours back, Sally!

6. D'Anna Biers/Three of Battlestar Galactica
Tricksy D'Anna is on a deadly murder-suicide rampage, not to mention craftily undermining supercouple Six and Gaius with her torrid Three-somes. The other six Cylons can't keep crazy Three on a leash much longer. They should zero her out as soon as possible, before someone else steps in to do their dirty work for them...

5. Jack Donaghy of 30 Rock
He’s pompous, he’s degrading and he appears to be dating Condoleeza Rice, with whom he fantasy role-plays, but draws the line at trying to make Abu Ghraib sexy. I’m talking, of course, about Jack Donaghy of 30 Rock, Liz Lemon’s schmuckalicious producer who has the best one-liners on television, from his idea of a compliment—"You have the boldness of a much younger woman"—to his rationale for wearing a tuxedo: "It’s after six. What do you think I am, a farmer?" Come on, Rock fans, has any other naughty boy made you laugh harder than Alec Baldwin this season? Didn’t think so!

4. Officer Michael Tritter of House, M.D.
David Morse's Tritter is a bah-humbug bully who has wrecked House's happily dysfunctional home. Brother Wilson is a mess, mama Cuddy is freaking and worst of all, the pressure pushed surrogate daddy House to punch out Chase. Heck, even mobsters don't involve the wives and children. Here’s hoping persecution-happy Tritter will be rubbed out, and soon!

3. T-Bag of Prison Break
Rotten teeth. Sewn-on hand. Creepy southern drawl. I’m sorry, but no other character on television makes my skin crawl at the very sight of him like our beloved T-Bag! And of course, he’s committed a slew of ghastly, unmentionable evils this year, so something tells me Santa won’t be bringing him a pony.

2. Bad-Year Bob
Some of you may remember Bad-Day Bob as the subject of a Blind Vice I gave during a Vine show back in May. As the story went, Bob "had a bad day and made one of our reporters here at E! burst out into tears during an interview." Well, let me just tell you that apparently, as it turned out, it was a bad year for Bob, ’cause his behavior went from bad to worse (his placement on this list just above a serial killer should tell you something) and caused problems for him both personally and professionally.

And the naughtiest TV contender of the year is….

1. Sylar from Heroes!
I know a lot of the people on this naughty list have some bad habits, but this dude eats brains. That’s just wrong. He’s also scary as all hell—so much so that the very mention of him is enough to have your ear hair stand at attention. And in case you didn’t get the memo, his killing spree has only just begun. Now, that’s naughty!

10. Showtime
Remember when HBO was the only pay cable channel you just had to have? Well, that reign has ended thanks to Showtime’s homegrown goody Weeds and the deliciously devious Dexter. Both critically acclaimed and insanely addictive, a few years back, you’d just assume they belonged on HBO. But these days the Home Box Office is canceling quality comedy like The Comeback and picking up losers like Lucky Louie instead. It’s a good thing we have other off-net options!

9. Dexter of Dexter
Yes, you heard me right! Dexter of Dexter! And while I can certainly understand how many of you might think he belonged on the naughty list (you know, being a serial killer who chops people up into itty-bitty bits and pieces and all), I personally think Dexter deserves a little praise for not being the entirely evil man he could have been, which we saw when we met his (spoiler alert if you didn’t see it!) blood relative in the season finale. Sure, the guy is troubled. But at least he’s preying on the bad guys. Now, pardon me while I prepare myself for eternal damnation for saying that.

8. T.R. Knight and Katherine Heigl
Pardon me for playing favorites, but these two just so happen to be my favoritest TV big shots to interview, because they’ve managed to stay so incredibly cool and grounded amid all the craziness that comes with being on a hit show. And of course, Knight deserves extra props for the way in which he came out, under less than desirable circumstances.

7. TV Downloads
Remember when you had to buy grainy, staticky and, and, oh yeah, illegal bootlegs off eBay if your trusty VCR failed to record The X-Files? Those days are no more, thanks to the combined powers of iTunes, YouTube and broadband. The ability to buy or borrow great shows while trapped behind a desk is nothing less than a godsend for TV-loving couch taters!

6. America Ferrera of Ugly Betty
Onscreen and off, this girl truly is unhateable! Whether she’s charming the pants off the millions of viewers who watch Ugly Betty every Thursday night or girl-talking with me behind the scenes and asking for the latest Hollywood and TV gossip, she’s just adorable. Really.

5. Damon Lindelof of Lost
I know I’ve spent way too much time gushing about D.L. over the past two and a half seasons of Lost, so I’ll keep this short and to the point: Damon Lindelof remains the nicest and most sincere producer in Hollywood—at least, when it comes to his dealings with a certain pesky, spoilery member of the press who shall remain nameless (me).

4. NBC (for Hanging on to Studio 60 and 30 Rock)
Four months ago, Tina Fey and Matthew Perry were supposed to save the Peacock net from the fourth-place nightmare they’d been living since Must-See TV went bye-bye. But unfortunately for them, quality doesn’t always bring quantity. Both SNL-related shows have found themselves in the ratings-challenged category, and yet, the NBC brass went ahead and ordered a full season of both. Yes, that’s right, the network is actually giving America a chance to catch on! That’s a mind-blowing concept and one that deserves major brownie points.

3. Masi Oka of Heroes
I dare you to find a nicer actor in Hollywood. Go on. Seriously. I dare you to try! Masi is without a doubt the real deal (gracious and sincere) and of course, totally endearing and hilarious as Hiro Nakamura and the best addition to mainstream television this year.

2. "Jam" of The Office
They’ve had about, oh, two or three minutes of screen time together this season, but I’m sorry, no other television duo gives more warm fuzzies per screen shot than Jim and Pam of The Office. I just love them. And I mean, loooooove them. And if they don’t get married and have babies before this series ends, it will be one of the gravest injustices ever known to television viewers. They top this nice list, because onscreen and off, John Krasinksi and Jenna Fischer are just about the nicest people you’ll ever meet. And together, they form a mathematical equation that will make your head explode if you try to quantify it.

1. You
Sorry to go all Time magazine on you (I know, I know, and I don't even have a mirror on the cover), but I just can’t help but stop and give kudos to you, my beloved tuberinos and readers of this column, who stuck it out when things got rough (the redesign was not easy on anyone—nor was Bradley Cooper’s engagement) and helped to make 2006 another year where I can still say I have the best job ever. Thank you.

(And of course, feel free to comment below with who shoulda been on this—or who shouldn't have.)