An NFL player is suing United Airlines over an alleged sexual assault that occurred on a flight from Los Angeles, Calif. to Newark, New Jersey in February.

According to court documents obtained by E! News, the anonymous athlete and another male passenger filed the lawsuit against the airline at the Los Angeles Superior Court on Monday. In the court documents, the NFL player alleges he was sexually assaulted and harassed throughout the flight, despite requesting help from two flight attendants.

His alleged experience with the female passenger began when they boarded the plane and she took her window seat in the same row as the two John Doe's. Upon boarding, the men claim she began to harass the athlete and appeared to take issue with his wearing a mask. "Assailant began hitting John Doe 1's arm and elbowing him. Assailant accosted John Doe 1 and told him that he was 'frightening,' ordered him to move to the front and use the air in the front of the plane because he was sick," NBC reports.

The men also suggested that the woman was under the influence of prescription drugs as they saw her taking pills and noticed she seemed "disheveled and unbalanced." 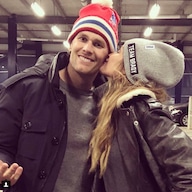 Further into the flight, the men claim she began to "grope" the athlete, who was in the middle seat. In response, the football player "patiently pleaded for assailant to stop and removed her hand" from his knee.

In addition, John Doe 2 asked a flight attendant for assistance on two separate occasions, but was ignored.

Both men claim that the female passenger was only asked to stop when they told a second flight attendant.

After this the woman allegedly placed her hand on the football player's penis, at which point he left his seat to again ask for help.

The other anonymous man claims that she then moved into the athlete's empty middle seat and groped his genital region.

Eventually, the athlete returned with a flight attendant and the assailant was moved into an empty row, as they claim she was still being disruptive.

The two men are suing United Airlines for damages, because they allege that the company refused to release the names of the flight attendants and the female passenger. "This matter is about accountability; not just from United but the assailant as well," the men's attorney stated. "Those with a duty to others should be held accountable for their failures to uphold their responsibilities. Those who report assaults should not be ignored, but believed, their claims investigated, and appropriate action taken where warranted."

In a statement to E! News, United Airlines stated, "The safety and well-being of our customers is always our top priority. In this instance, the customer involved was moved to a different seat. Because litigation is now pending, we're unable to provide further comment."