Are You Not Entertained By These 20 Secrets About Gladiator?

"What we do in life echoes in eternity."

And 20 years later, Gladiator still holds up as one of the most popular movies of all-time, with Russell Crowe and Joaquin Phoenix both delivering career-making performances in the 2000 hit film.

With a budget of $103 million and lots of tension on set as the script was constantly being worked on, expectations were high for esteemed director Ridley Scott's epic action adventure about Maximus (Crowe), a general-turned-gladiator looking to avenge the death of his wife and child.

Bu Gladiator received the thumbs up from critics and movie-goers, going on to gross over $450 million worldwide, becoming the second highest-grossing movie of the year, and winning five Oscars.

Still, it wasn't an easy journey to get there, with Crowe famously clashing with the screenwriter on-set, Phoenix, who played Commodus, one of cinema's greatest villains, almost dropping out of the film and, one actor tragically dying during production... 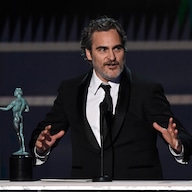 Here are 20 behind-the-scenes secrets you might not know about Gladiator in honor of its 20th anniversary... 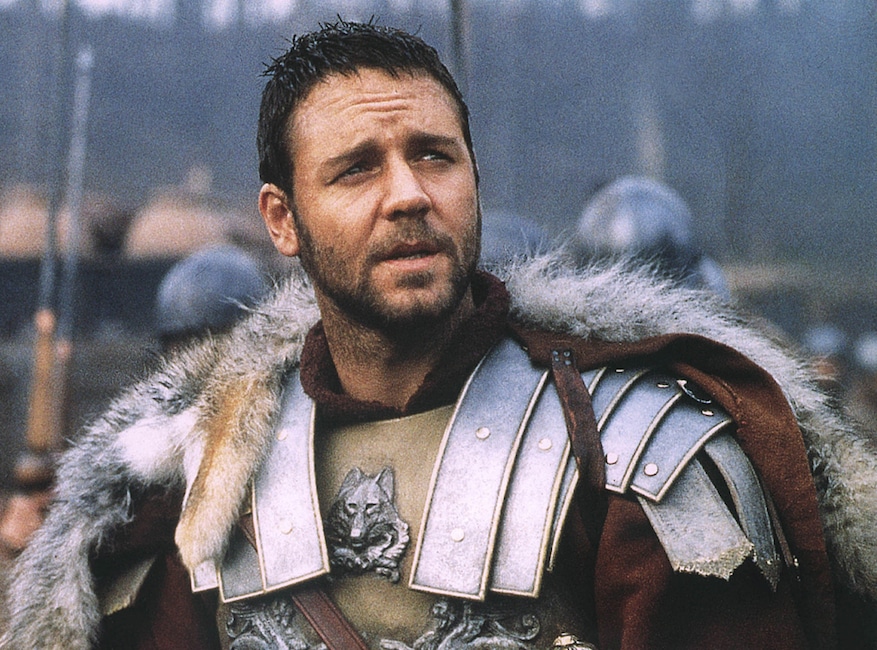 1. In the initial script, the main character was Narcissus, the real-life man who strangled Commodus to death. While most of the film's characters are real ancient figures, Maximus was fictional.

2. Ridley Scott was convinced to direct after being shown Jean-Léon Gérôme's 1872 painting Pollice Verso (Thumbs Down). "That image spoke to me of the Roman Empire in all its glory and wickedness," Scott said. "I knew right then and there I was hooked."

3. Mel Gibson was first offered the lead role, but reportedly turned it down as he felt he was too old at 43 years old. 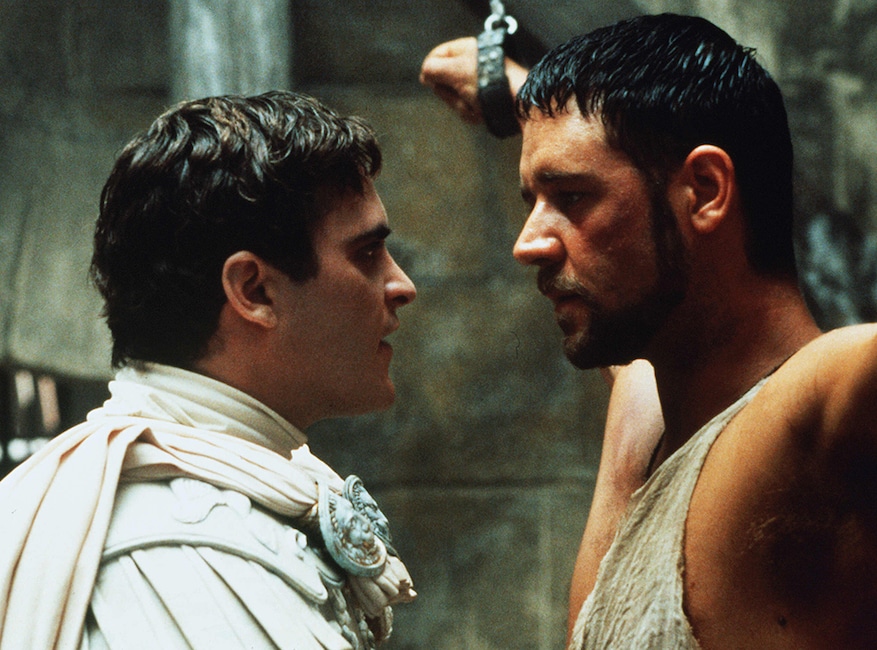 4. Phoenix came close to leaving the movie even after cameras had started rolling, admitting to Collider, "I think that probably Gladiator was one of the most intimidating because the first set that I went on was just massive...I went to [Ridley Scott] and said, 'I don't know what to do, I just can't do this. I don't know what you're gonna do. This just isn't gonna be possible." And Ridley was really smart. He just shot me for four hours and he didn't put film in the camera."

5. To help calm a then 25-year-old Phoenix's nerves, Crowe and Richard Harris decided to get him drunk.

"It was actually Richard Harris' idea," Crowe said, "because Joaquin was very nervous on the set and I went to Richard and said, 'Mate, what are we gonna do with this kid, he's asking me to abuse him before takes.' So Richard says, 'Let's get him pissed.'"

6. Known for the extremes he will go to for a role in his career, Phoenix kept a sword in his hotel room and gained weight. 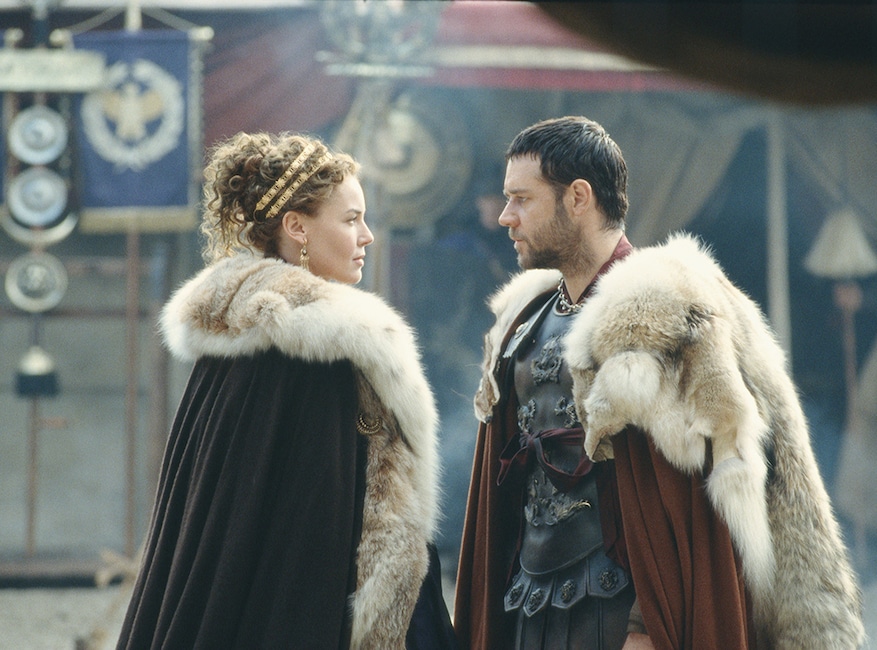 7. Vegan for most of his life and a vocal animal activist, Phoenix refused to wear leather sandals.

8. Jennifer Lopez reportedly auditioned for the role of Lucilla, which ultimately went to Connie Nielsen.

9. The ring Lucilla wears in the film was actually found by Nielsen and was 2,000 years old.

10. "Am I not merciful!?" One of Commodus' most iconic lines was ad-libbed by Phoenix in the moment. 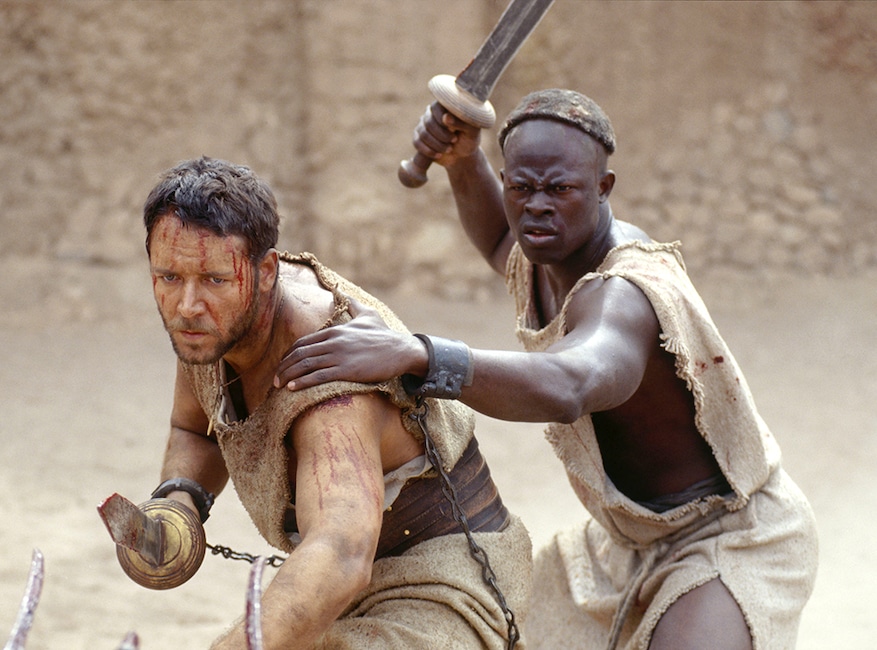 11. Oliver Reed, who played Proximo, died during a break from filming after suffering a heart attack. Production ultimately used CGI and body doubles to complete his remaining scenes and changed his character's fate; in the original script, Proximo lived, while he ultimately died in the final version of the film.

12. Crowe was unhappy with the script throughout filming, often refusing to say lines, including, "I will have vengeance, in this life or the next."

Screenwriter William Nicholson confirmed rumors of tension on set, telling the Daily Mail, describing one conversation the pair had.

'"Your lines are garbage, but I'm the greatest actor in the world and I can make even garbage sound good,'" Crowe reportedly told Nicholson, who said, "And the funny thing is that it's true. OK, the lines weren't garbage and he was a bit aggressive, but he is a great actor, so his occasional fits of arrogance didn't bother me at all." 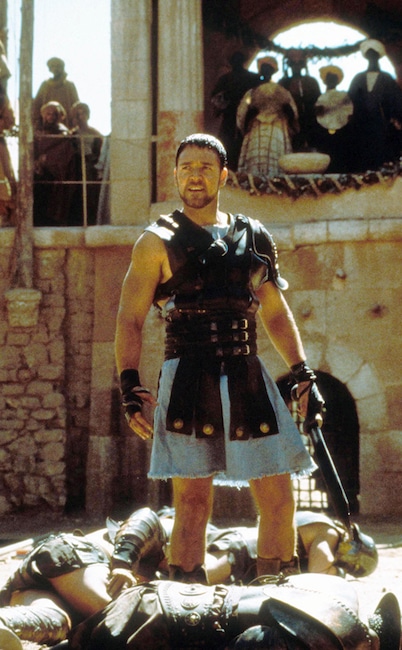 13. Crowe suffered "many" injuries on the set, detailing the impact filming had on his body during his appearance on Inside the Actor's Studio.

"Lot of blood, lot of blood, lot of grazes, you know, I mean, I've still got, a lot of little scar here and one under here on this elbow, a discoloration of the skin that is directly to Gladiator," be said. "I've had Achilles tendons go out, knees go out, both shoulders, this shoulder's actually had an operation on it. Um, you know, I've got a lower back thing that just won't go away, and that's from a couple, sort of, fall impacts during fight sequences or whatever. I've got a rib up here that pops out every now and then which is not very comfortable."

14. Jude Law reportedly screen-tested for the role of Commodus, but Phoenix was Scott's No. 1 choice from the start. 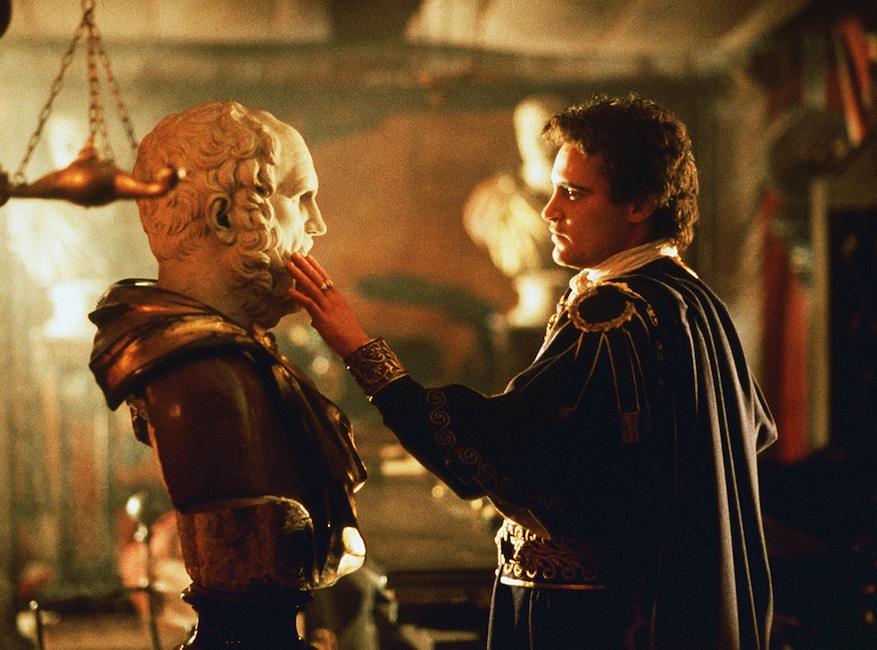 15. Game of Thrones star Jack Gleeson said he based Joffrey Baratheon, one of TV's most disliked villains, on Phoenix's performance as Commodus.

"Joaquin Phoenix's Commodus in Gladiator; certainly for my characterization of Joffrey, that had a big impact, the smirk," he told EW.

16. To fill out the massive audience, 2,000 extras were used, with 33,000 more being computer-generated to fill out the arena. Plus, over 27,000 pieces of armor were created for the film, with production going on to recreate one-third of the Coliseum.

17. Lou Ferrigno was originally cast as Tigris of Gaul, but was replaced during production by Sven-Ole Thorsen. "I auditioned twice, I had the part," he told Red Carpet TV News, claiming Arnold Schwarzenegger stepped in to have Ferrigno replaced because he was "more of a threat." 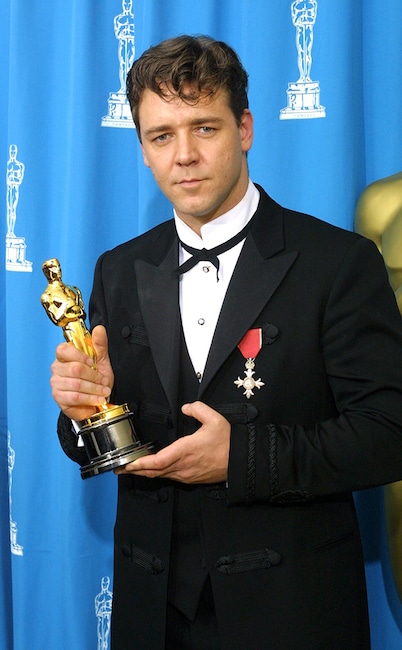 19. Scott married Giannina Facio, who played Maximus' murdered wife, in 2015, 15 years after the film was released.

20. A sequel has been in the works for years, with producers confirming they were working with Scott on the project. "It picks up the story 30 years later…25 years later," Walter F. Parkes told HeyUGuys in 2018.