The Bachelor's Peter Weber is setting the record straight.

If you haven't already heard, Victoria Fuller, a contestant on the current season of the hit ABC reality series, came under fire for previously posing in an advertisement apparently promoting marlin conservation, which featured "White Lives Matter" phrasing. Earlier this week, Cosmopolitan Editor-in-Chief Jessica Pels announced in an online letter that the magazine would no longer be publishing a digital Cosmo cover of Fuller, her prize for winning the challenge of Monday night's episode.

"It's been reported that what she modeled for was actually a Marlin Lives Matter organization focused on preventing white and blue marlin from being overfished, which used 'white lives matter' and 'blue lives matter' messaging on its promotional shirts and hats. In my view, the nature of the organization is neither here nor there—both phrases and the belief systems they represent are rooted in racism and therefore problematic," Pels wrote.

"Unequivocally, the White Lives Matter movement does not reflect the values of the Cosmo brand. We stand in solidarity with Black Lives Matter, and any cause that fights to end injustices for people of color. My team and I had many long discussions about how we wanted to address this issue. We'd already printed the fashion shoot in our March issue, complete with an inset of the cover, and of course the episode had already been filmed. Ultimately what felt right was choosing not to publish the digital cover on our website or social feeds, and simply being honest with you, the audience we respect, about what happened and where we stand." 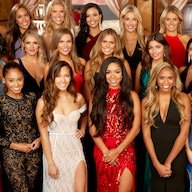 When asked about the situation in a BUILD Series interview, Weber said he couldn't "really speak too much on it because I don't really know many facts about the whole situation" and noted he "just recently heard about that with the cover being removed" and that he "knew nothing" during the moment.

However, he did vouch for Victoria, saying, "All I can speak on is the time I was able to spend with Victoria throughout this experience and I truly enjoyed my experience with her. I really feel like she's, you know, she's a good person and she's got a lot of endearing qualities and I just hope that people can form their opinion on her based off what they see between the two of us and her time on the show. She's not perfect. I'm not perfect. No one's perfect."

Now, Weber has addressed the controversy again, making clear that he does not support the campaign.

"It's definitely been tough to see this unfold. To be honest I'm learning about all of this in real time just like everybody else is," he told People. "At this point right now, I see a lot of headlines about my response, and my support has been taken out of context. I in no way support that kind of campaign."

While the reality star said it's important to let Victoria comment on the situation and that he doesn't want to "speak on her behalf," Weber added, "My only problem is that I would never support any campaign like that."

According to People, Fuller previously commented on Instagram about the campaign, writing, "Hello bachelor clues & followers! It would be nice for you to gather all facts before jumping to bash someone. The company ‘We Love Marlins' is in support of catching white, blue, and black marlins & releasing them back into the wild. In regards to a sensitive topic, I come from a very diverse background & am in support of all races! Virginia Beach is a VERY large fishing town where Marlin tournaments are held every year! Glad to clear this up..."

She also wrote in an Instagram response, "I definitely see how this could be offensive. I apologize immensely it was never my intention to lessen this matter."