If Nicki Minaj could do it all over again, she probably wouldn't have engaged in that Twitter war with Meek Mill.

The 37-year-old rapper opened up about her public feuds during a Q&A session at the Pollstar Live! conference in Beverly Hills, Calif. on Wednesday.

The topic came up after the "Super Bass" star was asked to give some advice to developing artists.

"Keep your eye on the bigger picture is what I would say," she said, per Variety. "If I had to, I would have redone the whole thing and just kept my mouth shut. Put my music out and shut the hell up."

After the interviewer, Irving Azoff, jokingly asked Minaj if she'd done any tweeting today, the celebrity quipped she was going to use the "good old hack excuse."

"Listen, it never fails," she said, per the media outlet. "Every time I do it, five minutes later, I'm like, why the f--k did I...? Every single time. But it's a good lesson in knowing how to master your anger and emotions. So, every time I do that, I like give myself a talking to in my head, like, 'OK, you played yourself, you shouldn't have did that. You learned your lesson again.' How many times did I learn that lesson? So, I gave myself that talk today, sir."

These tweets weren't the only ones to make headlines. Back in September, Minaj tweeted that she'd "decided to retire." However, she's since made it clear she isn't stepping away from music.

She then encouraged her viewers to take a break from their social channels, too.

"Have you noticed when you take social media off your phone, you, as a person, feel happier or more at peace?" she asked. "You guys really should try it, I promise you. Because it's too much of just nonsense and nothingness and looking at what everybody else is doing and comparing yourself to people when you're having a great life. You are having a great freaking life. People didn't wake up this morning. We're good. And then we go on social media and make ourselves depressed."

She reportedly concluded this thought by saying "social media is a tool" and that "it can be your best friend or your worst nightmare." 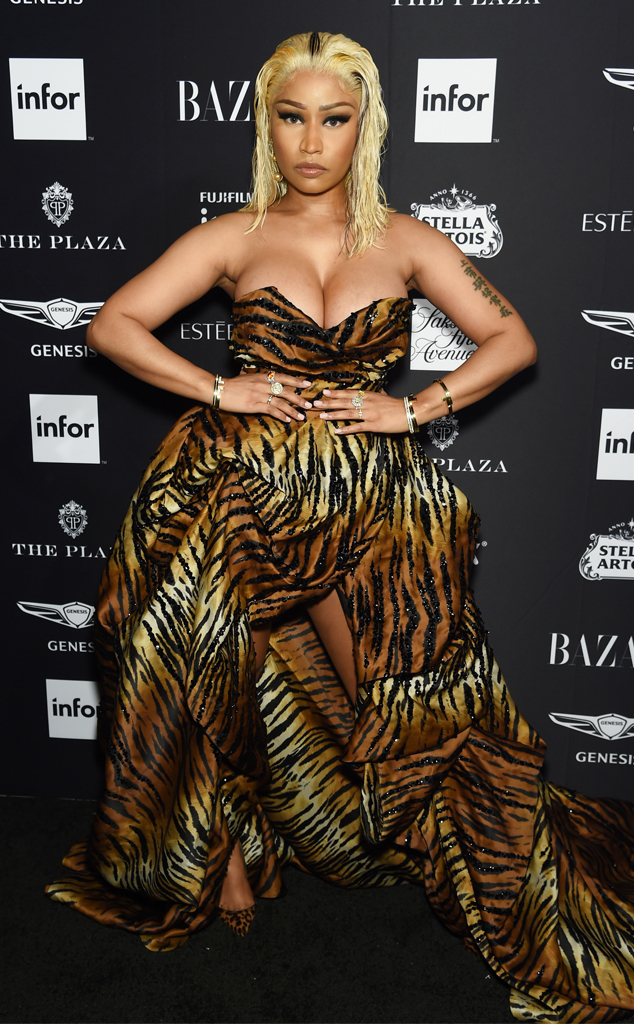 In addition to talking about social media, Minaj reflected on her catalog of music.

"I wish I never recorded 'Anaconda.' I like the video but ugh," she said. "My first-ever solo song on Billboard was 'Your Love.' To this day, I hate that. I like the video, but I hate the song. I can go on and on. I hate ‘Starships.' I mean, like, ew. 'Starships are meant to fly?' I was like, why did I do that?"

She also opened up about her relationship with husband Kenneth Petty after an attendee asked how she maintains her confidence.

"The truth of the matter is, I'm not as confident as people think...I'm such the opposite," Minaj said, per Variety. "I really am. But lately I think the thing that has changed in my life the most… when you marry someone that lifts you up, whenever I'm down, I feel like I can have one conversation with my husband and it'll just get me back to where I need to be mentally. He's been a really great force in my life. I've known him since I was 17 and I think I feel a level of comfort with him that I hadn't felt before to just be myself and to share who I am. He's seen my lows and I don't have to walk around with makeup in the house. I can just be me."

While she reportedly added that "you do not need a man," she also claimed "there's no greater feeling in the world" than having a partner who "lifts you up."

There was also a touching moment when she was asked about the late Kobe Bryant.

"I can't imagine what his wife is feeling—to lose your husband at such a young age but your child, too," she said while tearing up. She later added, "We love you, Kobe and to your wife, to your family and your friends, we are praying for you guys."