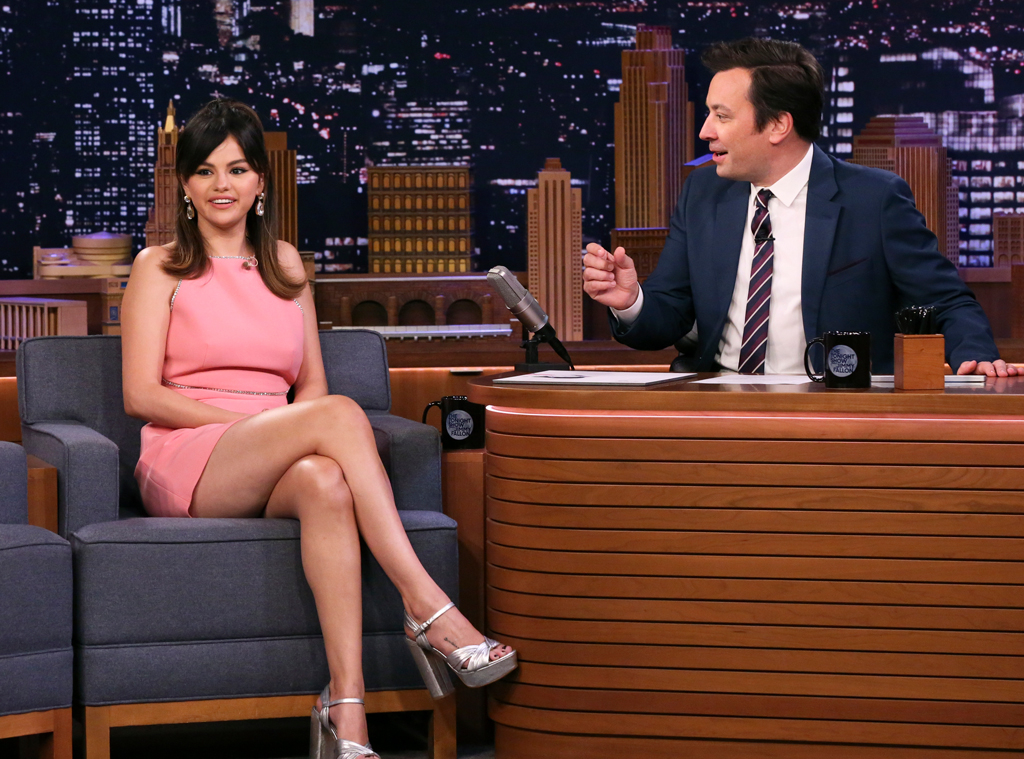 During an appearance on Monday's The Tonight Show Starring Jimmy Fallon, the "Lose You To Love Me" singer revealed to host Jimmy Fallon that there are more songs she recorded that didn't make it to the final version of her new album Rare.

Released on Friday, Jan. 10, the 27-year-old star put 11 new songs out into the world to join the previously released singles "Lose You To Love Me" and "Look At Her Now." But as she told Fallon, "There's a few other songs that I couldn't help but want to exist."

As the star continued, "I can't really tell when, but one of my favorite tracks is called 'Boyfriend.' So, I can't wait for people to hear that one."

Funnily enough, one of her ex Justin Bieber's most famous songs is also called "Boyfriend." And Rare is filled with tracks that appear to be about Gomez's take on their 2018 breakup.

Rihanna, Selena Gomez & Drake Look Like What? - What the Fashion

"Lose You To Love Me" seems to be the biggest example of that. Her first No. 1 single, Gomez told Fallon that she felt the need to finally give her side of the story with that song.

As she revealed, "There came a point in my life where there were so many things being said on my behalf, and I found myself protecting people that didn't really protect me, but I had a right to say my side of the story. And I felt like that was so liberating because it almost felt like I had let it go, personally, inside of me once it was out."

Another liberating feeling came with the album's titular track. As the pop star revealed to the host (and as she shared in her interview with Spotify just before the album release), the word "rare" was empowering for her.

"We worked on 'Rare,' and I just said before we finished anything, 'This is gonna be the name of my album,'" Gomez told the SNL alum. "The word is so special, and it means a lot. And I think in this time where everyone is obsessed with feeling like they need to look the same way or get things done or whatever it may be. Obviously, I don't judge, I'm just saying there are some girls who are hurting because they feel like they don't fit in, but this word is eliminating that, because you weren't meant to look like everyone else. You're meant to be who you are, and that's unique and that's rare."

Other than confidence and self-love, Fallon wanted to know what else the star hoped people would take away from her new music.

As Gomez shared, "What was most important for me with this record was to make sure that every single song, whether it was the lyrics or the production, to mean something and to actually hold weight."

"One of my favorite songs is 'Vulnerable' on the album," she continued. "It was a way of me hoping that I could just be a voice for people who are in the same situation I'm in, whether it's something mentally that people struggle with, or relationships, friendships. I wanted to be as honest as I could, and the only thing that I wanted was to make people feel good. During all the mess that's happening, I think that I'm very lucky to be in a position to make people feel good."

Now, check out the rest of the interview to hear how Gomez and Wizards of Waverly Place helped inspire Billie Eilish's "Bad Guy."