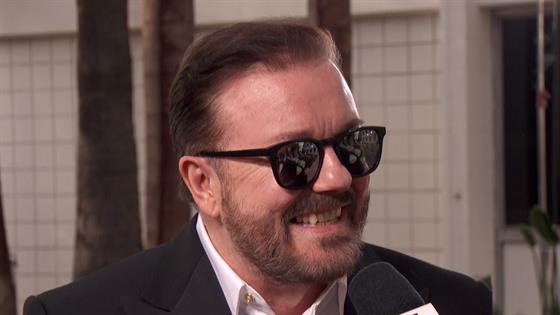 Well, that was easy!

On Sunday, Ricky Gervais took to Twitter to commemorate his record-breaking fifth time hosting the 2020 Golden Globes—and, in true Gervais fashion, he didn't hold anything back. Acknowledge the response to his envelope-pushing monologue, The Office alum thanked fans for their support and admitted that he's happy his final hosting gig has come to an end.

"Thanks for all your amazing comments about my Golden Globes monologue," he wrote. "Best reaction ever and that means a lot to me. I had a blast but thank f--k it's over, so I can get back to my real job of editing #AfterLife2 and touring #SuperNature. Make Jokes, Not War."

Gervais also had a hilarious response to a recent survey that found viewers want him to host the show every year. Seeing the results from Gold Derby's poll, he tweeted, "Never gonna happen." Throughout the monologue, Gervais made sure to stress that this was his last time taking the coveted role, telling the crowd, "I don't care anymore. I'm joking, I never did."

Like the comedian's past Golden Globes monologues in 2010, 2011, 2012 and 2016, Gervais' opening remarks were filled with zingers aimed at the show's star-studded attendees and the year's biggest pop culture moments. One of his most memorable jokes came courtesy of Felicity Huffman and the college admissions scandal. "I came here tonight in a limo, and the license plate was made by Felicity Huffman," he joked, which was met by an audible reaction from the audience.

Unfazed, he continued, "No, shush. It's her daughter I feel sorry for, OK? That must be the most embarrassing thing that's ever happened to her, and her dad [William H. Macy] was in Wild Hogs."

Then, he addressed criticisms that people of color were snubbed in the major categories by saying, "The Hollywood Foreign Press are all very, very racist." There also wasn't a shortage of Jeffery Epstein-Prince Andrew jokes, which didn't appear to go over well with the crowd.

Best Actor nominee Leonardo DiCaprio also found himself in the crossfire with a joke regarding his dating history. The After Life star quipped, "Once Upon a Time in Hollywood, nearly three hours long. Leonardo DiCaprio attended the premiere and by the end, his date was too old for him."

After roasting the movie Cats and cracking a joke about Dame Judi Dench's reason for joining the project, Gervais shamed the celebs in the room for being fake woke, a joke that Tom Hanks, who received the Cecil B. deMille Award later in the evening, didn't seem particularly fond of in the moment. The funnyman said, "If you do win an award tonight, don't use it as a platform to make a political speech, right? You're in no position to lecture the public about anything. You know nothing about the real world. Most of you spent less time in school than Greta Thunberg."

Before heading into the show, Gervais set the tone for his monologue on the red carpet. Speaking to E!'s Ryan Seacrest, he said, "I'll do the same old thing that I always do. I just hope they're more used to it now. That's what I'm hoping." He also joked that insulting people to their face is his version of an "extreme sport."

"They're gonna enjoy it more than me and I'm going to say awful things about them," Gervais teased. "That's my extreme sport, you know what I mean? Some people do drugs and some people jump out of planes. I say awful things to their face and see what happens."