Once upon a time in Hollywood, the biggest stars in television and film partied all night long.

But the real festivities kicked off after the cameras stopped rolling. At the slew of after parties, there were reunions, toasts and, of course, a lot of dancing. And, E! News was there for every moment, ready to give you an all-access pass to Hollywood's most fun night. So, without further ado, here's what you missed... 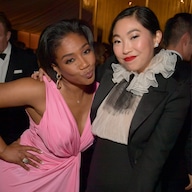 At the Beverly Hilton, Moet and Chandon were flowing as guests snacked on egg rolls, fried chicken sliders and meatballs catered by Craig's restaurant. And, on the dessert menu: Sweet pizzas and an ice cream bar. Once Upon a Time...in Hollywood's Brad Pitt and Leonardo DiCaprio celebrated the film's big win with The Irishman's Martin Scorsese and Robert Di Niro. "Brad was in a great mood and very social with everybody," an eyewitness told E! News. On the dance floor, he happily took selfies with fans before disappearing into the crowd.

Meanwhile, Jennifer Aniston was "inseparable" from Jason Bateman's wife, Amanda Anka, and Sandra Bullock. Aniston and Bullock even danced to Madonna's "Holiday" together. Added the insider, "It was cute!" Elsewhere, DiCaprio chats on a couch with girlfriend Camila Morrone and her mom Lucila Solá while Scarlett Johansson and Colin Jost catch up with Greta Gerwig and Billy Eichner. Plus, there was a Vampire Diaries reunion as Nina Dobrev hung out with ex Ian Somerhalder and wife Nikki Reed. Other guests included Portia De Rossi, Ellen DeGeneres, Pharrell, Laura Dern, Rami Malek and Lucy Boynton.

Pitt and Aniston reunited with a quick hello and cordial conversation. "They approached each other once they saw each other inside and looked happy as they started to hug and say hello," explained the eyewitness. "They were trying to be low key." Meanwhile, Kerry Washington had an absolute blast during her girls' night out. She danced to Beyoncéhits and was later joined on the dance floor by Reese Witherspoon! Together, they danced to Usherand Justin Timberlake. Daniel Craig, on the other hand, refused to dance—then accidentally dropped his cocktail on the floor.

Jennifer Lopez and Alex Rodriguez mingled about the party, stopping to chat with Aniston, Witherspoon, Rachel Weisz, Alba and Guy Osery. Added the insider, "Everyone wanted to talk to J.Lo!" Elsewhere, DiCaprio and Morrone hung out with her mom and stepdad Al Pacino while Nina Dobrev danced and chatted with Derek Hough and his girlfriend Hayley Erbert. Timothée Chalamet roamed about the affair while Lily Rose Depp sat at a table with some girlfriends. She later exited the party solo.

As she left the bash, Johansson thanked Billie Lourd, shouting, "I love you" as she got into her car with Jost. Later in the evening, the police arrived after a guest passed out inside. 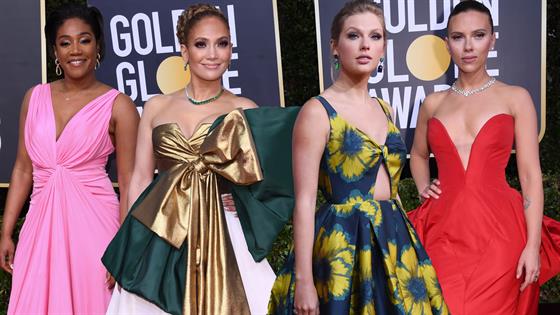 The star-studded event at the Beverly Hilton brought out Henry Winkler, Elgort, Helen Mirren, Larry David, Awkwafina, Mitchell and many more. After arriving together, Jason Momoaand Lisa Bonet said hello to Mirren, with Momoa giving the superstar a kiss on the cheek. He then made his way over to the bar with some friends. Shortly after, Zoë Kravitz entered the bash and immediately headed over to her stepdad. The trio chatted as a family before Momoa and Bonet met with some executives.

A ravenous Kiernan Culkin sat at a table solo while he chowed down on food. Later, he was joined by his Succession co-stars, including Sarah Snook and his onscreen mom Hiam Abbass. Meanwhile, Awkwafina took selfies with fans, Shay Mitchell raved about her newborn daughter and Chris Harrison hung out with his girlfriend Lauren Zima. 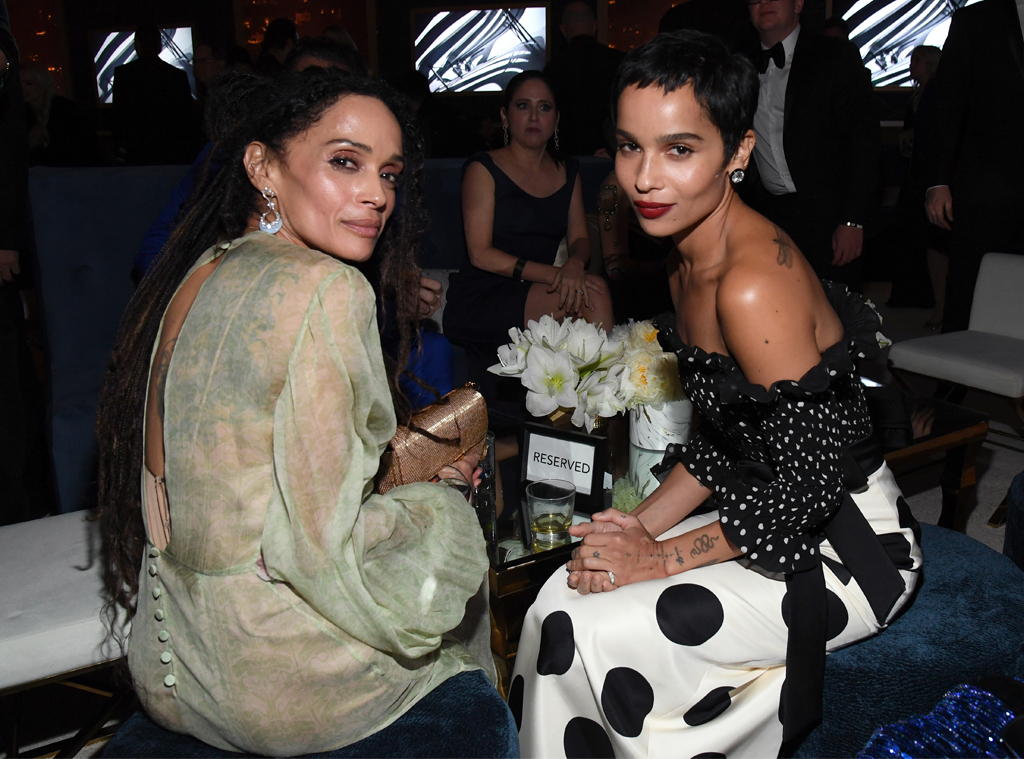 Ariel Winterand boyfriend Luke Benwald only had eyes for each other at the Beverly Hilton. As Oasis' "Wonderwall" played, the actress led her love onto the dance floor. She sang along and was fist pumping in the air to the catchy tune. As the evening went on, the duo stayed put on the dance floor, singing and dancing as the DJ played hit after hit. She raised her glass in the air when Lizzo's "Truth Hurts" came on and, during J.Lo's "Ain't It Funny," she was grinding up on her man, later turning her face toward his so they could share a brief kiss.

Bachelorette's Hannah Brown was "ready to have fun," said a witness while Bella Thorne let loose with some girlfriends, laughing and drinking while on the dance floor. Kate Beckinsale and Machine Gun Kelly talked at length, making intense eye contact before Thorne interrupted their conversation. Meanwhile, Paris Hilton arrived hand-in-hand with a date. "She was touching and rubbing his neck," added the insider. "They later left together." Other guests included Laverne Cox, Nicole Scherzinger, and Skylar Astin. 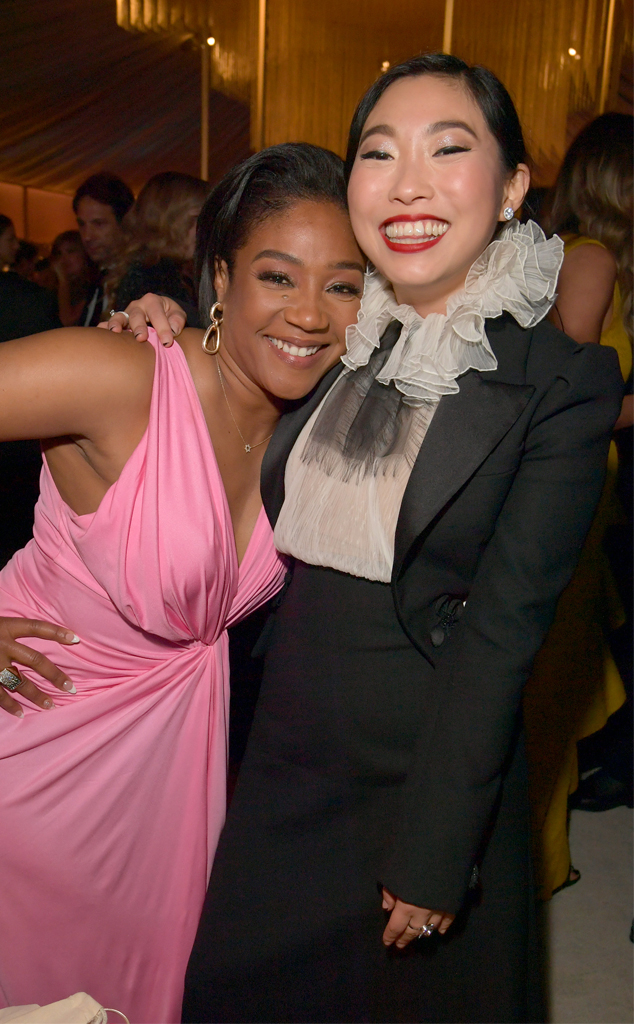 To celebrate their big wins, stars including Quentin Tarantino, Renée Zellweger Laura Dern stopped by the HFPA Golden Globes party to get their statues engraved. "It was a total traffic jam!" an insider joked. For her part, Olivia Colman partied with her trophy in one hand and a glass of white wine in another. After her statue was complete, she clinked her glass with a bystander. While Joaquin Phoenix stood in line, love Rooney Mara patiently waited nearby. At one point, he tapped her on the shoulder, rubbed her back and kissed her cheek, noted the eyewitness.

It's always a marvelous event when the cast of The Marvelous Mrs. Maisel shows up. Even Jon Hamm was excited to chat with the comedy stars. But the real star was Fleabag's Phoebe Waller-Bridge. As she made her way through the party, well-wishers, including Connie Britton, offered their congratulations to the winner, who thanked everyone she passed. Eventually, she crossed paths with Awkwafina and the duo, according to an insider, were "genuinely excited to greet each other." Clutching their trophies, they embraced.