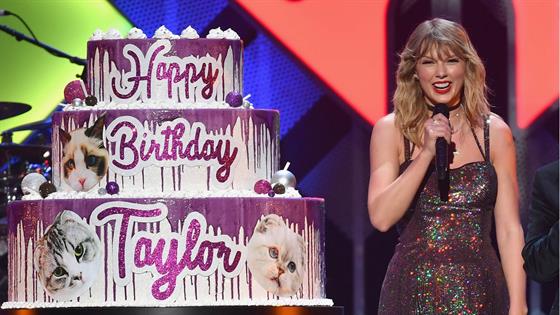 …Ready for it? Taylor Swift's 30th year is shaping up to be her best yet.

On Sunday, the "Lover" singer announced that she'll be headline the 2020 Glastonbury Festival in the U.K. This isn't just any performance. She'll be taking the coveted Pyramid stage to celebrate the festival's 50th anniversary, which is a pretty amazing milestone if you ask us.

The five-day already-sold-out festival kicks off on Wednesday, June 24, 2020 and ends on Sunday, June 28, 2020, which is when the Grammy winner is set to perform.

Swift made the announcement via social media with an epic selfie. Holding a flyer for the festival that reads "From Christmas Tree Farm to Worthy Farm," she expressed her excitement and gratitude with her fans. "I'm ecstatic to tell you that I'll be headlining Glastonbury on its 50th anniversary," Swift wrote. "See you there!"

In an official statement on Twitter, Glastonbury founder Michael Eavis said, "I'm so pleased to announce Taylor Swift will be headlining the Sunday at Glastonbury 2020. She's one of the biggest stars in the world and her songs are absolutely amazing. We're so delighted."

The "Reputation" singer isn't the only legend that will helping the beloved festival ring in its 50th birthday. Sir Paul McCartney and Diana Ross will also be on board to celebrate. For his part, The Beatles alum will be headlining the Saturday show and Ross will be playing the "Legends" slot on Sunday before Swift. The Friday headliner has yet to be announced.

I’m ecstatic to tell you that I’ll be headlining Glastonbury on its 50th anniversary - See you there! 💋

"They passed around red Santa hats that said 30 'Thir-Tay' on the front," an eyewitness told E! News. "Everyone wore the hats and danced up a storm. There was fun music playing and everyone was singing along and having a blast. They had drinks and there was lots of toasting and hugging going on. Everyone was so happy to celebrate Taylor."

As if this year couldn't end on an even better note, Swift was recently named the Artist of The Decade by Billboard and the American Music Awards. While accepting her award at the AMAs, she said, "The last year of my life has had some of the most amazing times and also some of the hardest things I've gone through in my life and not a lot of them are things that haven't been public."

"And I wanted to thank you so much for being the thing that has been a constant in my life," she continued. "Like, this industry is really weird. You feel like your stock is either up or down and people either like you or they don't or you're feeling bad about yourself. But the people that hang in there for you are the ones that you will never forget."