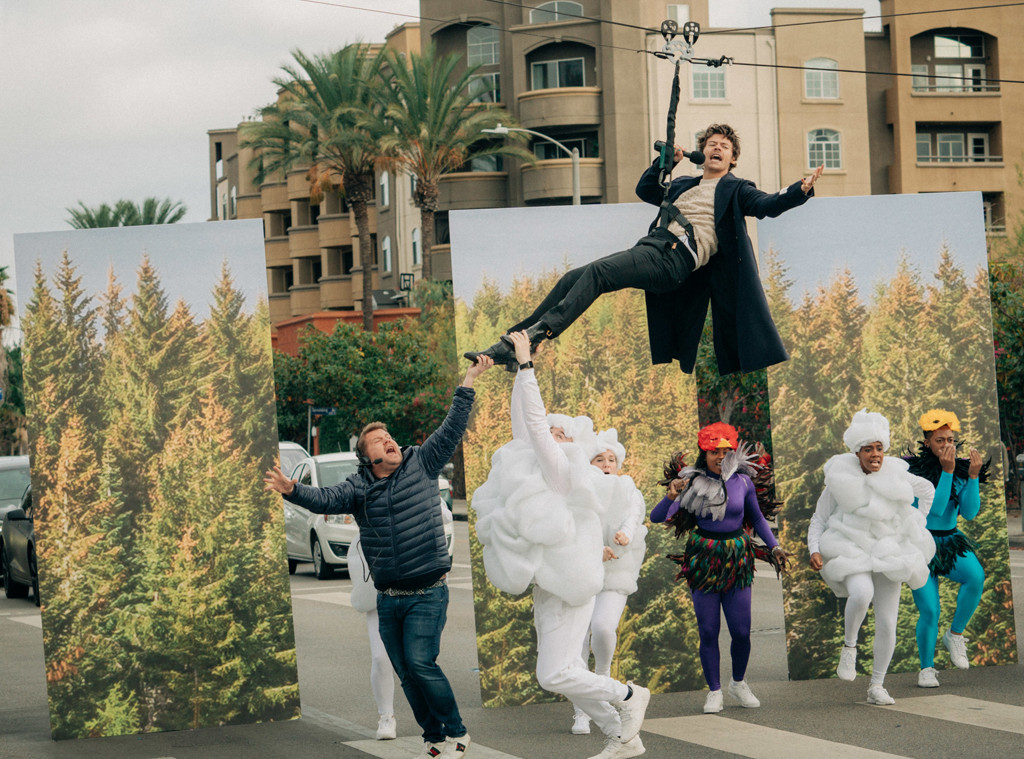 James Corden's Crosswalk Musical just got a makeover. Introducing the Crosswalk Concert! Its first star? Why, none other than Harry Styles, of course.

During Wednesday's The Late Late Show, Styles (who guest hosted the show earlier this week) took to the crosswalk outside the CBS studios in Los Angeles to perform some of his hit songs. Although, he didn't think it was such a great idea at first.

As the star said to the camera, "I love James, but there's no way I'm doing this. It's an insane idea." Corden's response? "Insane? You know who didn't think it was insane? The Beatles. What do you think Abbey Road was all about? That was the first ever crosswalk concert. And Paul wasn't wearing shoes."

Then, speaking directly to the "Watermelon Sugar" crooner, the host quipped, "Think about it, Harry. You're always saying you're better than The Beatles. This is your chance to prove it." As Styles responded, "I've literally never said that."

Finally having convinced the singer, the first thing on Corden's agenda was promotion for the concert.

The two Brits walked through the streets of L.A. handing out fliers to drivers. Handing out the pink papers to unwitting people, Styles quipped, "Hello, there's a show today. Don't know why."

Naturally, the fliers were hilarious. The photo on them showed a younger Styles posing with a dog and smiling, with his name incorrectly written as "Harry Stiles" on some and with Justin Bieber's face on others.

Still, the show must go on! The first song performed was "Kiwi"—the sexy track from the artist's debut solo album. Although apprehensive at first, once the music started, Styles lit up the crosswalk by dancing between cars and shaking his booty on one car's hood. It was, as they say, a whole mood.

Next up was the first single released from Styles' second album, Fine Line, out tomorrow. As Corden said to the camera, "The next song, 'Lights Up,' is about self-acceptance and the freedom that comes with being open and vulnerable—a theme that, I feel, is best represented by modern dance. You're welcome."

Styles took to the crosswalk in his all-black outfit, while Corden donned an all gold, winged costume that he had a magical time twirling around in.

After running out of the crosswalk once the light turned, Styles told the camera, "It's a fine line between insanity and genius, but I'm beginning to think that James might just be a genius." Cue Corden walking by in a giant watermelon costume. As the star continued, this time less confident, "Like I said, it's a fine line."

The late night host was, of course, dressed as a watermelon so they could perform Styles' "Watermelon Sugar." The singer and the sea of dancers dressed as watermelons then took over the crosswalk and absolutely nailed the number.

But the big finale came when Corden had the 25-year-old perform "Sign Of The Times." Giving a shout out to the music video, Styles was suspended on a zipline and coasted across the sidewalk while belting out the song. He got stuck halfway through, however, so Corden and the dancers dragged him by the feet across the rest of the street.

Now, stop you're crying and watch the full video to witness the first ever Crosswalk Concert.