Adam Rippon Wins Dancing With the Stars, But He Won Our Hearts Way Before With These 8 Moments 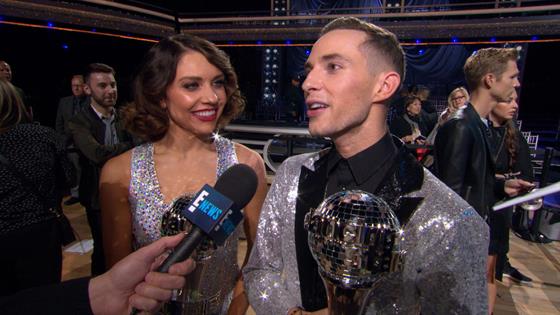 Adam Rippon has finally won the gold…the glittering mirrorball trophy that is! On Monday, Rippon took home the title of this season's Dancing With the Stars' winner and both the ice skater and his fans couldn't wait to celebrate.

While the win was well-deserved, we've been fans of the Olympic figure skater for a while now. His appearance on DWTS was the cherry on top for fans who fell in love with him during the 2018 Winter Olympics this past February. There are numerous moments that have cemented our love for Rippon over the past year and yet we're only going to share his top eight characteristics and memorable moments below.

There is a lot to love about the hilarious 28-year-old star and plenty of times he's won over our hearts. Clearly, winning DWTS and killing it with his dance moves is one of the most iconic memories we'll have of Rippon, but it's not the only one…thank goodness.

Relive some of the dancer/skater's sweetest and most outrageously lovable moments below. Make sure to vote for the time Rippon won you over and became your favorite U.S. athlete in the poll as well!

His crushes are all of our crushes:

Rippon has a tendency to keep it real which is why when he appeared on The Ellen DeGeneres Show in March and talked about boys we were so on board. He opened up to the talk show host about his celebrity crushes and Jake Gyllenhaal and Harry Styles made the list. He then shared that Shawn Mendes was on his mind or bed (we're not exactly sure) and we can't stop laughing at his honesty.

"Here's the thing, I was sleeping on Shawn Mendes…not literally…I didn't realize how cute he was!" he told DeGeneres, confusing her a bit by his lingo. "I know Harry will be upset, but…love is a funny thing." 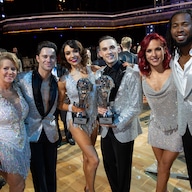 What Feud? Adam Rippon, Tonya Harding and Dancing With the Stars Cast React to Those Pesky Rumors

Couldn't decide on a caption, so here are four - pick your fav! #1 (porn)Stars on Ice #2 Blades of Glory-hole #3 I'm not Nancy Kerrigan and he's not Tonya Harding but he does make me a lil weak in the knees... #4 Ice Queens

He has the best bromance with Gus Kentworthy:

After making history as the first two openly gay athletes from Team USA to compete in a winter Olympics, Rippon and skier Gus Kentworthy have become great friends. They banter on social media, give each other Instagram and Twitter shout outs and make us laugh in the process. They are the best friend duo we didn't know we needed.

He stands up for his beliefs:

Whether it's calling out Vice President Mike Pence, or shutting down haters on Twitter, Rippon has strong beliefs and he's ready to fight for them. One of the best examples of this was when the skater fired back at people on Twitter who wanted to see him fail at the Olympics. He tweeted an empowering message that read, "To all those who tweet at me saying that they 'hope I fail,' I have failed many times many times in my life. But more importantly, I've learned from every setback, proudly own up to my mistakes, grown from disappointments, and now I'm a glamazon bitch ready for the runway."

😈 On to the long program tomorrow! #uschamps18

He's already got some medal cred:

In case you forgot Rippon is an Olympian. He made his Olympic debut as a men's figure skater at the 2018 winter Olympics and from the moment he stepped on the ice we were hooked. He ended up taking home a bronze medal for his portion of the team's event, but he'll always be a gold to us.

His interviews give us life:

Throughout the Olympics and beyond, Rippon has always brought it when it comes to giving interviews. Our favorite interview moments however came from his time in PyeongChang. "I'm sort of a ghetto skater," he said in one of his NBC Sports interviews at the event. "I'm always down for a little hocus pocus," he later said. It's just a bunch of hocus pocus indeed!

His love for Reese Witherspoon:

Really, who doesn't love Reese Witherspoon? The answer is no one, she's adorable and totally lovable just ask Rippon. During the Winter Olympics, Witherspoon tweeted about Rippon as "Reason #1" to watch the games and of course Rippon replied to her mention of him. That was the beginning of their social media love, which was followed up by an official meeting on The Late Show With Stephen Colbert and it was magic.

"I really needed this today—meeting Reese," he told the show's host, "because when I got out here, my life was in shambles." He had lost a button on his shirt, but seeing Witherspoon made it all better. "I'm embarrassed, but I'm not," he said. "Do you know what I mean?"

The Legally Blonde star was equally as happy to meet her Olympic crush in person saying, "This is meant to be. This is the relationship the world has been waiting for."

Not only is Rippon's friendship with Kentworthy something to see, but his friendships with everyone are pretty spectacular. When he was offered to be an NBC correspondent for the rest of the Winter Games (after his portion was over) he turned it down to stay in the Olympic village. "I worked so hard to be on this Olympic team, and my teammates and my friends were there for me during my events and that meant so much to me, that I really feel like I need to be there for them during their events as well," he said at the time.

That team spirit and strong belief in being a good friend has continued outside of the village. In fact, he's been rooting for his longtime friend Mirai Nagasu both on Olympic ice, on DWTS and beyond and we're big fans of his kind words for her. "You are one of the most thoughtful people I've ever met. I consider myself INCREDIBLY lucky to be your friend," he tweeted after Nagasu was eliminated on the reality series. "Getting to tour, do DWTS, and live in the same apartment together will ALWAYS be some of the best memories I'll have and I can't wait to make even more together ❤️."

So excited to dance tonight. I love you, @dance10jenna ❤️

His costumes are legendary:

Coming back to DWTS, Rippon definitely made a statement every time he took the stage. Not only did he prove that he has angelic dance skills, but he showed off a lot of epic costumes. Seriously, we need to raid his wardrobe, or at least costume chest (we have one of those, is that weird?) ASAP.

PS: He is hilarious on Twitter. We know we said there would only be eight great moments in this post, but Rippon's funny tweets are too good to not include. Check them out now and prepare to laugh:

Mood: Unknowingly wearing my shirt inside out until 5 minutes ago

I going to take an AncestryDNA test and I really hope it says #BillHader is my father.

Describe yourself in two words pic.twitter.com/FMzFxTfJLo

Even if Rippon hadn't won the athlete's season of Dancing With the Stars these hilarious and honest moments throughout his career would've won us over time and time again. Vote for the time you first started rooting for Rippon below.

Adam Rippon's Lovable Moments
Which of Adam Rippon's memorable moments made you one of his fans?
TAGS/ Shows , People's Choice Awards , E! Shows , Top Stories , 2018 People's Choice Awards , Dancing With The Stars , Olympics
GET POP CULTURED!
*Email entered incorrectly. Please try again.
By subscribing to our newsletter you agree to the Privacy Policy and Terms of Use
Daily
Weekly