Before Christina Aguilera Releases Her Next Album, Relive Her Most Iconic Music Video Moments!

Christina Aguilera is bringing the heat with her upcoming album Liberation and we can't wait to hear the whole thing!

Ahead of her album release, the 37-year-old singer has released a few singles and it has inspired us to relive her best music video moments. Xtina's new jam "Accelerate" is definitely a club banger and her beautiful ballad "Twice" proves she can still hit those amazing notes.

While we wait for more singles, let's look back at all of Aguilera's life-chaning music videos. From her first hit "Genie in a Bottle" to the super sexy "Dirrty," Christina continuously entertains with her iconic videos.

Check out Aguilera's best music videos below. Don't forget to vote for your favorite Xtina video of all time in the poll as well.

Inside Christina Aguilera's Road to Reinvention

How can you not love this video? It marks the return of Aguilera and we can't get enough of it. The "Accelerate" video is provocative, full of Aguilera being her truest self and glitter lip moments. It's the perfect way for the artist to announce that she has another album up her sleeves.

Aguilera as a USO singer? Yes, please! This upbeat retro-feeling tune is just so fun. Plus, it shows off what Aguilera would look like as a blonde, brunette and redhead all in one video. Oh, and the military theme is one we can't help but love.

"Ain't No Other Man"

If there is one thing you can always expect from a Aguilera video it's a good story that you can sink your teeth into. In "Ain't No Other Man" the singer takes us to the flapper and speakeasy era and we want to live in this world forever, especially if Xtina is singing in it. PS: The costumes are fabulous in this 1920s themed video. 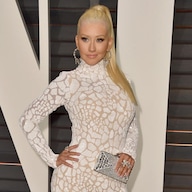 The former Mousekateer has had her fair share of emotional videos and songs over the years and this is definitely one of them. "Hurt" takes place at the circus and gives us one of the blonde beauty's best and saddest video moments. It tells the sad story of a father and daughter who had a deep connection and how everything got complicated and broke apart when she rose to circus fame. It's a brilliant story and when he dies it breaks Aguilera's heart and ours in the same moment.

"What a Girl Wants"

"What a Girl Wants" is classic ‘90s and we just love it so much. Think classic girl tries to impress boy while dancing video and you've perfectly described this video. It shows off Aguilera's dance moves and her vocal abilities and instantly takes us back to that decade.

This video really is a masterpiece. Not only does it show off Aguilera's vocal chops, but it features Pink, Lil' Kim and Maya. The burlesque ensembles, dramatic backdrops and sexy dance moves are almost too much sexy to handle in one video.

File this under one of Aguilera's most out-there videos. Although it has a creepy vibe to it "Fighter" is a fierce video. It shows off a darker side of the singer who has black hair, green eyeshadow and pins that she throws at her enemies. She comes out of the creepy black side to be surrounded by moths and it's a little strange, but the song's lyrics make up for the trippy side that rules this video.

Christina Aguilera Is Done With The Voice Forever

"Genie in a Bottle"

How can you not love this video? Sure, it's one of the artist's most simple videos but it's also her first video so we will always love it. "Genie in a Bottle" is the song that put Aguilera on the map and therefore its video will forever be in our top five. Plus, it has a great dance sequence and lots of beach scenes which screams '90s. Oh, and Josh Duhamel makes an appearance so that's a bonus.

As one of Aguilera's most iconic and moving songs we had high hopes for this video and it didn't disappoint. It's moving, heartbreaking and empowering all at once. "Beautiful" shows people judging themselves and how they look, getting torn down and depressed only to overcome and thrive. She made us all feel beautiful and the video gives us chills every time we see it.

Hello, this is the sexiest video that Aguilera has ever done—at least in our minds—and it's so great. It brought Xtina to live, gave use all the sass and sex appeal we could want and continues to make us want to strut our stuff. Plus, the boxing ring setting and that costume that Aguilera dons are so memorable that it has to be our favorite.

Now that you've re-watched all of Aguilera's best music videos vote for your favorite below. Then begin your official countdown to the singer's next album, which drops on June 15!