Talk about a great date night!

Ahead of all of the trophies being handed out at the 2020 Golden Globes, our favorite stars are hitting the red carpet, including some adorable A-list couples.

It's really the perfect occasion for Hollywood's finest to step out together. From the gorgeous gowns to tailored tuxedos, tonight's ceremony gives twosomes the chance to stun on the carpet.

We couldn't get enough of Lisa Bonet and Jason Momoa, when they rocked the step-and-repeat together.

Many of the red carpet couples are also talent powerhouses together. For example, Noah Baumbach and Greta Gerwig hit the carpet together, with the former up for a Golden Globes screenwriting award and the latter having directed Little Women, whose star Saorise Ronan could walk home with a trophy tonight. 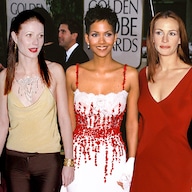 Check out the adorable duos below! 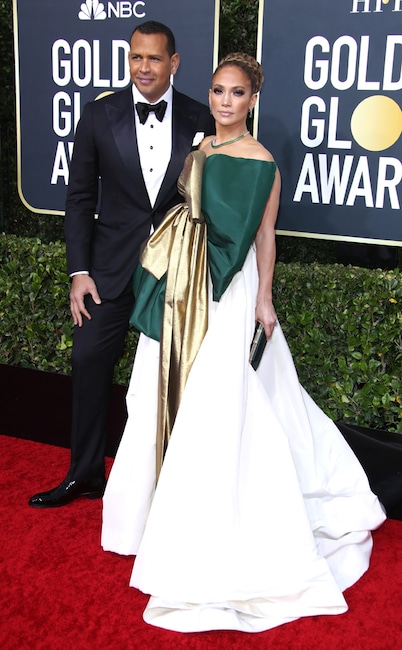 The Hustlers star brought high-fashion to the red carpet alongside Alex Rodriguez. 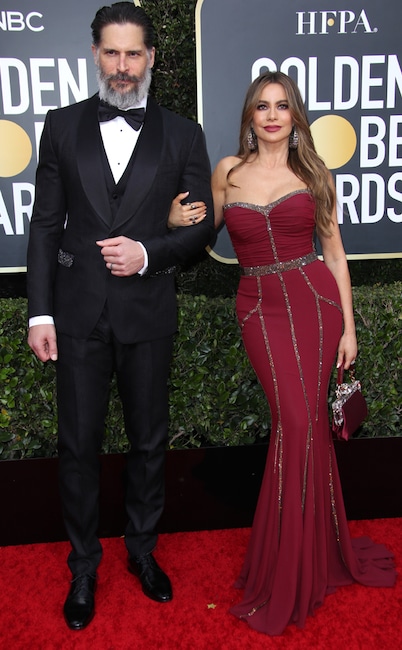 Easily one of Hollywood's hottest couples, Sofia Vergara and Joe Manganiello posed for the camera together. 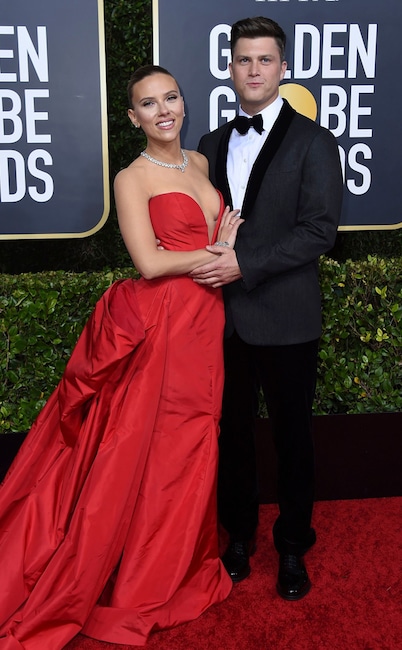 The Avengers star and Saturday Night Live performer stunned on the carpet together. 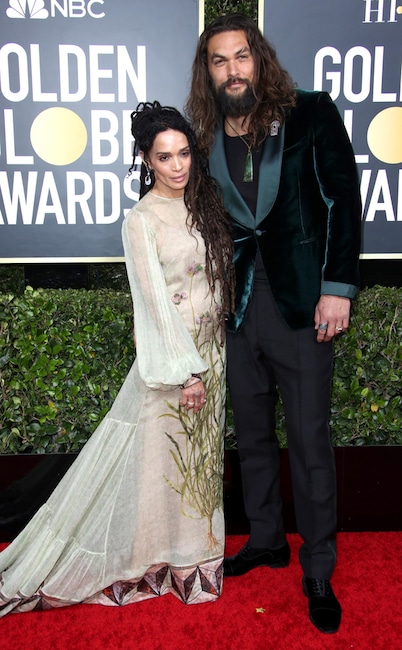 Could they be any cuter? One of our favorite Hollywood couples snapped a few pictures, with Jason Momoa rocking a gorgeous green suit. 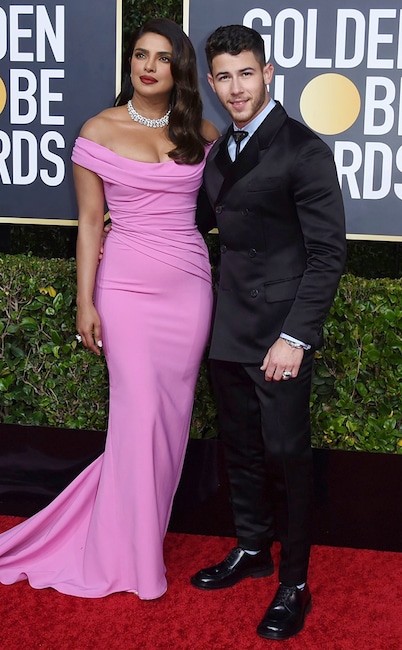 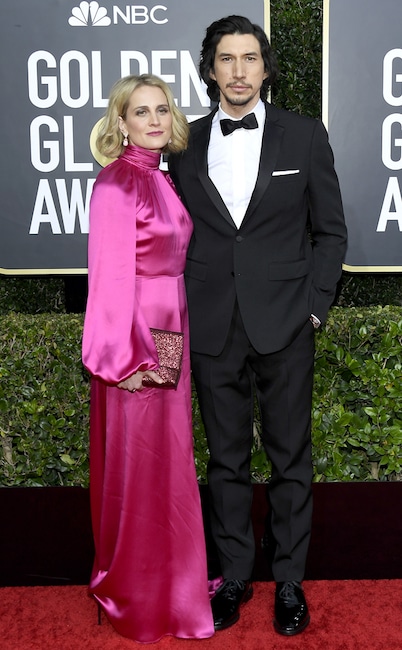 The Marriage Story actor looked dapper next to his wife Joanne Tucker before heading in to the Golden Globes ceremony. 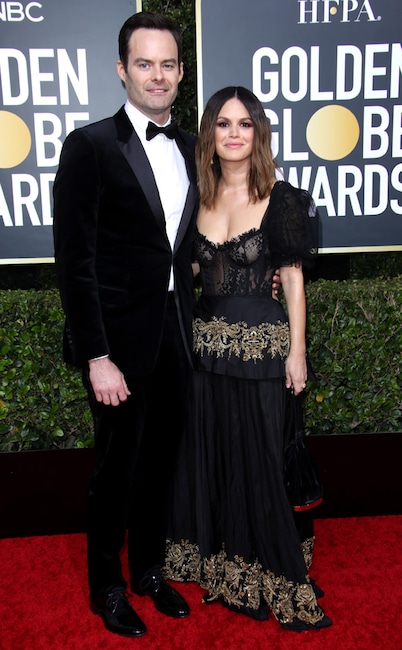 It's official! After speculation that the two were a couple, Bill Hader and Rachel Bilson confirmed those rumors by getting their picture taken at the red carpet. The two looked lovely in black together and this is our favorite new couple to obsess over! 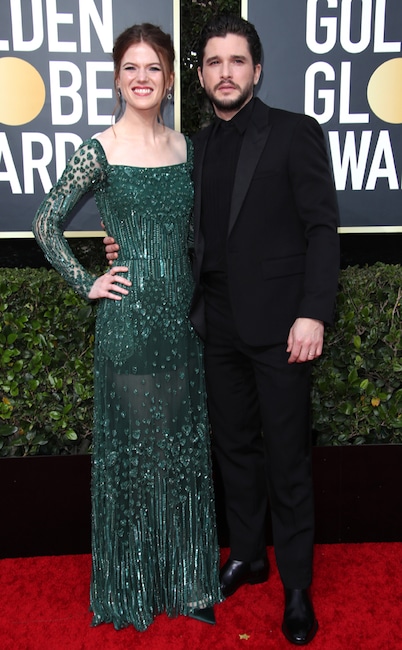 We were sure nostalgic for Game of Thrones when these two lovely stars stepped out together on the red carpet. Harington was up for a Golden Globes award for his final season on the acclaimed HBO series. 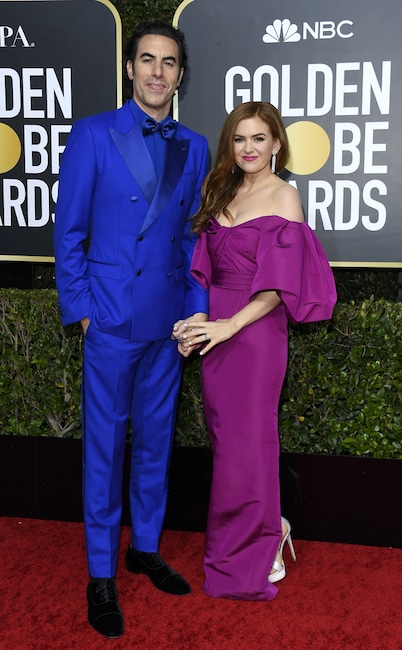 The comedic couple dazzled in front of the step-and-repeat in brightly-hued ensembles. 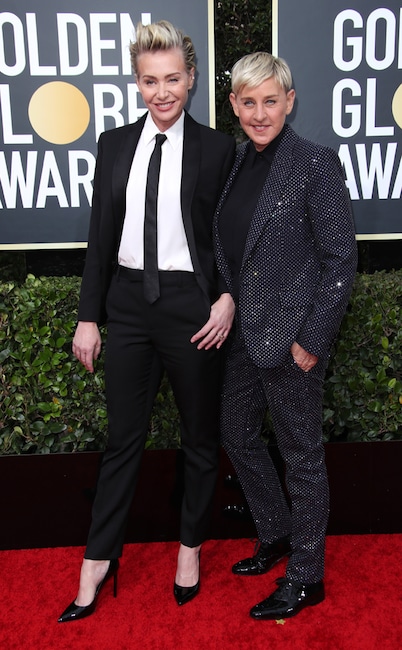 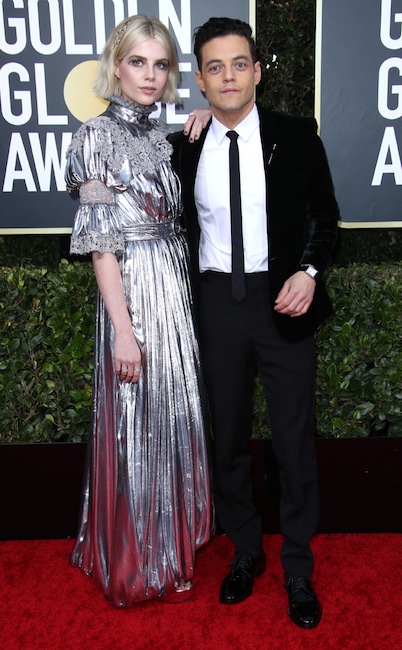 We loved seeing this young couple's love on display as they struck a pose. 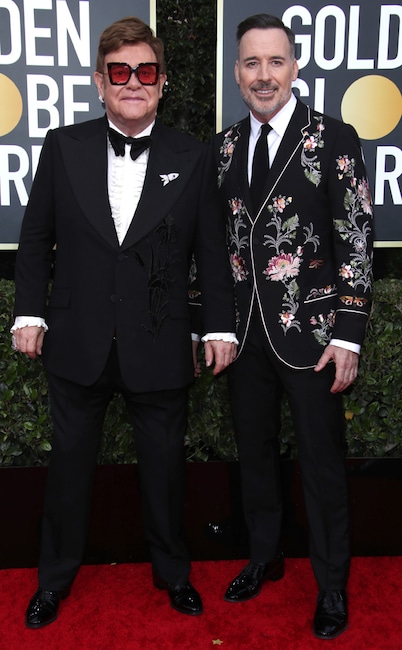 Before Elton John would go on to win a Golden Globe award for his original song in Rocketman, he would take a few pictures with husband David Furnish on the red carpet. 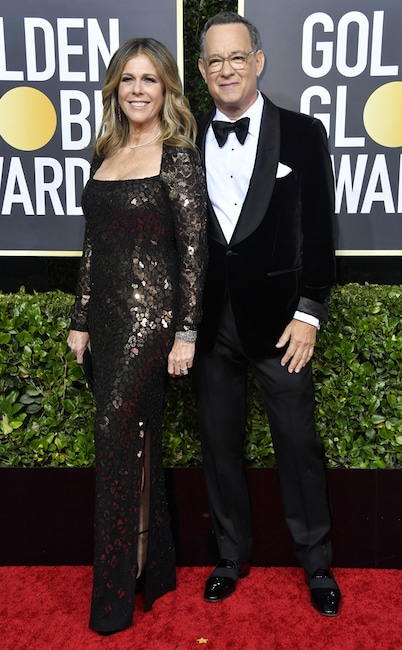 While Rita Wilson documented her hair and makeup team being late to help her get ready, the actress looked like royalty on the red carpet alongside her husband, Tom Hanks. 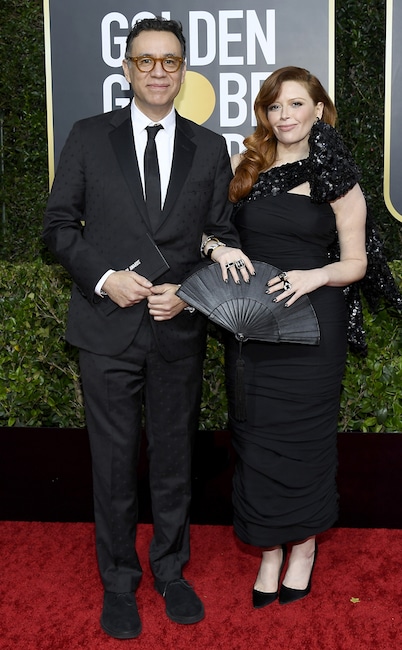 The Orange is the New Black actress and Saturday Night Live alum looked adorable as they arrived at the ceremony together. 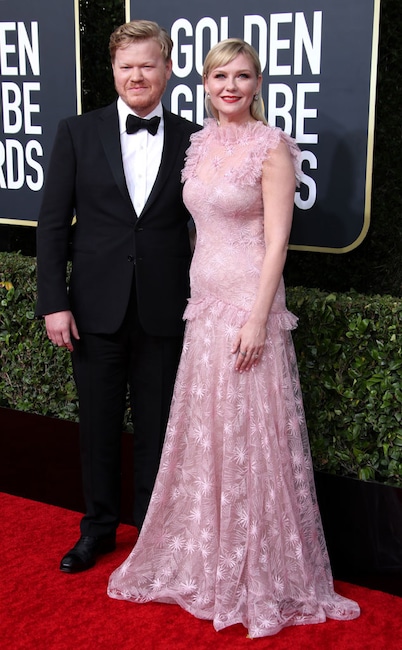 The El Camino actor showed his support for fianceé Kirsten Dunst at the Golden Globe Awards, where she was nominated for her work from On Becoming a God in Central Florida. 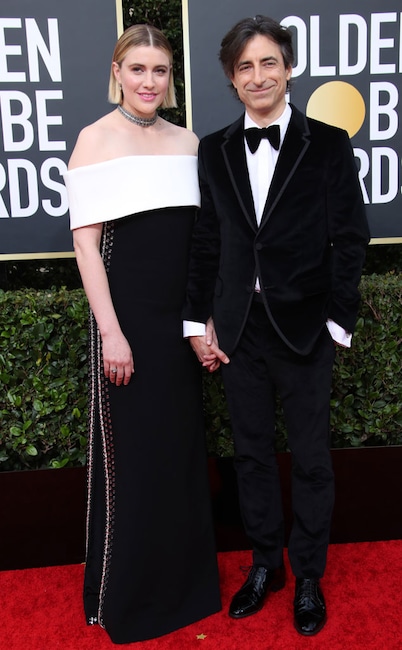 The talented couple color-coordinated in black-and-white ensembles on the red carpet. Director and writer Noah Baumbach is looking to bring home a Golden Globes trophy for Best Screenplay—Motion Picture for writing Marriage Story, which is also up for Best Motion Picture—Drama. 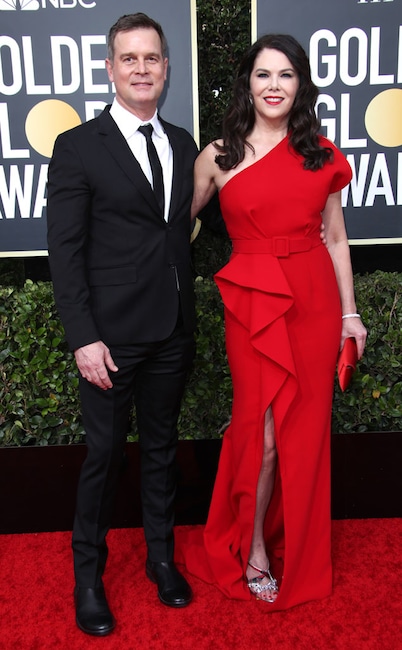 Calling all Parenthood fans! The two actors made us smile when we saw the darling couple arrive at the 2020 Golden Globes. 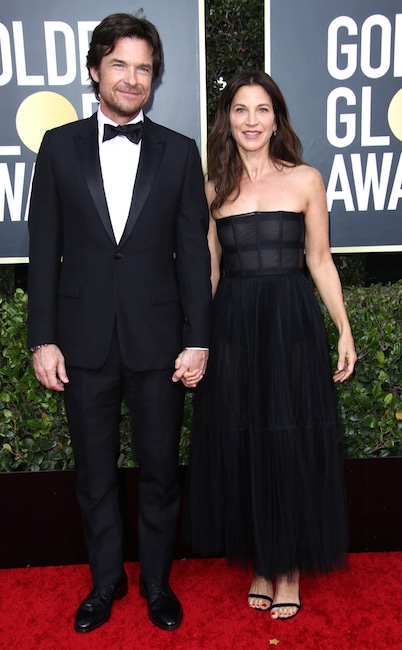 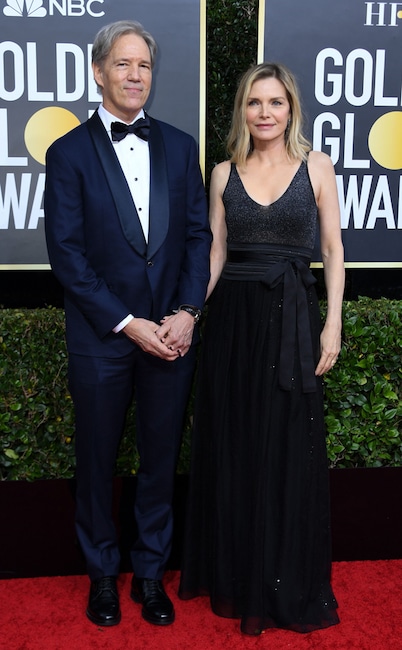 Michelle Pfeiffer and David E. Kelley took time to take a few photos ahead of the award ceremony. 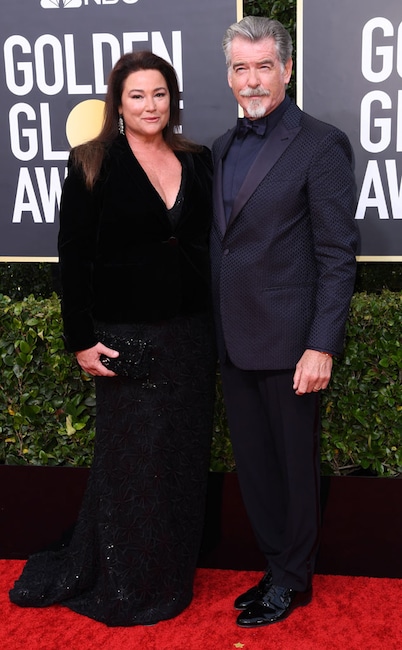 Pierce Brosnan and Keely Shaye looked regal as they hit the step-and-repeat. The proud parents are set to see their sons, Dylan and Paris, serve as tonight's Golden Globes ambassadors. 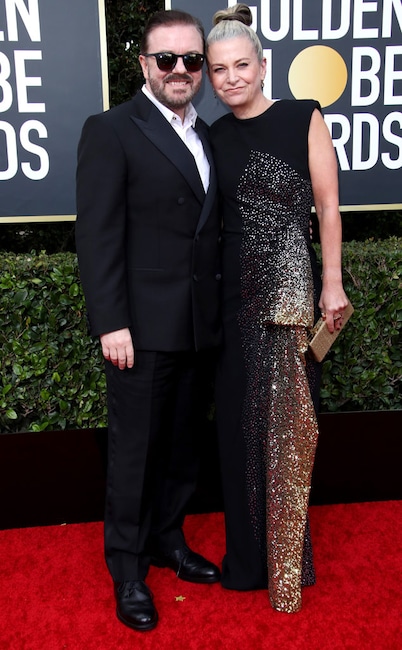 Golden Globes host Ricky Gervais stops for some pictures with his partner Jane Fallon, who looked stunning in a shimmering ombré ensemble. 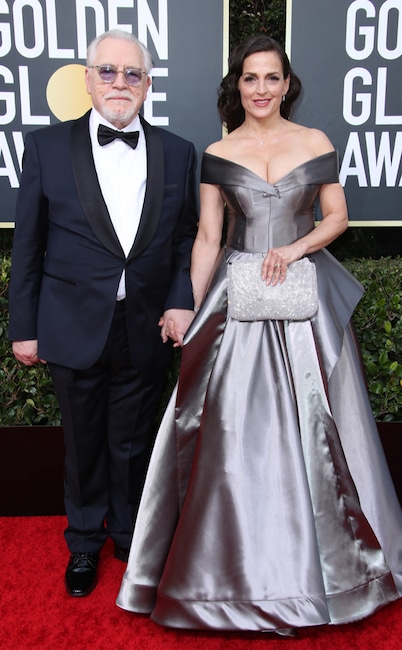