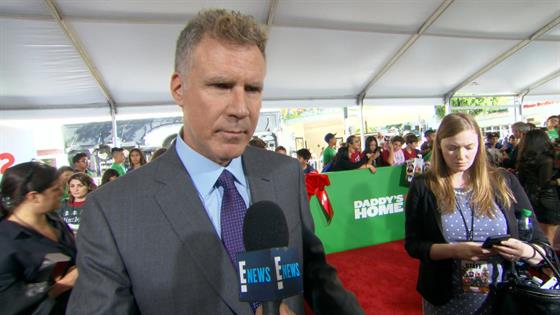 Now Playing
Up Next
Will Ferrell Forces His Kids to Watch "Elf" Over Holidays?!

UPDATE: Elf has won this round!

The year is almost over, but the holiday season is in full swing!

It's also time for another round of our Holiday Movie Tournament, where your votes will determine what is the Best Holiday Movie of all time!

You've already sounded off that Home Alone is the Best Classic Holiday Movie and that you and your loved ones gather up to watch How the Grinch Stole Christmas as the Best Family Holiday Movie, but there are two more categories to go.

This round is all about the movies that combine the spirit of the holidays with hilarity! The contenders for the Best Funny Holiday Movie include everything from animated films to raunchy comedies, all of which make us laugh out loud.

Does your go-to funny film star a comedy icon? If so, you may be partial to Elf with Will Ferrellor 8 Crazy Nights featuring Adam Sandler.

Perhaps the film that makes you laugh also brings you some old-school nostalgia, like the late '80s flick Scrooged or '90s classic Jingle All the Way. 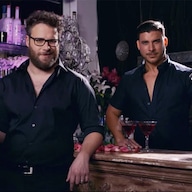 Then again, you may be more naughty than nice, and like edgier films such as Bad Santa or The Night Before that feature plenty of wild antics.

Or, you could still be missing the spooky season of Halloween, and like to turn on Krampus which brings some comedy-horror to what is supposed to be the most wonderful time of the year.

Maybe you've entirely checked out of the whole holiday season by now, and watching the couple in Christmas with the Kranks forgo their Christmas traditions has you nodding in agreement.

Really, all of the above are perfect for the holiday queue, but only one can walk away with the title.

Sound off below on which you think is the Best Funny Holiday Movie ever made. Then, be sure to check back on Thursday of what films will duke it out for the Best Romantic Holiday Film. 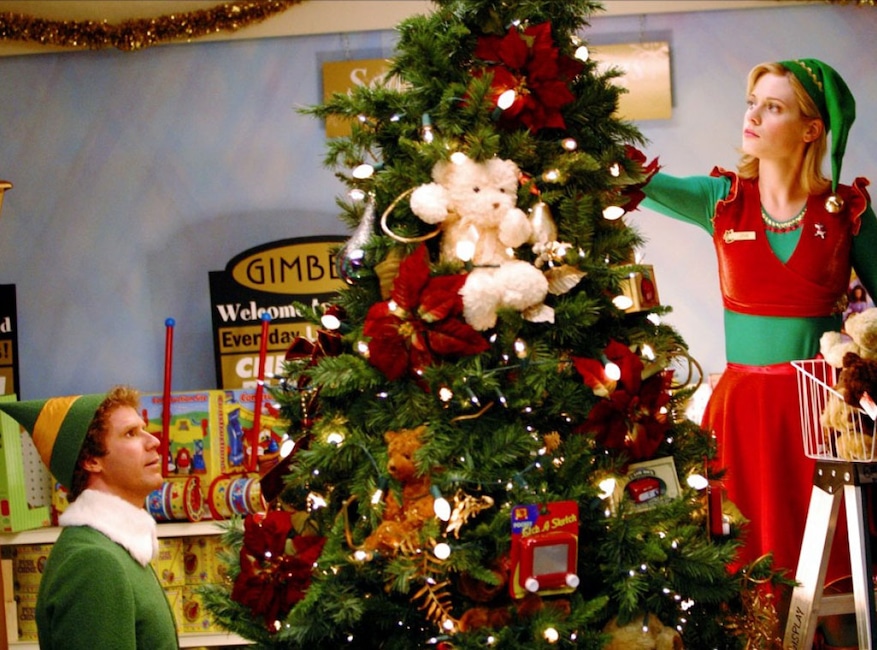 In Elf, Ferrell plays the lovable Buddy the Elf, who travels "through the seven levels of the Candy Cane forest" and "sea of swirly twirly gum drops" to New York City to meet his biological father, who has no Christmas spirit.

Over the course of the hilarious film, Buddy cheers up his family and co-worker Jovie (Zooey Deschanel) and gave us plenty of quotable lines between bites of his syrup-covered spaghetti, such as "Santa! I know him!" 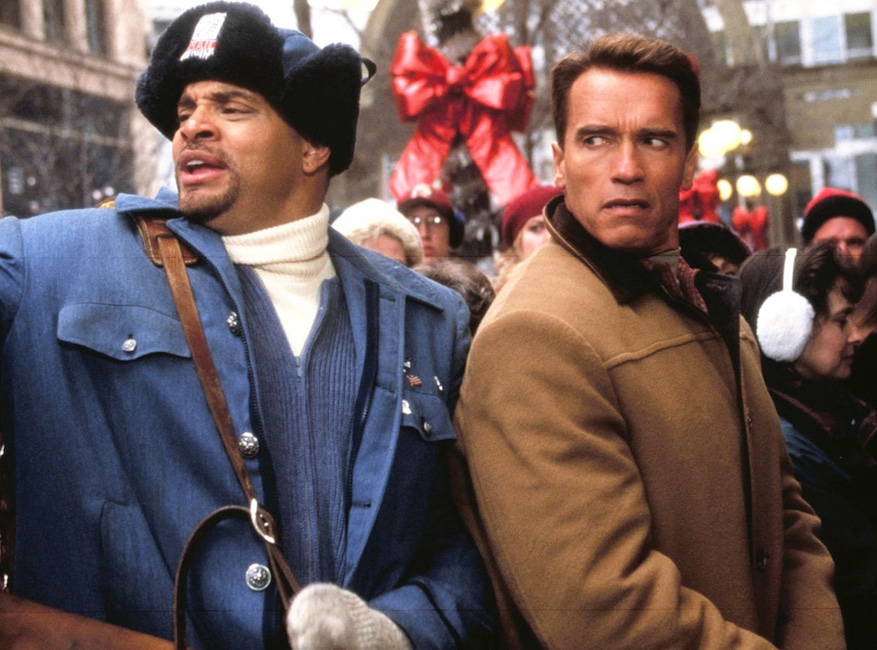 Jingle All the Way

Remember in 1996 when there was absolute madness around getting your hands on the Tickle Me Elmo toy?

That same consumerism chaos is found in Jingle All the Way, which came out the same year and stars Arnold Schwarzenegger as Howard Langston, a dad desperate to find any remaining Turbo-Man action figure for his son ahead of Christmas.

He's not the only one looking for the coveted toy, though! Myron Larabee, a postal worker played by Sinbad, is also looking for it, pitting the men against each other in an increasingly funny adventure to find the last remaining Turbo-Man in town. 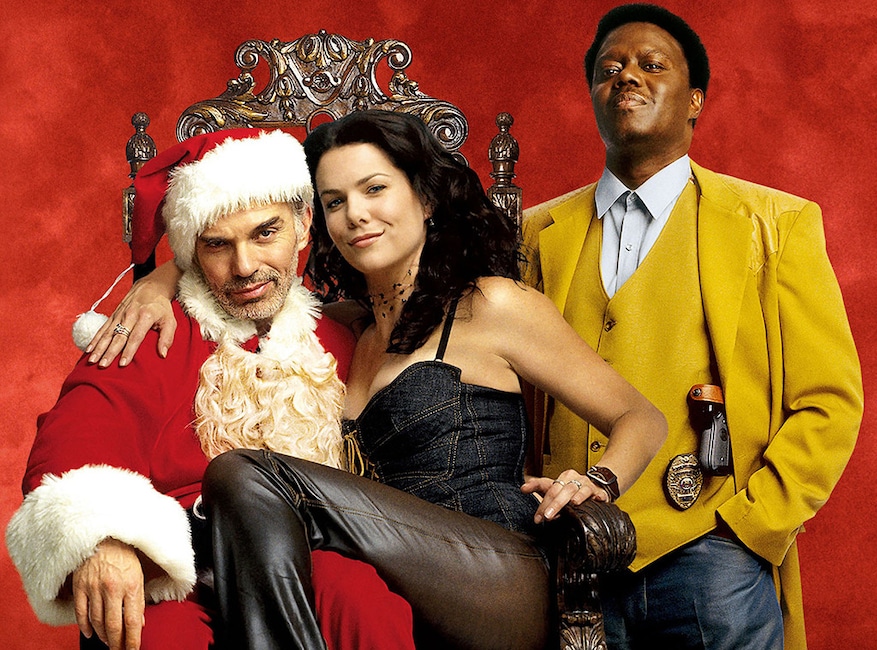 If the holidays have you feeling like a major grinch, then Bad Santa may be the perfect anti-holiday movie for you!

The film stars Billy Bob Thorton and Tony Cox as two men using their jobs as the mall's Santa Clause and elf as the perfect cover to pull off robberies on the shopping center. With plenty of drinking, cursing, smoking and Santa's sex addiction, this film is definitely for those who are on the naughty list. 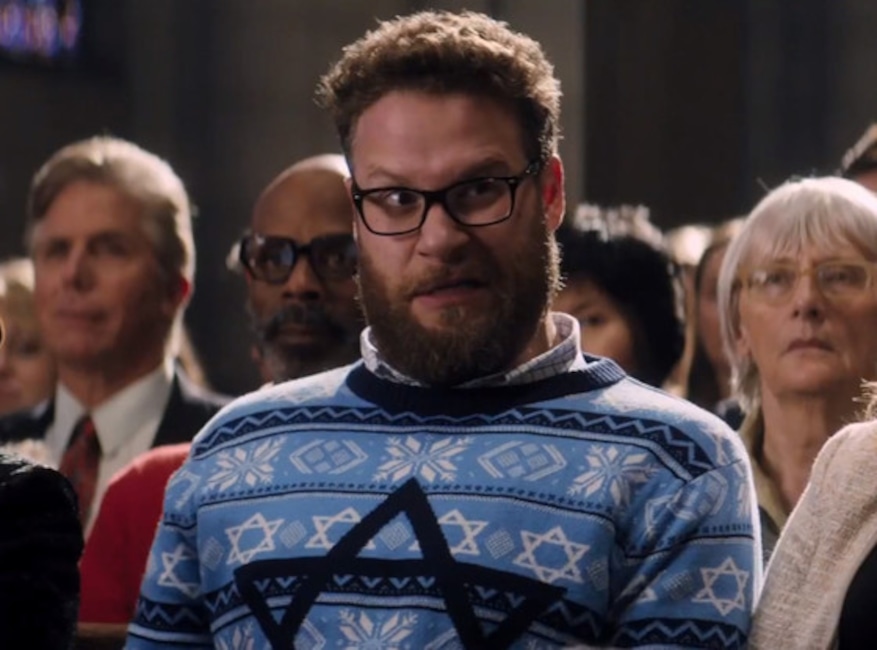 The holiday season is all about family and friendship, the latter of which is tested in this stoner comedy film.

The Night Before stars Seth Rogen, Joseph Gordon-Levitt and Anthony Mackie as a trio of friends who promised to spend every Christmas Eve together after Levitt's character lost his parents in a car accident.

15 years later, their lives are very different, so they set out for one last hurrah together that includes drugs, singing alongside Miley Cyrus and a whole bunch of antics that are sure to make you laugh. 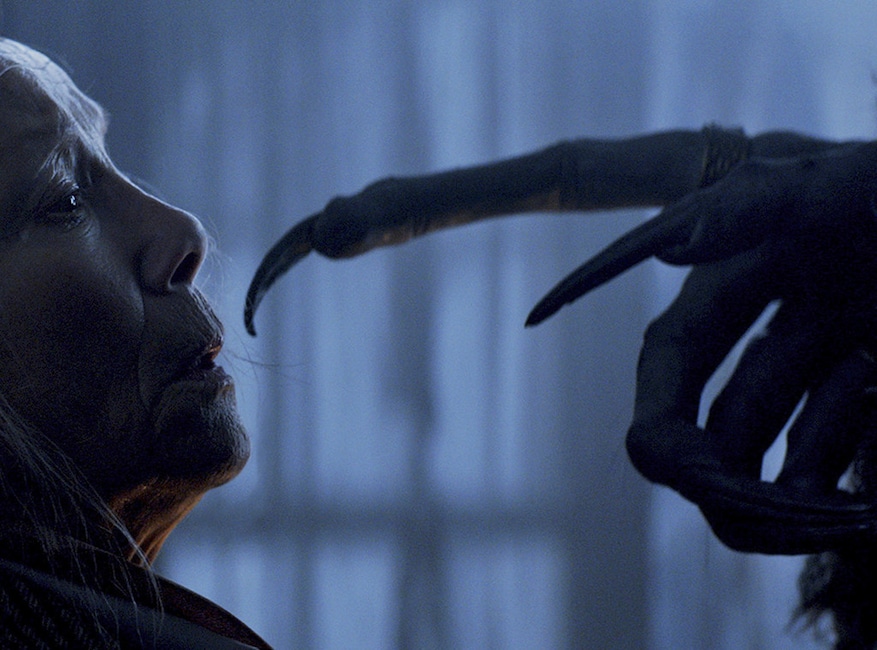 Many classic holiday films deal with a character who has lost some of their Christmas cheer. However, in the horror-comedy Krampus, giving up on the holiday comes at a terrifying price.

When young Max tears up his letter to Santa Clause and throws it into the wind, the transgression conjures up Krampus, a demon that punishes those who no longer believe in the magic of the season. The film stars Adam Scott, Toni Collette, David Koechner and more trying to, literally, survive the holidays.

You better watch out, you better not cry...Krampus is coming to town. 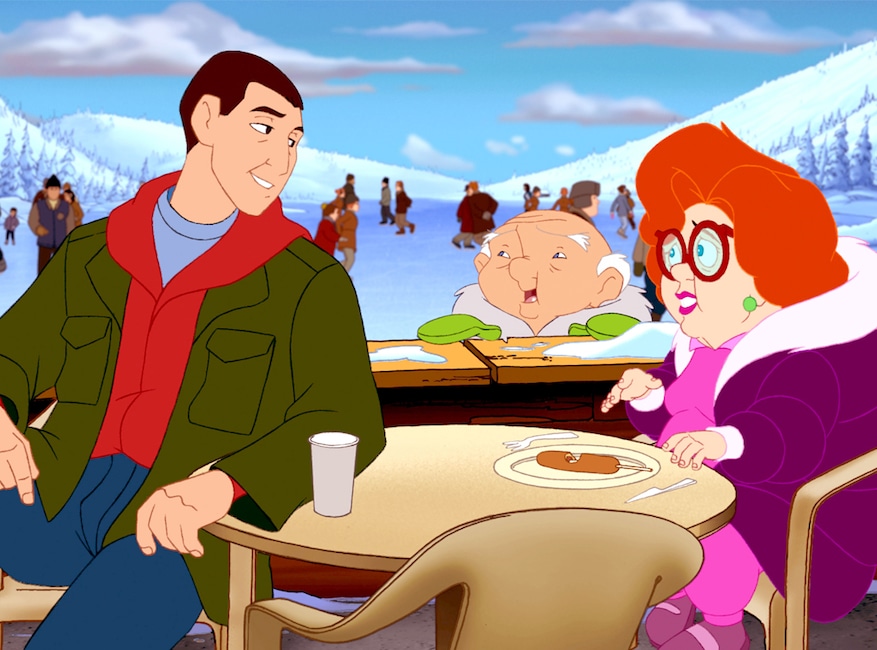 Comedy icon Adam Sandler co-wrote and stars in this animated feature film that is full of laughs and memorable songs!

Sandler plays Davey Stone, an alcoholic who has been moving through his life aimlessly after the tragic death of both of his parents years ago. After being busted for trying to dine-and-dash, Davey is ordered to serve as a referee for a basketball league under the town's local volunteer ref, Whitey Duvall.

Whitey tries to take Davey under his wing, and he initially rejects this, but as the film progresses, Davey realizes he needs to properly grieve his parent's passing and change his ways. After reading a Hanukkah card from his late parents, Davey runs back to make amends with Whitey, and gets the town to recognize all of the volunteer's selfless work. 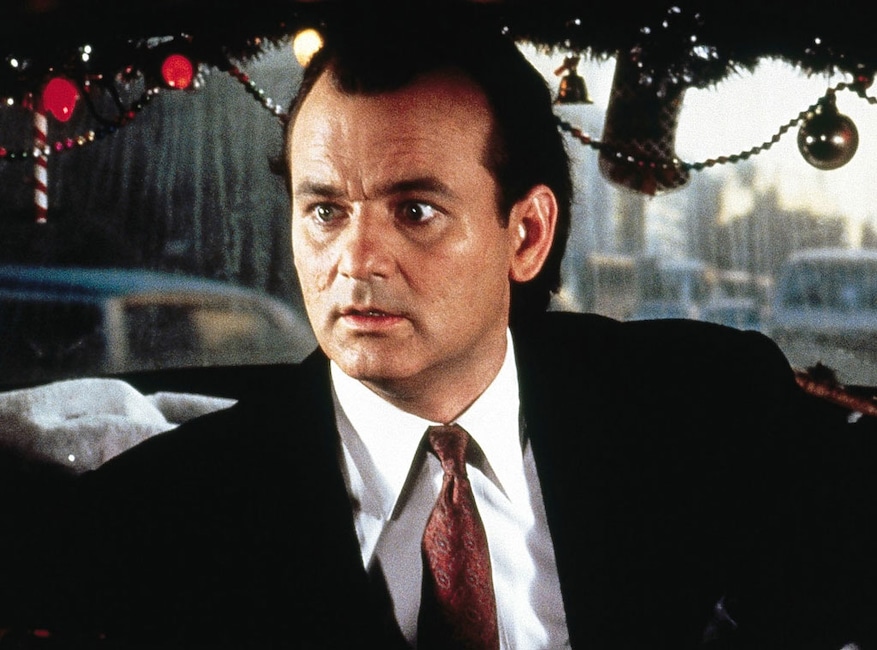 There have been plenty of adaptations of the 1843 novella A Christmas Carol, but the funniest iteration is Scrooged, which stars Bill Murray as Frank Cross, a modern-day Ebenezer Scrooge.

Just like the classic tale, Frank is a grump and ends up being visited by three ghosts that show him his past, present and dire future, should he choose not to change.

Frank changes, but all along the way there are plenty of chuckles with Frank's over-the-top personality that makes this a hilarious take on the classic tale. 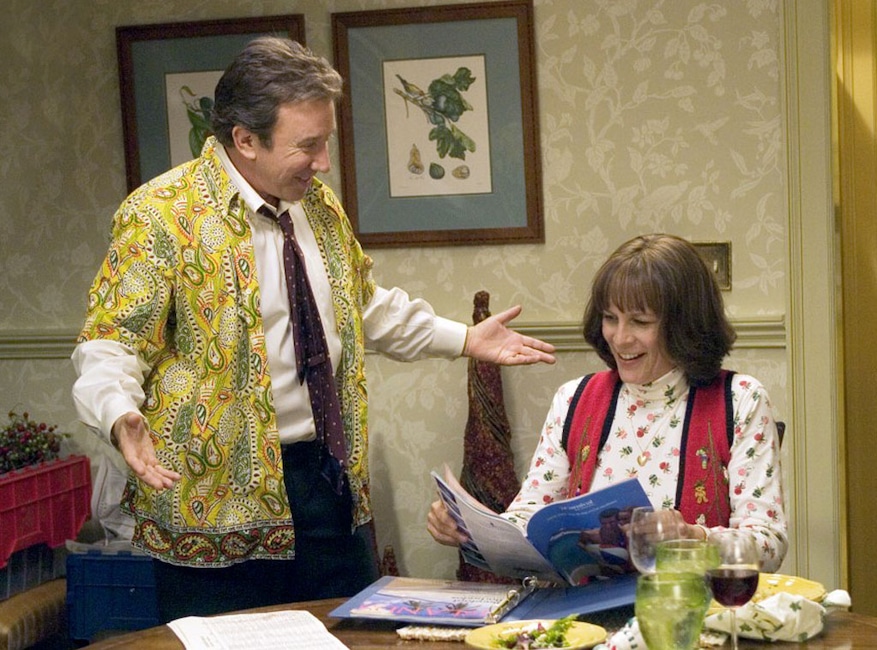 Christmas With the Kranks

While most of the time we love hanging the holiday lights, buying a tree and all of the traditions that come with preparing for the holidays, have you ever just wanted to skip them altogether?

That's what Luther and Nora Krank opt to do after their daughter goes off to college. The couple decides they want to trade in sitting by the fireplace to lounging on the beach, and book a tropical cruise in lieu of their neighborhood's Christmas activities.

However, their plans come crashing down when their daughter announces she is coming home for Christmas, and the two only have 12 hours to make their home festive for her return.