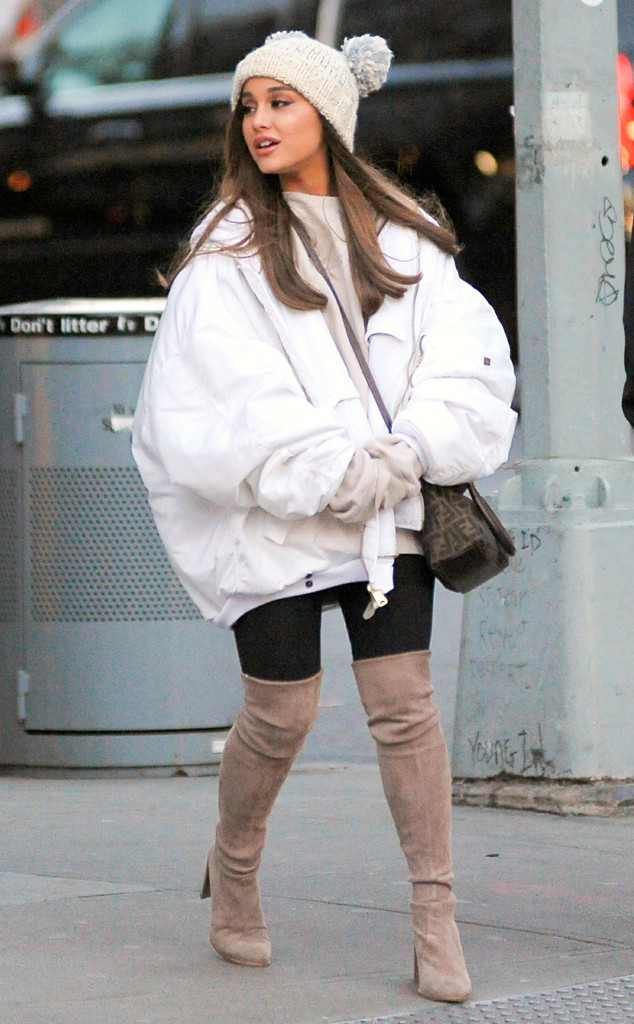 What's next after "Thank U, Next"? Another Ariana Grande single!

The singer has released her new song "Imagine," the second offering from her upcoming album Thank U, Next.

In it, she sings, "We could light up 'till I'm sleep on your chest / Love how my face fits so good in your neck / Boy, can you imagine a world like that? / Imagine a world..."

"Knew you were perfect after the first kiss / Took a deep breath like 'Oooh' / Feels like forever, baby, I never / Thought that it would be you / Tell me your secrets, all of the creep s--t / That's how I know it's true," the lyrics continue.

"A lot of this album mourns failed yet important, beautiful relationships in my life (as well as celebrates growth / exploring new independence)," Grande wrote on Instagram Stories. "But for those of you asking about 'Imagine': I would say if 'Thank U, Next' = acceptance... 'Imagine' = denial. Hope that makes sense."

The new track, she added on Twitter on Tuesday, is about pretending a relationship "never ended." She also said the song is "very, very special" to her. In November, she said "Imagine" was about "a simple, beautiful love that is now (and forever) unattainable."

"I think it'll balance the energy between 'Thank U, Next' and '7 Rings' nicely as those are super self assured / commanding and this one is more vulnerable / unsure," Grande tweeted on Wednesday, referring to another upcoming new track. "I wanted to mix up the energy a lil bit as both of those themes are equally prevalent on the album / in my life rn."

In the moments leading up to the release of "Imagine," Grande made light of Kanye West and Drake's ongoing Twitter feud to help promote her and Miley Cyrus' new tracks.

"Guys, I know there are grown men arguing online [right now] but Miley and i dropping our beautiful, new songs tonight so if y'all could please just behave for just like a few hours so the girls can shine that'd be so sick thank u," she tweeted.

Grande had revealed on Twitter on Thursday that her Thank U, Next album contains 13 tracks. The title song, which references her past relationships with the likes of the late Mac Miller and most recently, ex-fiancé Pete Davidson, dropped in early November. At the end of that month, she released a music video for it. The clip parodies four hit early '00s films—Mean Girls, Legally Blonde, Bring It On and 13 Going on 30.

Grande's Thank U, Next album, her fifth major record, is expected to be released next year.

"We're finalizing these mixes and arrangements now," Grande tweeted on Wednesday. "I'm very happy with all of it. Lots of strings so. You know me. My heart meltssss."