James Corden's mission, should he choose to accept it, is to skydive with Tom Cruise.

The actor appeared on CBS' The Late Late Show earlier this week with Angela Bassett to promote their new movie, Mission: Impossible — Fallout (in theaters today). After showing a clip from the summer blockbuster, in which the actor performed a HALO jump—hurling himself out of an airplane at 25,000 feet and opening his parachute "very low"—Cruise explained why he's committed to performing his own stunts. "I can't help it. I'm 100 percent when I do something," the famous daredevil said. "I want to give the audience the very best, so that's what I do."

Though Corden was impressed by other aspects of Cruise's stunt work, the host said he was uninspired by that particular stunt. "It's falling through the sky!" he said. "There are some amazing stunts...but I think we're all getting carried away with Tom Cruise, the action hero."

"It's a little more than that," Cruise said, smiling. "It took 106 jumps to get it, but if you're interested, I'm happy to take you—if you want to try it. If it's so easy, you can come with me."

Somewhat reluctantly, Corden agreed to take Cruise up on his offer. 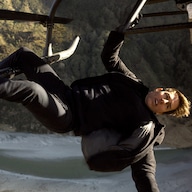 Cut to Thursday's episode, when Corden joined Cruise in Perris Valley, Calif. "It's 110 degrees and today I'm about to jump out of an airplane with Tom Cruise," he narrated. "I can't quite believe I'm doing this." He later admitted to Cruise he was "terrified" to free-fall for 15,000 feet.

"I was half expecting him to text me and tell me he was canceling," Cruise said. Corden told the camera, "I've actually been trying to get ahold of Tom for the last couple of days to cancel, but apparently I had his number saved wrong in my phone. I would also like to take the time to apologize to Tom Hiddleston for all the messages I sent him about my case of food poisoning."

"I'll be honest, I'm terrified," Corden told Cruise. "This feels like a mistake."

As Cruise guided him through the training, the host regained some confidence. "I'm thinking of this as an audition to be part of Team Cruise," Corden said. "I just want to know the door isn't closed and I've got a part in a big action movie." Happily, Cruise reassured him, "It's not closed." 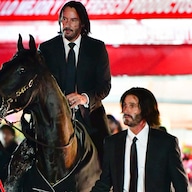 Stars and Their Stunt Doubles

Once they were seated inside the plane, Corden had a realization. "The worst problem is, in all of this, if we both die, I will get zero press. I will be a footnote," he predicted. "The story will be 'Tom Cruise Dies—Also, That Guy Who Occasionally Drives Around in a Car Is Also Dead.'"

Since he was a first-timer, Corden was connected to a tandem instructor—not that it put his mind at ease. Before they jumped out of the airplane, he shouted, "Oh, s--t! Oh, f--k! Oh, s--t!"

Cruise flashed his megawatt smile as he playfully circled Corden and the instructor, waiting a little bit longer to open his own parachute. Once the freefall ended, Corden was finally able to relax and take in the moment. "Oh, man!" he said to the instructor. "What a day! What a view!"

The actor landed gracefully on his feet, while Corden...did not.

Still, it didn't sour his experience. "That was amazing!" he told Cruise. "That was incredible!"