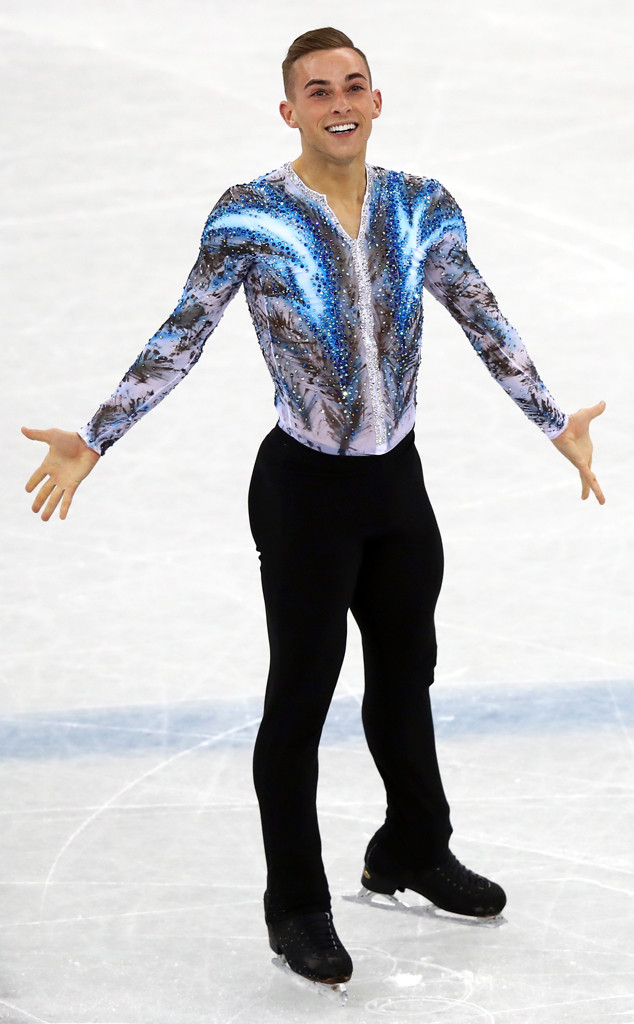 After making headlines off the ice for his big personality (including an tiff with Vice President Mike Pence), American figure skater Adam Rippon made sure to bring it where it counts—on the ice for his official Olympic debut in figure skating's team event on Sunday night.

NBC commenter Johnny Weir referred to the skate, that left fans in a tizzy, as "spellbinding."

The openly gay ice skater has made a lot of headlines for his outspoken ways and his social media presence ahead of the 2018 Olympic Games in Pyeongchang, South Korea. But the skater, dressed in a glittering ensemble, made sure to get away from the buzz around him while on the ice and bring the heat for the judges and the world to see.

Adam finished in third-place behind Mikhail Kolyada, the Olympic athlete from Russia.

@Adaripp is an artist on ice and a hysterical interviewee pic.twitter.com/C2UlHRIVL8

Many online were quick to praise Rippon for his artistic performance.

But it's his interviews after the competition and his social media comments before his skate that's also got him making fans.

"I’m so proud to be on this team," Rippon said on the NBC broadcast. "I went out there and I did my job.”

When asked how he feels when he hit the ice at the Olympics, Adam joked to NBC, "I want to throw up, I want to go over to the judges and say 'can I just have a Xanax and a quick drink?'"

The 28-year-old also said, "This might be my first Olympics, but it's not my first rodeo!"

I’ve been bleaching my teeth for the past few days and now the wind that I create from just talking makes them hurt. Like, I think this is a sign that I’m officially ready for my Olympic debut.

Adam has been giving his own flourish on the Games, since landing in South Korea.

On Saturday, he tweeted, "I've been bleaching my teeth for the past few days and now the wind that I create from just talking makes them hurt. Like, I think this is a sign that I'm officially ready for my Olympic debut."

Adam Rippon (@Adaripp) ranting for a minute straight on Instagram about the #Olympics condoms is honestly a MOOD™️. pic.twitter.com/y2JKlpLT3c

The same day, the Olympian also has some laughing when he posted a social media video about how "disappointing" the legendary condoms at the Olympic village were.

"I am not entirely sure what I was expecting. I thought maybe they'd have Olympic rings on them? I'm not like, upset—but I'm like—disappointed. But ya know? That's all right. Sometimes life isn't always what it seems."

Of course, it's possible that Vice President Pence wasn't laughing.

Earlier this week, reports had surfaced that the Olympic figure skater had turned down a meeting with him.

Tension began in January when Rippon, an openly gay Olympic athlete, was asked by USA Todayhow he felt about Pence leading the U.S. delegation to the 2018 Winter Olympics Opening Ceremony in Pyeongchang, South Korea on February 9.

And in response to Rippon's statement, Pence's press secretary told the publication, "The vice president is proud to lead the U.S. delegation to the Olympics and support America's incredible athletes. This accusation is totally false and has no basis in fact. Despite these misinformed claims, the vice president will be enthusiastically supporting all the U.S. athletes competing next month in Pyeongchang."

The outspoken skater told reporters after a practice session Thursday (via Reuters), "I don't want to distract from the competition or make this too much for my competitors and my teammates." He then added, "After the competition I‘m open to meeting him and having an open conversation, but opening ceremonies are tomorrow and I've been really focused."

During his talk with USA Today last month, Rippon said, "I'm not trying to pick a fight with the vice president of the United States." And he also stated then that he might consider meeting with Pence after the Olympics.

"If I had the chance to meet him [Pence] afterwards, after I'm finished competing, there might be a possibility to have an open conversation," he told the publication.

Amid reports that Adam had turned down a meeting with Pence, the vice president's chief of staff and communications director issued a statement, denying the claims.

TAGS/ Viral , Olympics , Top Stories
GET POP CULTURED!
*Email entered incorrectly. Please try again.
By subscribing to our newsletter you agree to the Privacy Policy and Terms of Use
Daily
Weekly