How Reese Witherspoon Reclaimed Her Power After Leaving an Abusive Relationship In the March issue of O, The Oprah Magazine (on newsstands Feb. 13), Oprah Winfrey interviews actresses Mindy Kaling and Reese Witherspoon, her co-stars in Ava DuVernay's adaptation of A Wrinkle in Time. The trio talk openly about how the #MeToo movement and Time's Up initiative have impacted Hollywood—and, by extension, women across all industries.

"What's the most difficult decision you've had to make to fulfill your destiny?" Winfrey asks.

"For me, probably leaving an abusive relationship," Witherspoon replies, adding that she endured both "psychological" and "verbal" abuse. "I drew a line in the sand, and it got crossed, and my brain just switched. I couldn't go any further. I was really young, and it was profound."

Without delving into the specific details, Witherspoon explains, "It changed who I was on a cellular level, the fact that I stood up for myself. It's part of the reason I can stand up and say, 'Yes, I'm ambitious.' Because someone tried to take that from me." It was a watershed moment for Witherspoon, who a few years ago was celebrated for saying, "Ambition is not a dirty word." 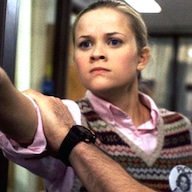 Looking back on her viral speech, Witherspoon says, "A Columbia University study found that people considered an ambitious woman more selfish and less worthy of being hired than an ambitious man. I thought, 'We need to start reframing this word ambition. Because it isn't about being selfish; it's about wanting to create more and do better for communities, schools, the world." Kaling, who ran her own show for six seasons, can certainly relate. "It's true. Ambitious, when applied to a woman, almost means ruthless. Used for a man, it's considered a great compliment," she says. "But if someone called me ambitious, it'd almost feel like shade."

In 2012, Witherspoon co-founded Pacific Standard, a production company devoted to backing female-led projects, such as Big Little Lies, Gone Girl and Wild. "We don't have compassion unless we see stories through other people's eyes, and we need a broader range of storytellers. They have to be women, people of color, LGBTQ. The storytelling has got to be more balanced," the actress says. "I truly believe that art is the antidote. When you see something from another perspective, stand in another person's shoes, that's what creates empathy, in my experience."

Witherspoon is also committed to making working environments safe for all women, especially after revealing last year that a director had assaulted her when she was 16 years old. "The understanding was that remaining silent was the condition of our employment. 'Do you want to work? Do you want to get ahead?' Then you don't talk. But the rules have changed. And with Time's Up, we're making sure they're changing for everyone—by providing legal and financial support to women in any workplace who have been harassed and are ready to speak up about it," she says. Until recently, speaking up was hard to do. "Whistle-blowers were not welcome," she recalls, "and if you wanted one of the very rare leading actress positions, you toed the line."

Now, Witherspoon believes "change" is inevitable. "There are a lot of really good men in the world, but I do think it's incumbent on women in leadership to rewrite the rules. We have to get together as groups of women, which is what I've been doing with a lot of actresses. It's been incredibly illuminating. Women in positions of power need to help people understand what the new normal is," she tells Winfrey. "You tell people how you want them to treat you."