We know you're ready for it, but don't expect to see Ms. Nasty's big Super Bowl comeback any time soon...

Janet Jackson made things crystal clear on Saturday when she put to rest any speculation that she would be joining Justin Timberlake on stage tomorrow at his 2018 Super Bowl Halftime Show performance to reprise their infamous "Nipplegate" incident from 2004.

It's been 14 years since in the former boybander ripped off part of Jackson's top, exposing one of her nipple-shield-adorned breasts to the almost 90 million viewers. The incident beget the phrase "wardrobe malfunction," drew half a million complaints and brought on Federal Communications Commission investigation. Needless to say, it was a pretty big mess.

While many have hoped the two would join together again at the 50-yard line this year, Ms. Nasty issued a statement to the world via her social media that shut down the rumors that have been circulating for months.

The music icon tweeted, "To put to rest any speculation or rumors as to whether I will be performing at the Super Bowl tomorrow; I will not. Thank you for your support and I do look forward to seeing you all very soon." 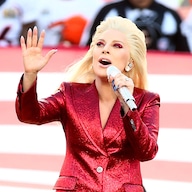 Even though it's been 14 years since the headline-making moment, it's anything but long-forgotten by some. The Parents Television Council released a letter earlier this week cautioning Timberlake.

"The fallout of your performance during Super Bowl XXXVIII has left an indelible mark. You really threw us—and millions of parents who were watching with their kids. The now-infamous wardrobe malfunction was the biggest news story for weeks, even at a time when the nation had launched into war in Iraq," said the statement.

"As we approach this Sunday's Super Bowl LII and its halftime show during which you'll be performing, we ask you to keep the halftime show friendly and safe for the children watching, and who may be hoping to emulate you one day."

"Thank you for considering our urgent appeal for a positive, uplifting and entertaining halftime show on Sunday. Because our Children are Watching," the group said to the now-father. "Break a leg."

Despite the concern (and possibly because of it) Timberlake has been hard at work all week, rehearsing non-stop in order to keep his routine on point, likely in hopes of coming back triumphant after the ensuing drama.

There's been speculation that Timberlake doing a tribute toPrince during the halftime show, given that the late singer was known for his famed 2007 halftime show and the game is being held at U.S. Bank Stadium in Mineapolis, MN., which is the "Purple Rain" artist's hometown.

Court battles were launched over the Timberlake-Jackson incident. In 2012, the U.S. Supreme Court ruled to throw out a federal agency's $550,000 indecency fine against CBS for airing the "wardrobe malfunction" during the 2004 Super Bowl.

CBS had forced Jackson to release a video apology over "Nipplegate."

"My decision to change the Super Bowl performance was made after the final rehearsal," she said. "MTV, CBS [and] the NFL had no knowledge of this whatsoever and unfortunately, the whole thing went wrong in the end. I am really sorry if I offended anyone. That was truly not my intention."

"Justin was supposed to pull away the rubber bustier to reveal a red lace bra," her rep said at the time. "The garment collapsed and her breast was accidentally revealed."

Timberlake has also talked about "Nipplegate". In an interview with Beats 1 host Zane Lowe, he discussed the aftermath that almost derailed his career. "I stumbled through it. To be quite honest, like, I had my wires crossed. "It's just something that you have to look back on and go like, 'OK, you can't change what's happened, but you can move forward and learn from it.'"

TAGS/ Super Bowl , Justin Timberlake , Janet Jackson
GET POP CULTURED!
*Email entered incorrectly. Please try again.
By subscribing to our newsletter you agree to the Privacy Policy and Terms of Use
Daily
Weekly