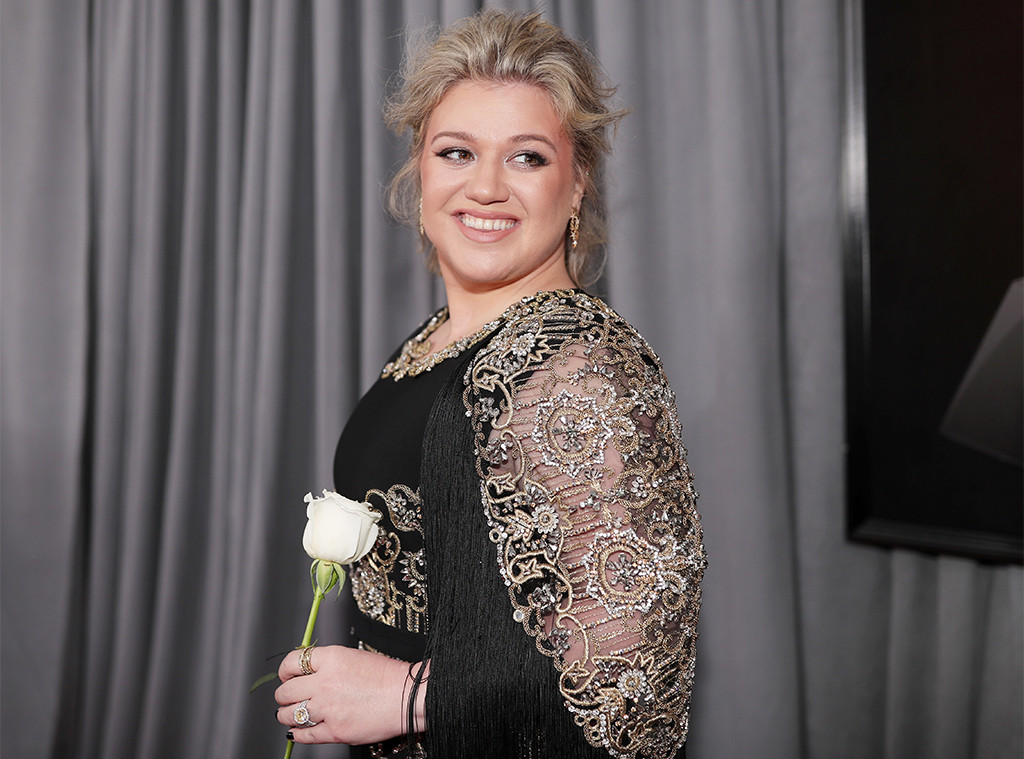 Kelly Clarkson delivered one of her newest anthems with "Whole Lotta Woman," an unforgettable tune off of her eighth studio album, Meaning of Life. As the first album to be released outside of her American Idol recording contract with RCA Records, which she once described as an "arranged marriage," the past AI champion and forever powerhouse found the footing to be entirely herself—strong, confident, badass.

Now, with her latest musical creation to promote and yet another Grammy nomination under her belt, the 35-year-old star is fully in the spotlight—and her style is reigning supreme. 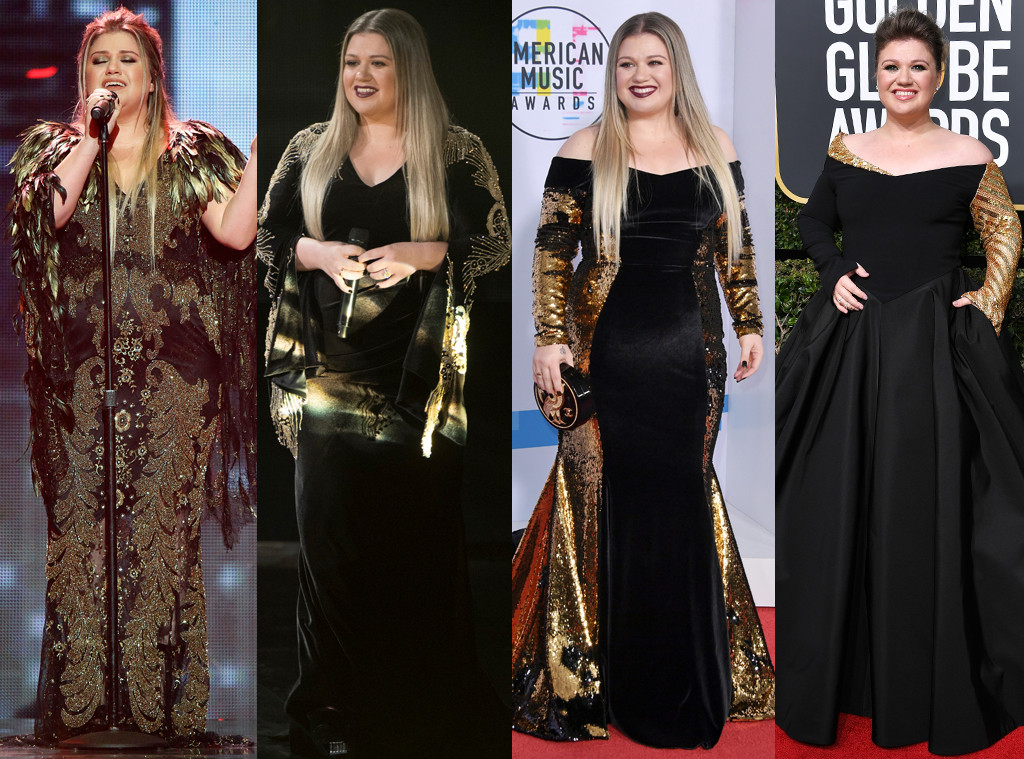 "This is the album she always wanted to make since she was a little girl—the writing, the singing—so she's been very involved in it and aesthetically, too," Clarkson's stylist, Candice Lambert McAndrews told E! News.

To complement the woman reflected in her melodies, Clarkson needed a wardrobe to match, so she turned to the divas of her past. The songstress and stylist exchanged mood boards of their creative visions and developed a black and gold aesthetic influenced by her powerful predecessors, among them Mariah Carey, Whitney Houston, Salt-N-Pepa and En Vogue.

As McAndrews explained, those '90s influences can be found in everything from her glamorous gowns and layered gold necklaces to her black and gold adidas. "Very diva, very soulful, very glamorous, but still having those rock-pop roots that she is from," she described.

"My personal opinion is now this is really her. This is who—when she looks back when she was 13 years old singing in her closet...this is what she envisioned of who she would be," McAndrews noted. "She's a mother. She's powerful. She's a mogul—all that stuff and I think she feels sexy and strong and independent..I think she really wanted to express all of that, but I think it does go down to her deeper roots of what she dreamt when she was a kid."

To help make Clarkson's sartorial vision come to fruition, McAndrews turned to revered designer for all, Christian Siriano, who they have planned to use throughout this entire album cycle. "The thing I like about him is he tailors to women and their needs. He can dress a size 22 person to a size 0," she said of the Project Runway alum, who has made a name for himself as one of the few designers to cater to all body types.

"I've always liked him because he is fearless in that fact... He's gonna make sure [the dress is] done right and it looks beautiful on every facet of [a woman's] body and I'm a fan of his...so when it came to working with Kelly, I had to call him."

The red carpet master is on the label of all of her recent award show ensembles, from the gold-sleeved black gown she donned to her first Golden Globe Awards earlier this month to the feathered creation she wore as she resurrected one of her earliest anthems, "Miss Independent," on the American Music Awards stage.

"She just nailed it vocally and she felt so good and just so happy and she was singing her new album and she looked beautiful and it was everything we had been working on kind of turned into one moment," the stylist recalled of that special performance. 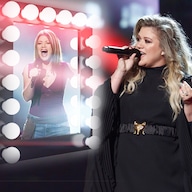 From American Idol to American Powerhouse: How Kelly Clarkson Soared While Other Past Winners Failed to Launch 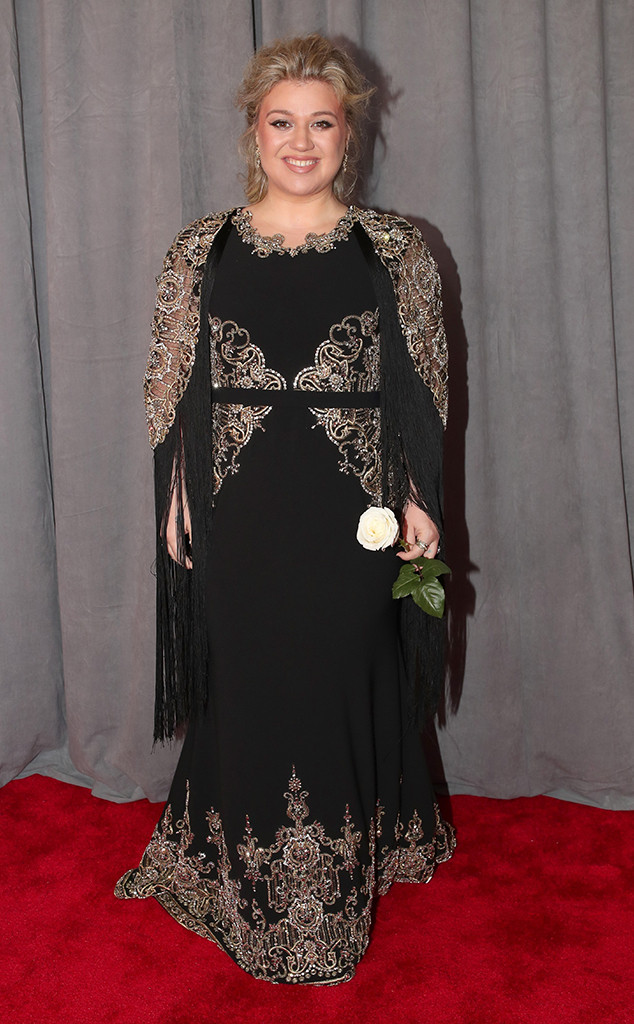 On Sunday night wearing Siriano yet again, Clarkson stepped out in a black gown adorned with metallic floral embroidered embellishment highlighting her neckline and waist with fringe on the sleeves. "It's definitely a moment," McAndrews told E! News.

"The thing about the Grammys is you can do whatever the hell you want, right?" the stylist said, citing Lady Gaga's journey down the 2011 red carpet in an egg. "For the Grammys, you should go for it."

While McAndrews has no qualms about defying fashion boundaries—if any even exist anymore—she does adhere to the age-old fashion precept that fit is key. As a result, there is a tailor at all of Clarkson's fittings and she does custom orders for the star.

If McAndrews is shopping for Clarkson off the rack, she sometimes faces a sizing conundrum. "If there's a size eight or 10 or 12, it's gone in two seconds because they fill the stores with zero to six and that's about it," she observed of the often limited range available in stores. "It frustrates me to no end."

As a figure-friendly alternative, the stylist will turn to the Internet, searching a mix of high and low brands—from Gucci and Vivienne Westwood to Zara and H&M—to find fitting looks for her client. She'll often size up and have the garment taken in for a custom fit.

Then, of course, there's the foundation of the look. "I'm a big believer in Spanx," McAndrews said, noting the brand's ability to solve a see-through garment, make clothes slide on easier and make the fit better.

The stylist makes fashion work for her clients down to their toes. "Sometimes I send with a publicist an extra pair of shoes to change into," she revealed. "If [the star is wearing] a really high heel and they're walking the red carpet and it needs to be photographed with that dress, but they're not going to want to be in that all night long and going to parties, I'll send another heel to change into." 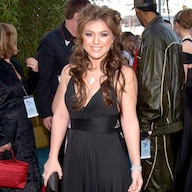 Plus, it doesn't hurt that the songstress has her own knack for pulling a look together. "She's also created a bunch of dresses from bottom to top for us with just ideas," she said of Clarkson, noting her resourceful tendency to revamp a garment she's already worn for an entirely new look. "Kelly's crafty. She's got that kind of mind."

"There's not a lot of fear there," McAndrews said of the star and her fashion choices. "As long as it fits her right and she feels good in it, she'll go for it."