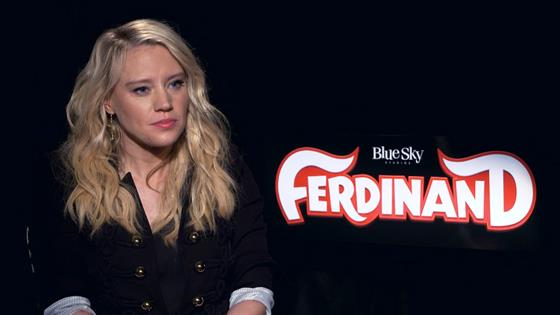 It was always going to be hard to top season 42.

Saturday Night Live hit a serious stride with its 2016-2017 season, both thanks to the insane news cycle (and the excitement of election season), an excellent line-up of hosts, and a fearlessness that resulted in some weird and incredible sketches.

This season hasn't quite lived up to the highs of yesteryear, but not because of a lack of great hosts. Ryan Gosling kicked things off with one of our new favorite shorts about a baffling font choice, and a bunch of first timers made it clear that they need to be added to the show's list of regulars.

This weekend, Kevin Hart closed things out for 2017 with some rather curious choices, but you'll just have to scroll on down to see where he lands in our ranking of all the episodes so far this season! 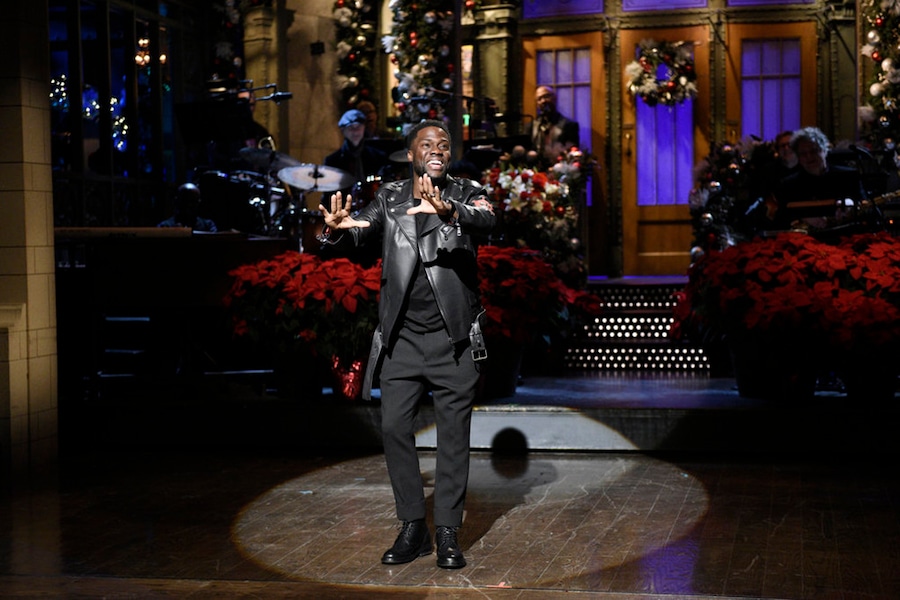 Kevin's monologue was about how women aren't fun, which makes it harder to be a dad, and the funniest live sketch of the night involved him pooping his pants. Soooo not exactly a success. 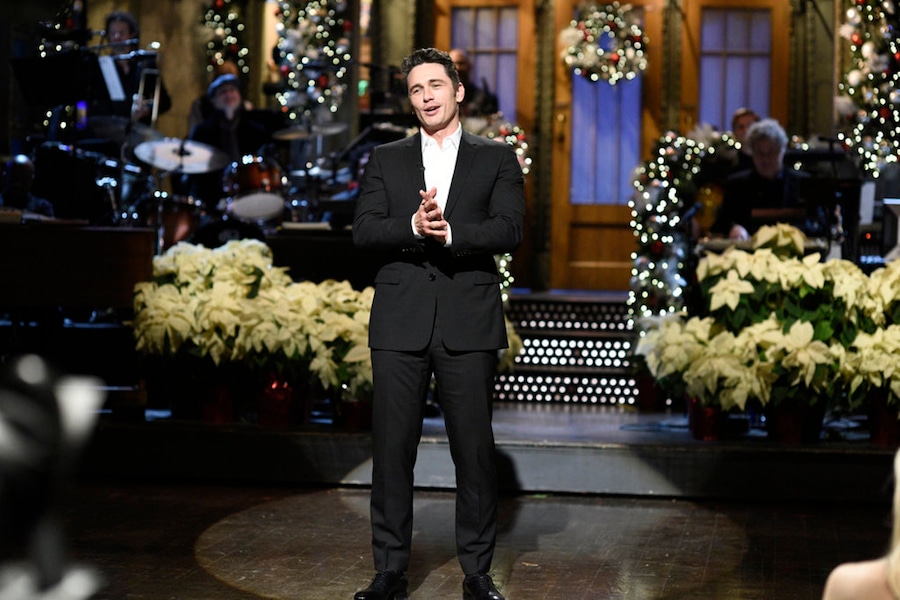 Way too many bits relied on the fact that James Franco was James Franco, and the monologue practically didn't even exist. Then there was that extremely tone deaf sexual harassment sketch that should never have seen the light of day...

High: Za (sorry, we laughed when he pulled out the chart), Michael Che as Gretchen the white woman, the concept behind the cold open with Santa

Low: The monologue, the execution of the cold open with Santa, the James Franco-ness of it all 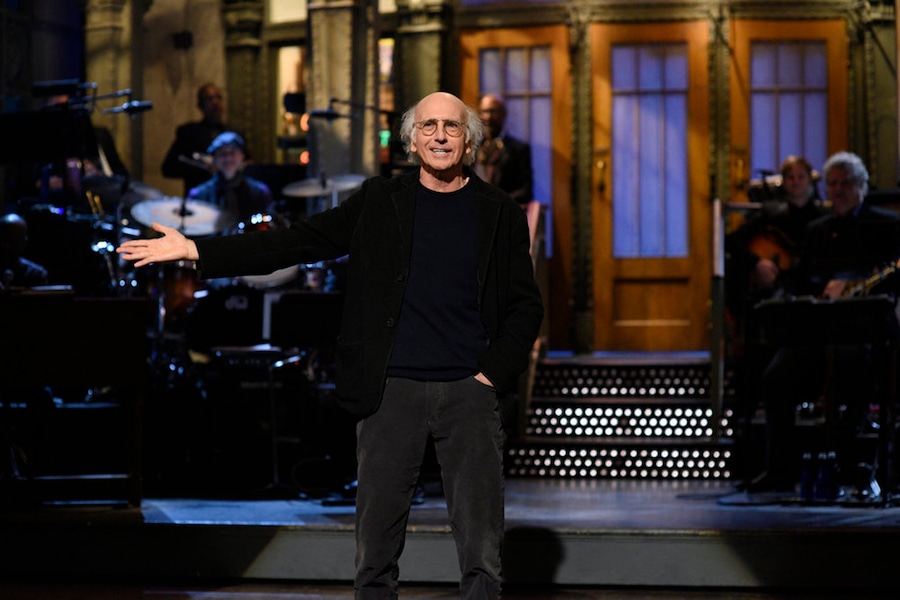 Larry David has shown up on SNL enough in the past couple years that this didn't feel like anything special. It wasn't bad, but it wasn't great either. (He also landed himself in a lot of headlines for his controversial holocaust joke.)

Low: The monologue, the afterschool special about beer(?) 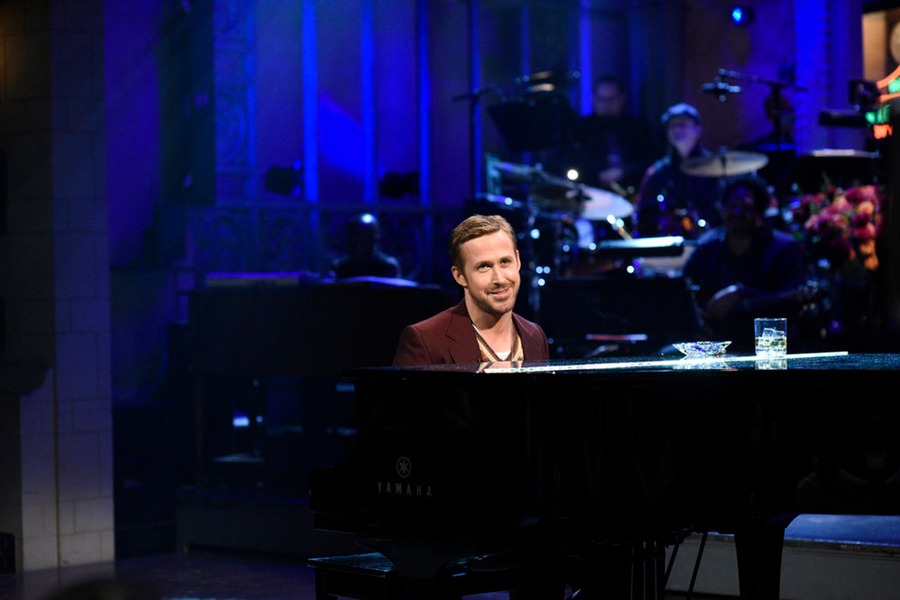 He saved jazz! It felt weird that all Ryan Gosling could think to do was remind us that we all made fun of him for saving jazz in La La Land like 8 months earlier, but he's always a solid SNL host.

Low: The chicken sketch even though it was also kind of amazing, whatever was happening in that dive bar with Ryan playing the flute 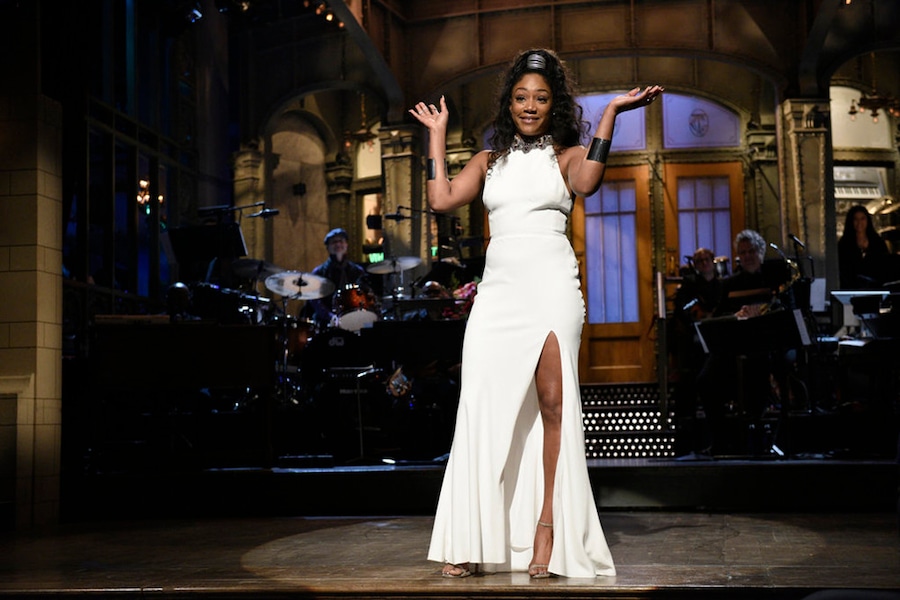 Once again, wonderful host (in a wonderful white dress), mediocre-to-bad material. Tiffany was game for whatever, even when that whatever was a short film about dolphin stimulation, and her monologue might just be described as iconic. 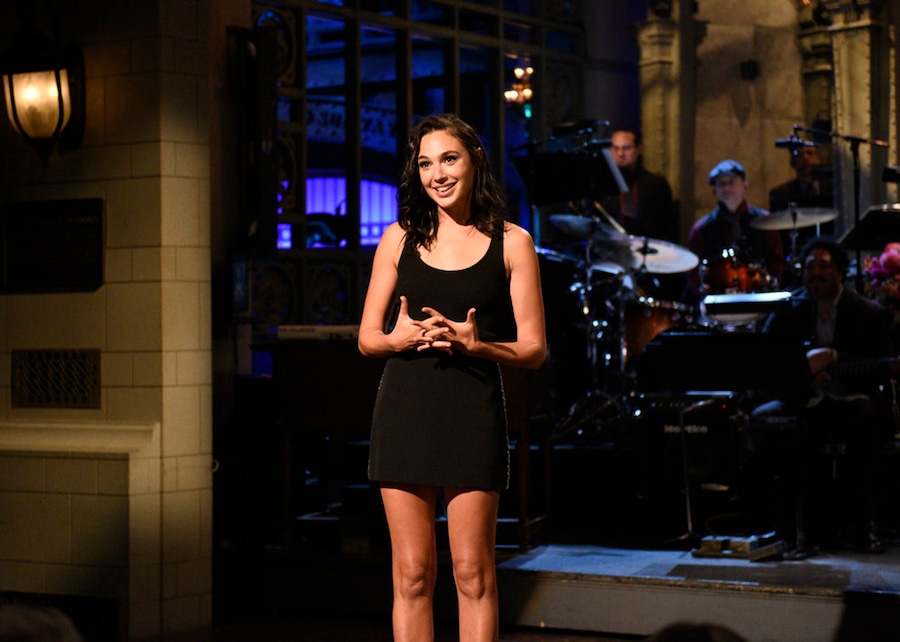 Gal Gadot is such a mesmerizing human that we feel like we watched this episode in a total daze. We remember her making out with Kate McKinnon, and there was some vague feeling that we at E! were supposed to feel embarrassed maybe? Whatever, we'd totally watch Kendall Jenner getting lost in her own house. And we'd watch Gal Gadot do pretty much anything.

Low: The Naomi Show, girls eating pickles on a webcam (though Gal needs to be cast as an evil accented Bond villain immediately) 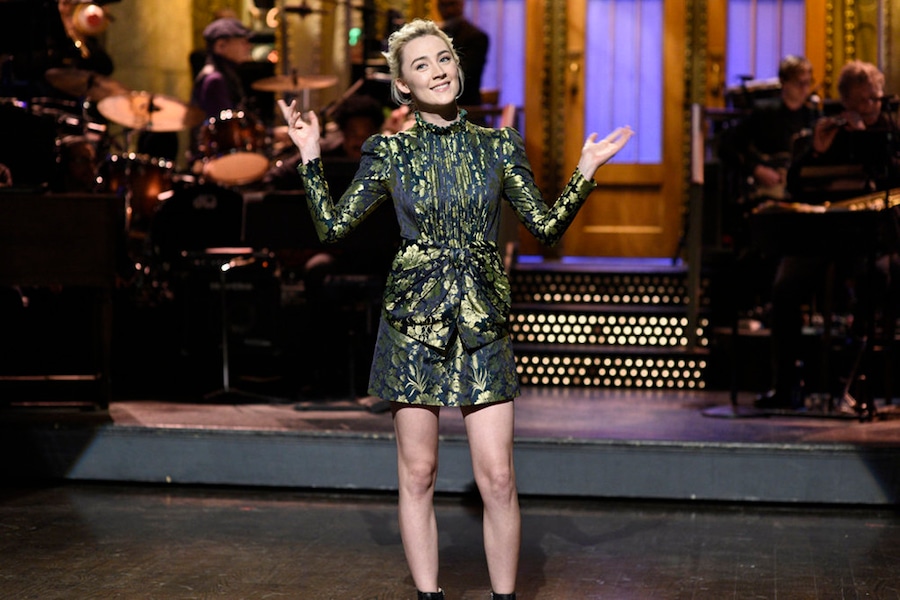 Weeks later, we're still trying to figure out how to repeat/write down the lyrics to Saoirse's catchy song about how to pronounce her name. At least we can now sing along to "Welcome to Hell," which is the true anthem for this second half of 2017. Basically, Saoirse proved that her acting/accent/singing skills translate to sketch comedy just as well as they do in indie movies.

Low: The man who likes dolls in the American Girl store, John McEnroe at the bachelor auction (completely unnecessary), "The Race" short (which we equally loved and hated)

What: That classroom sketch was not good, but we've been thinking about it ever since so we think it might be a work of art. 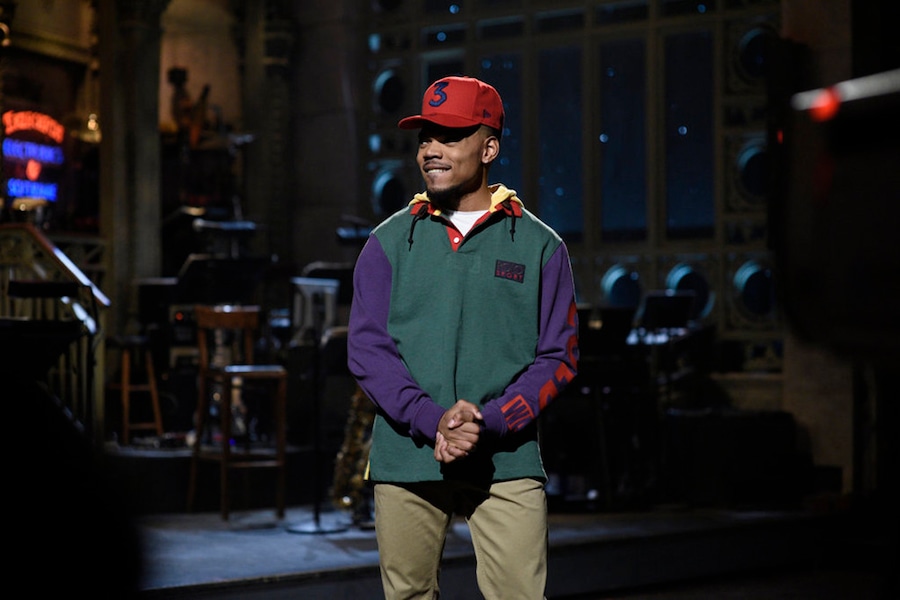 Like most of this season, the host was a delight, even when he had very little to work with. Chance was up for pretty much anything, which made even the worst sketches a lot better.

High: History of Rap, Come Back Barack, the sports announcer who didn't understand hockey, Chance taking his shirt off at the end of the career day sketch 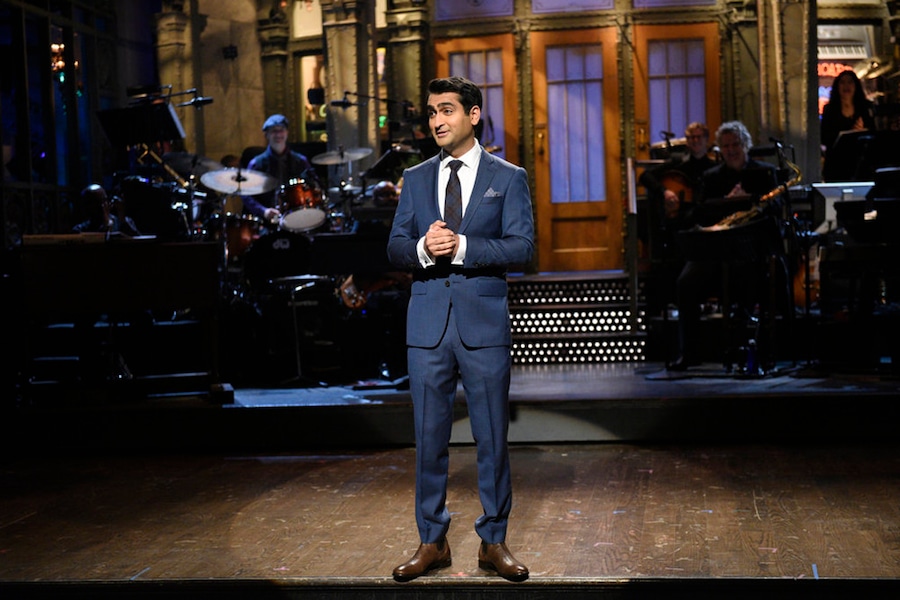 Kumail's influence was obvious throughout the entire episode, which resulted in almost nothing unlikable. Even if a sketch was bad on its own, Kumail made it good. Clearly he needs to become a regular host.

High: Everything involving Kumail, but especially that monologue.

Low: Everything Kumail wasn't in, like the Trump rally cold open.