How can you have a 16-year relationship in Hollywood and keep it under the radar? It's possible, just ask Enrique Iglesiasand Anna Kournikova—They're pros. They're so great, they even hid an entire pregnancy and birth of twins. Today, E! News confirms that the couple welcomed twins over the weekend, a boy and a girl.

The two met on the singer's "Escape" music video and quickly started dating. The former tennis star was 20 and Iglesias was 26 years old. Fast forward to present day, and the two live a seemingly quiet life on a private island in Miami Beach.

So does the recipe for a successful Hollywood relationship include few joint public appearances, no social media post about one another and lots of dogs? It might, well, at least this is what seems to work for Enrique and Anna.

For such a private couple that they are, it's ironic that their first moments together and even their first kiss was caught on camera by MTV's Making of the Video which was on the set of "Escape" where Anna played the singer's love interest.

"No, no, I've never met her before. But I'm a big fan," the star said eagerly. "Ya, I'm sure a lot of guys want to meet her, you know. I'm one of them. She's beautiful, talented, great tennis player. And I'm sure she's going to be great in the video."

The on-screen chemistry turned out to be just as real off camera. The two looked like high school kids as they giggled and flirted, Enrique would joke about the steamy scene they had to film.

"You know, it doesn't take a good actor to kiss Anna and try to make it believable," he said after they finished filming the music video's famous bathroom scene.

After meeting that day on set, the rest was history. 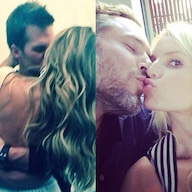 It all starts with their location, and the two have stayed away from Hollywood and opted for tropical Miami Beach where there are lots of beaches, and the paparazzi are few and far between, at least compared to Los Angeles. The couple, which has always called Miami home, built their dream house in a private waterfront community. The 20,000-square foot mansion on Sabal Palm Road includes a full-sized tennis court, an incredibly large pool, and a private dock, according to Daily Mail. Perfect for afternoon boat rides which seem to be one of the couple's favorite things to do.

We also realized that Enrique and Anna are just like us after, the "Duele El Corazón" singer described how he spends his downtime.

"A day off for me is being at home on the sofa, watching TV with my girlfriend and our two pets—just having a good time. Really just enjoying the day and relaxing and watching House of Cards," the singer said to Ventaneando earlier in November. 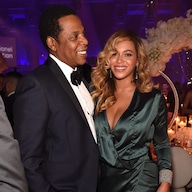 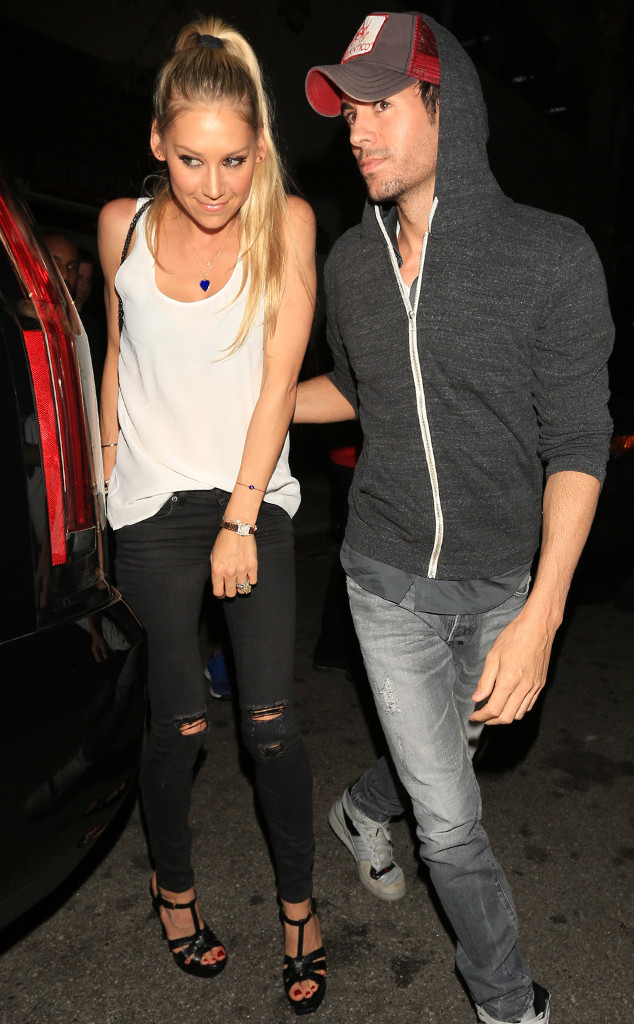 Although they might be able to avoid the media during their day-to-day life, they eventually will do interviews, and even then, these two are pros at not addressing their private life.

Take, for instance, Anna's 2010 visit to Loose Women where the ladies from the show spotted a large diamond ring on that finger.

"Are you engaged? That's a huge sparkler on your third finger on your left hand?" they asked Anna.

"Well, we've been together for over eight years," Anna said nervously. "So you have to have that trust with each other. You know, it's not easy being together for so long, but I kind of understand him a lot because he's the male version of me and I'm kind of the female version of him."

As life would have it, the following year Enrique visited the same show, and they asked him about the possible engagement.

He just answered, "Nope. Everything is good, under control."

And because there is very little to know about their relationship, the questions continued to come up through the years. Sometimes, Enrique would purposely mislead the public and say that they weren't together, he admitted to playing the press in an interview in 2012. So he will either joke around with about question or he'll just flat out avoid the questions about his relationship with Anna.

Like last year, after iHeartRadio Fiesta Latina, Telemundo's Un Nuevo Día caught up with the singer as he was walking off the stage. The morning show's Carlos Montoya immediately asked what was on everyone's mind.

"Look, your girlfriend comes in before you and leaves before you, is that a strategy to outsmart your enemy?" the reporter asked jokingly.

"No, she's much more discrete than I am," Enrique said laughing.

"Enrique, did you get married?" Montoya bluntly asks.

That back and forth went back several times until Montoya picked up on Enrique's comedic way to avoid having to answer the question. Eventually, they both laughed, and Enrique went off camera to say hello to someone, but the lingering question remained unanswered. 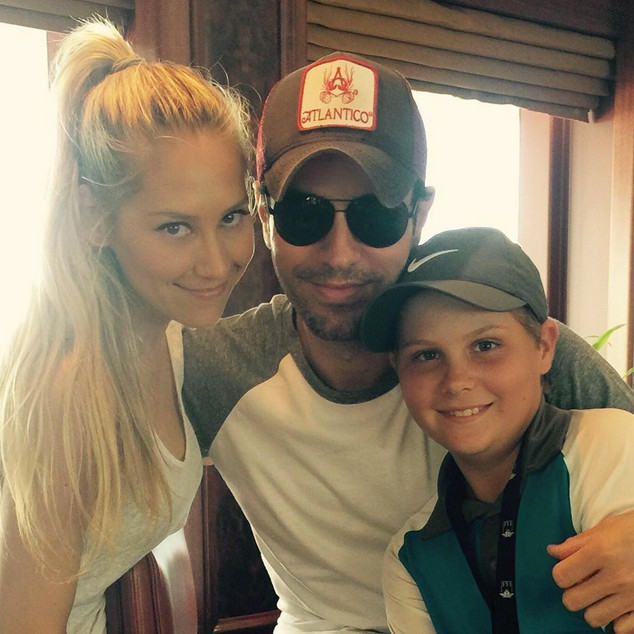 If Enrique and Anna are engaged or married remains unknown, but a few years ago in 2014, the singer told Access Hollywood that being husband and wife wouldn't change much for him.

"Well the marriage bug to me, I don't think it would make me any happier. I'm not against it by any means. Yes, kids at some point, I would," Enrique explained. "Hopefully the day that I have kids I can lay back a bit and not travel as much and not be touring as constantly. I don't want to be on the road for six or eight months and then come back and not recognize my own child." 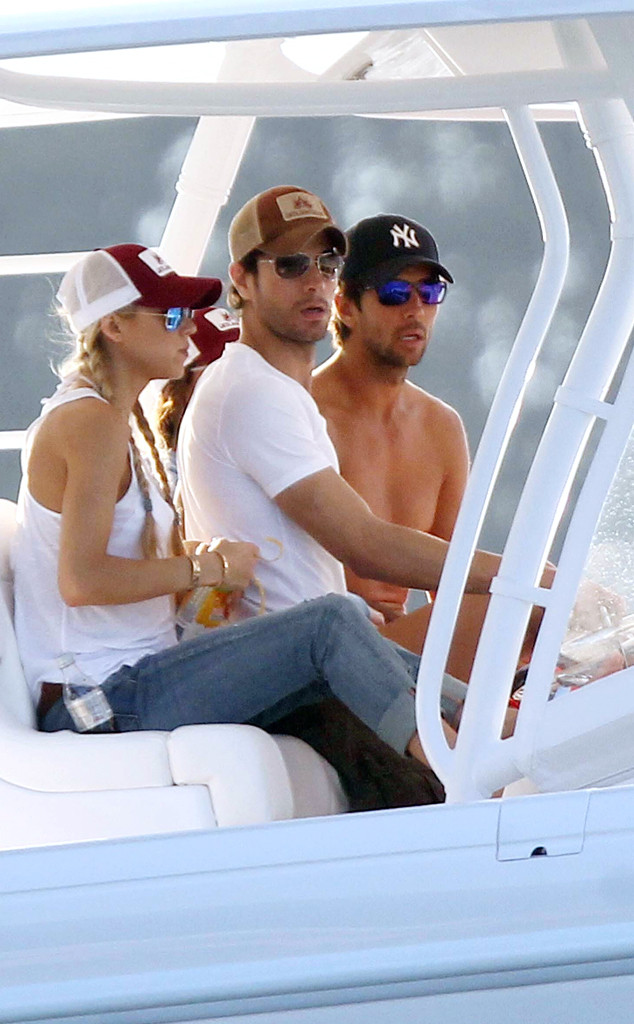 Fast forward to last month, and the press asked the singer the same question about whether or not he had any plans on being a father.

While babies might happen in the near future for this couple, it's clear that they value their privacy and that aspect will most likely be even more private. For that reason, they surround themselves with friends and family that are just as reserved.

One of Enrique's best friend's is Pitbull. That's right another superstar, whose private life we even know less about than the Spanish-American singer. The two have toured for over seven years together, and they seem to make it work.

"We live in the same city. We hang out every once in a while, too.," Enrique explained to Access Hollywood. "Pit's low-key, he's easy going, and we're good friends."

Also worth noting, in 2014, after the couple had already been dating for over a decade, Enrique's father Julio Iglesias admitted to never having met his son's girlfriend.

"My kids are very independent, and it is difficult to see Enrique because he is all over the world," the 70-year-old living legend tells the U.K.'s The Mirror. "But Anna is very beautiful—they have good taste, my kids."

Unlike many other Hollywood couples, you won't find Anna in Enrique's Instagram account or vice-versa. As the star explains, he continually tries to find a balance between sharing with fans and keeping certain things private.

"I think it comes with the territory. I understand when people ask me, 'Hey, are you married? Do you have a girlfriend? Do you want kids? Do you have kids that we don't know about?'" the singer said to E! News in 2014. "For me, I do try to keep my personal life private because I need that balance. When I go back home, and I'm home, I want to make sure that whatever happens in my house is just for me and my loved ones that are with me right there, I need that."

Enrique and Anna know what it takes to make it work because let's be honest, a 16-year relationship in the spotlight is indeed praiseworthy.