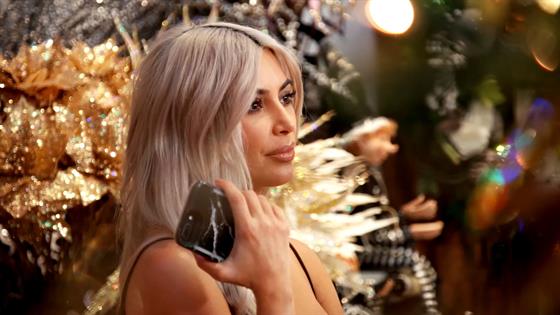 Keeping Up With the Kardashians fans are waiting in anticipation for the annual family holiday card and on Friday, she began teasing it on social media like a Christmas advent calendar, posting images from it daily. There are 25 pieces of her puzzle.

Day 1: Kim shared a photo of son Saint West, who will turn 2 this week, sitting among a pile of more than 15 brown paper-wrapped presents. He is wearing just a pair of jeans.

Day 2: Kim posted a pic of daughter North West, 4, looking up at her mom while standing next to one of her sisters. They are wearing white tank tops and jeans.

Day 3: Kim posted a photo of Kourtney Kardashian's youngest of her and Scott Disick's three children, son Reign Disick, 2. Like Saint, he is also shirtless. 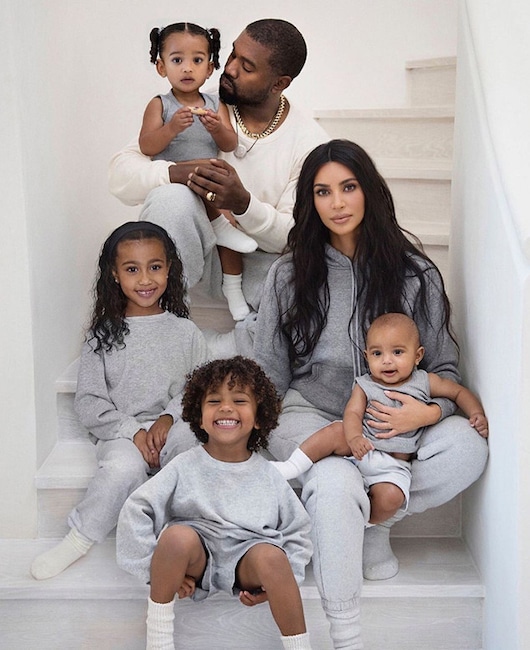 Kim Kardashian and Kanye West joined their four children for a smile-filled holiday card on the steps of their house. "The West Family Christmas Card 2019," Kim shared online. 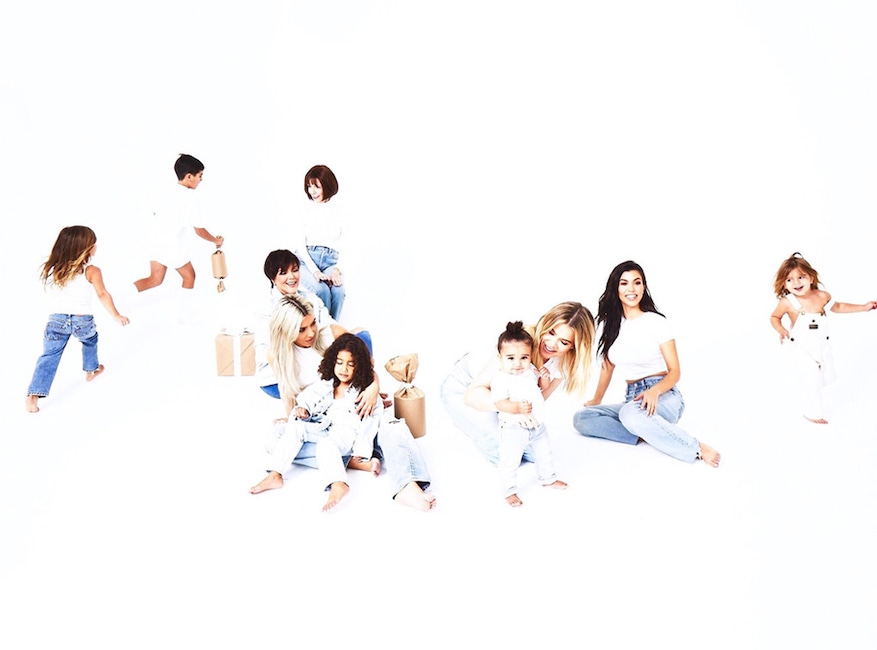 For Christmas 2017, the famous family released over two dozen different pics celebrating the 25 Days of Christmas. How cute does the whole gang look together here?! 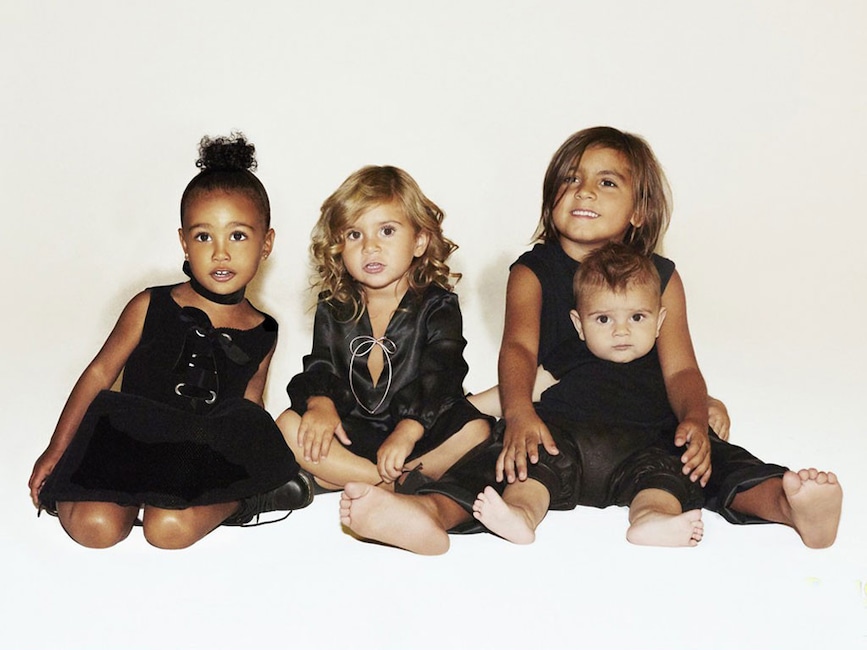 Kim Kardashian and Kourtney Kardashians' kids were the stars.

The Kardashian-Jenner clan went wild for this year's card with a carnvial-inspired set filled with sparkling gold money signs, mannequins and Kardashian-covered magazines. 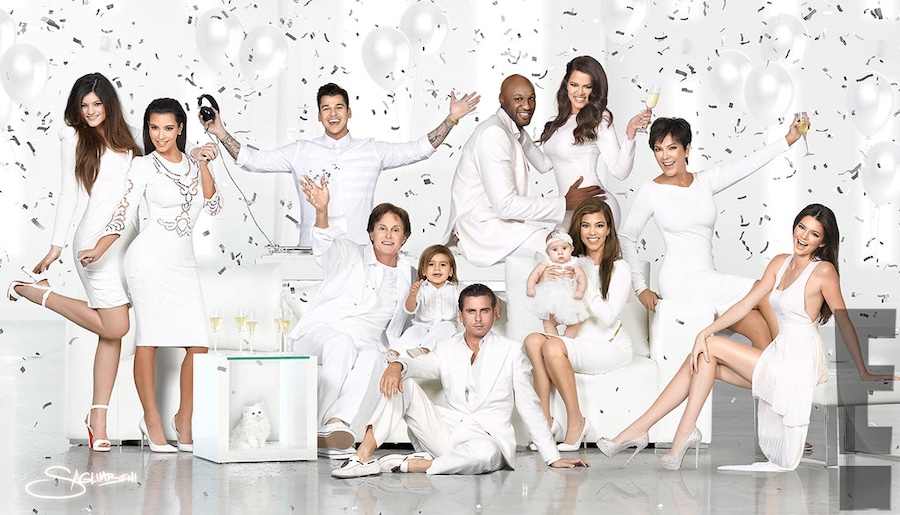 The family went "all white everything" for last year's Christmas card, which kinda doubles as a New Year's card with all the confetti. This was also the first year to feature little Penelope! 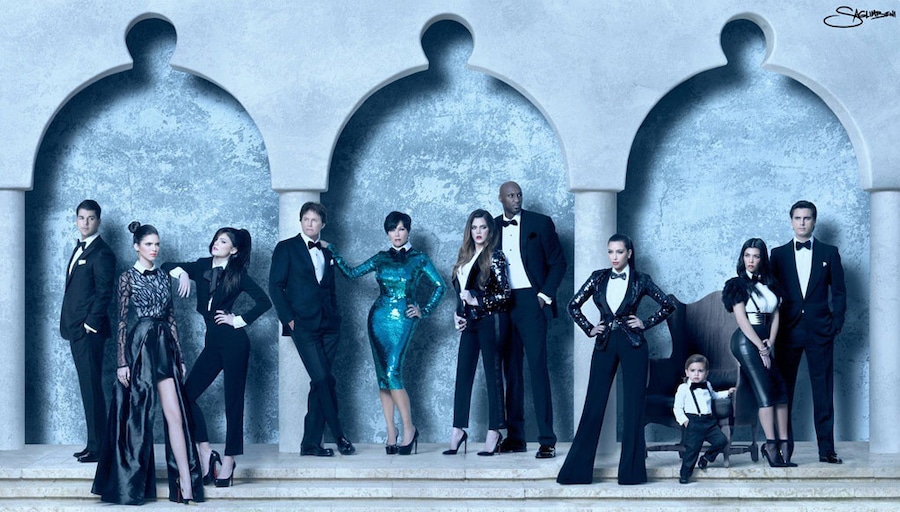 Middle Eastern influences and black-tie formal style dominated this family card. There was even a 3D version of the card sent out! 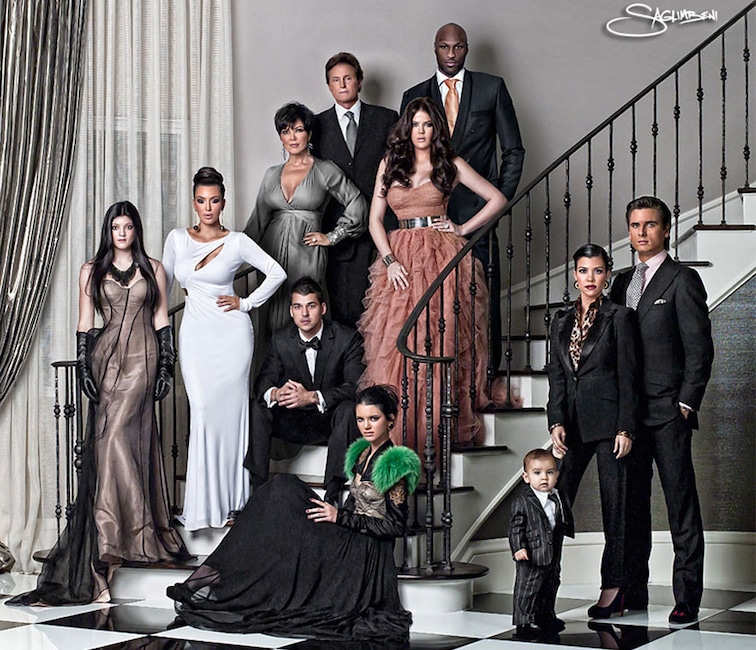 The family dressed in dramatic dark colors for this pic, except for Kim, who opted for a white Emilio Pucci dress. Look how cute Mason is in his little suit! 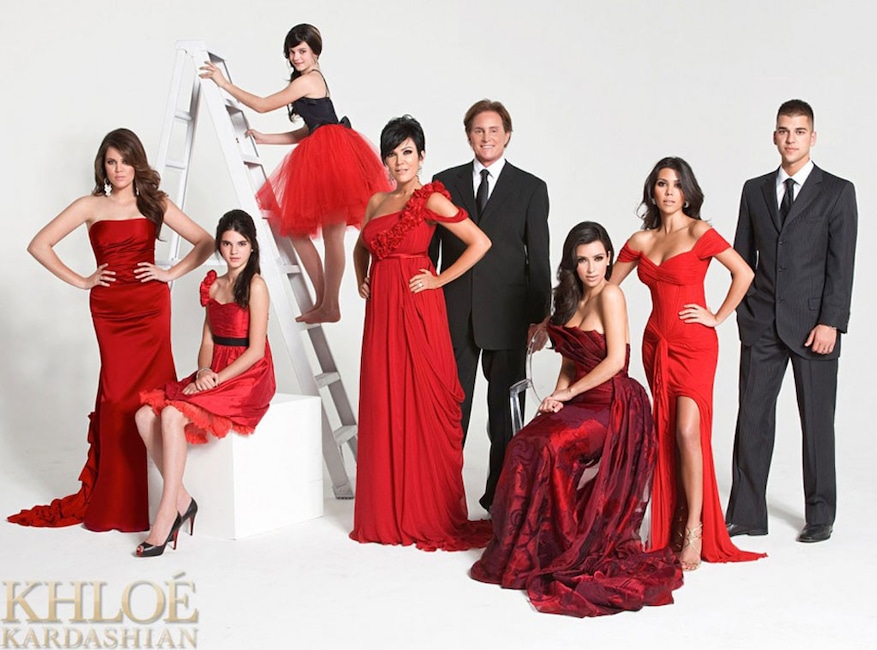 The girls all looked fierce in red dresses and gowns for the 2008 card, one year after Keeping Up with the Kardashians premiered 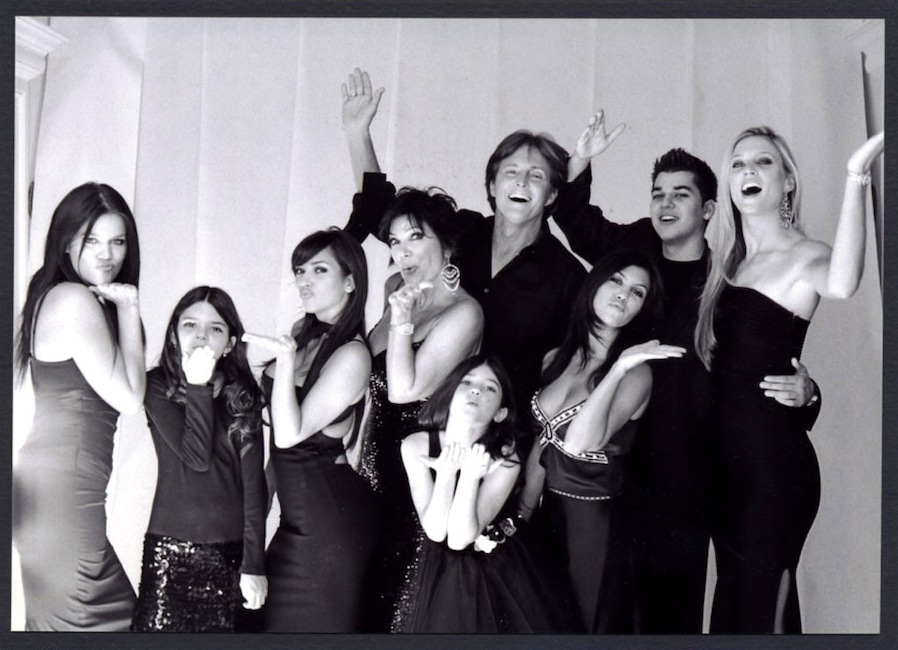 The family's 2007 card came with a message: "Life is not measured by how many breaths we take, but by the moments that take our breath away" 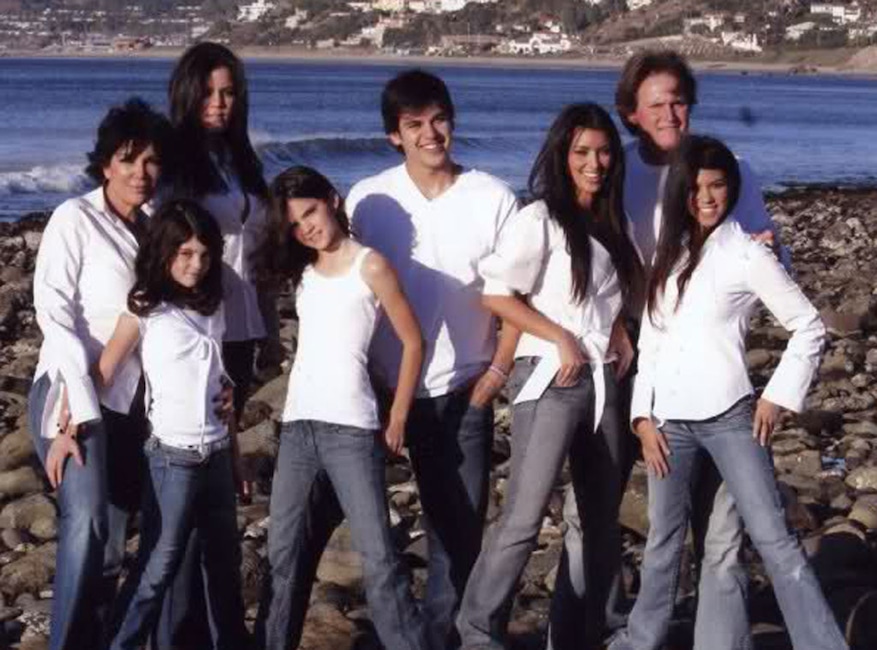 This family portrait is less winter-themed...unless you're from California, when it's never a bad time to be by the water! 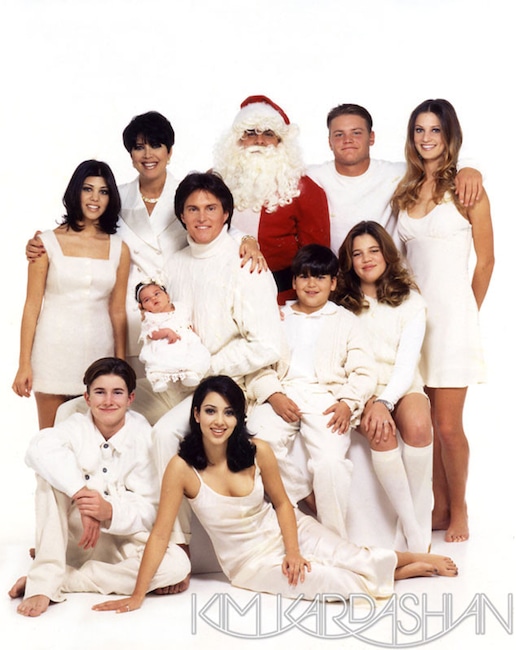 This card was taken at Kendall's very first Christmas, and Kylie wasn't even born yet! 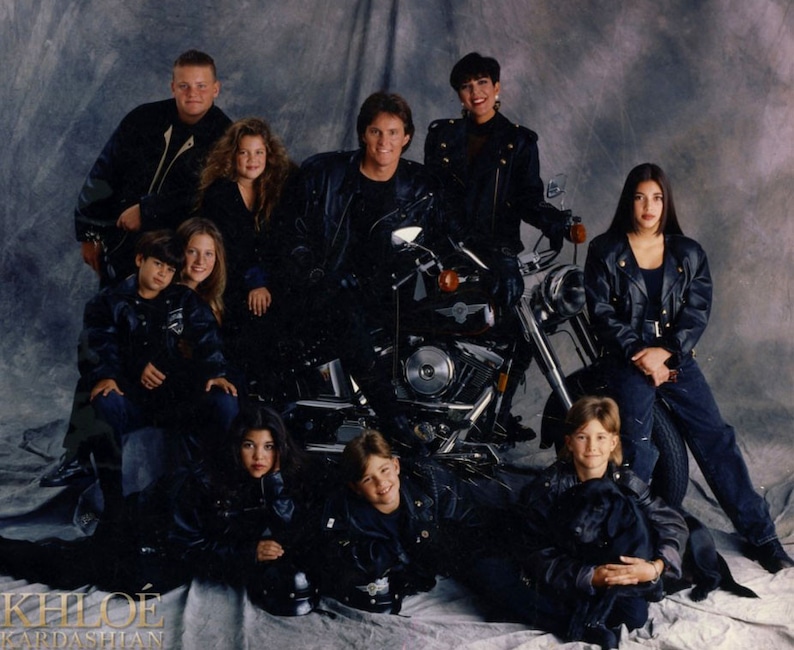 Bruce got a Harley for Christmas one year, so the next year the family all posed with it for their card. Fun fact: Khloé got a puppy that same year and called it Harley after Bruce's bike!

Santa himself showed up for this early 90's photo shoot with the family for their annual card. Everybody looks pretty surprised about it too! 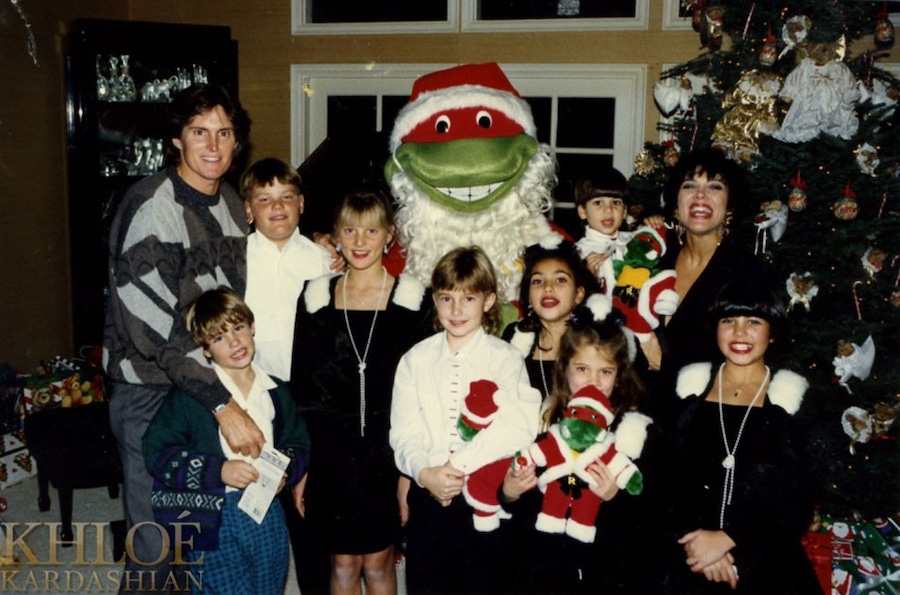 Any kid who grew up in the 80's and 90's knows how cool Teenage Mutant Ninja Turtles was, which is why the theme for this family card was TMNT. They even have a Santa Raphael!

Kim revealed that the photographer who shot the 2017 Kardashian and Jenner family Christmas card is Eli Linnetz.

The family posed for the card last month at a Los Angeles studio. Kim's kids and husband Kanye West, sister Khloe Kardashian, Kylie Jenner, Rob Kardashian and his 1-year-old daughter Dream Kardashian, mom Kris Jenner and Kourtney, Reign and her other kids Penelope Disick, 5, and Mason Disick, 7, were all spotted.

"Kris, Kanye and MJ were all wearing denim jackets," an eyewitness told E! News. "They spent several hours at the studio before Kris and Kanye gave each other a hug and said goodbye, leaving through a loading dock."