Rosie O'Donnell's Estranged Daughter Chelsea Announces Pregnancy: My Mom ''Will Not'' Be Involved

Rosie O'Donnell's eldest daughter is starting a family of her own.

Chelsea Alliegro, who the TV personality is currently estranged from, announced she is expecting her first child with husband Nick Alliegro. In an interview with the Daily Mail, the 20-year-old shared, "It's very exciting and I'm looking forward to it."

"I really don't care if I have a boy or a girl, I'm just hoping for a healthy baby. Nick would really like a boy," Chelsea added. "But as far as I am concerned, so long as it's healthy, that's what matters."

Chelsea also told the outlet that despite O'Donnell having a grandchild on the way, she has no intentions of patching up their roller coaster relationship: "Rosie will not have a part in this child's life... Rosie and I don't have a relationship any more. I don't think it can ever be mended. I really don't think there is any hope for our relationship."

A rep for the former View co-host declined to comment. However earlier today, Rosie shared a series of cryptic tweets alluding to an unspecified family matter.

"Dakotas ear surgery - u next to me - carrying ur sister out of the hospital - past her and her mom - late for school - protecting ur family," Rosie penned, referencing the 4-year-old daughter she adopted with recently deceased ex-wife Michelle Rounds.

The celeb continued,"protecting ur family... not words I would use to describe u."

The relationship between Rosie and Chelsea has been strained for years, reaching a boiling point in 2015 when the then 17-year-old was reported missing by her mother. Authorities later found Chelsea in New Jersey at the house of a 26-year-old man with an arrest record, including charges of heroin possession. However, no arrests were made as Chelsea had been there voluntarily and no drugs were found.

Earlier this year, O'Donnell released a statement claiming her daughter is "mentally ill" adding, "She is very sick. She is not capable of truth or reason. She has not been in touch with anyone since her husband tried to extort $9000 from this family." 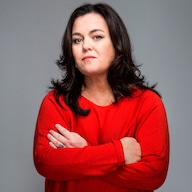 Chelsea subsequently fired back, calling Rosie "a cruel narcissistic vengeful woman who doesn't care for anyone but herself and her writing that on her website just shows how shallow hateful she really is."

In the Daily Mail interview, the mom-to-be also reflected on her former stepmom's passing. Rounds was found dead on Sept. 11 of an apparent suicide. "I was shocked," she shared. "It was very sad to hear about her death."

Chelsea said she's currently nine weeks pregnant and due in early May 2018. Upon the child's birth, she hopes to consider Rosie's first wife Kelli Carpenter their grandmother.