A Tale of 2 Quail Eggs: What It's Like to Be a Guest on Masterchef Jr. 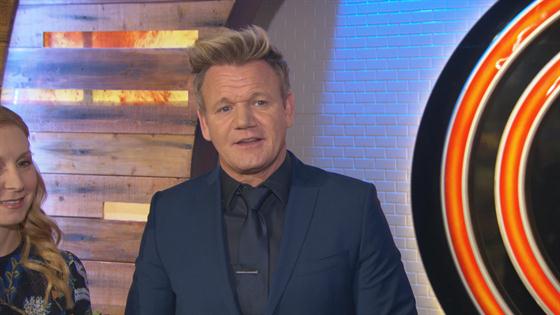 Throughout the several seasons that I've been watching Masterchef Jr., I've always had the same question: Can those kids actually cook?

I know they must have some cooking ability, but are they just good at cooking relative to the fact that they're young kids, or can they really cook? And should I feel bad about my own cooking skills, compared to these eight year-olds?

Last summer, I finally got to find out when I had the opportunity to attend a MasterChef pop-up restaurant on a beach in Palos Verdes, alongside a small group of fellow journalists, chefs, and food critics.

We were told that we were on an episode of MasterChef (which aired tonight on Fox), and that our food would be prepared by either the blue team or the red team. What we were not told ahead of time was that this was Masterchef Jr., and that the blue team had a combined age of 35. 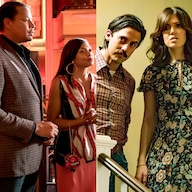 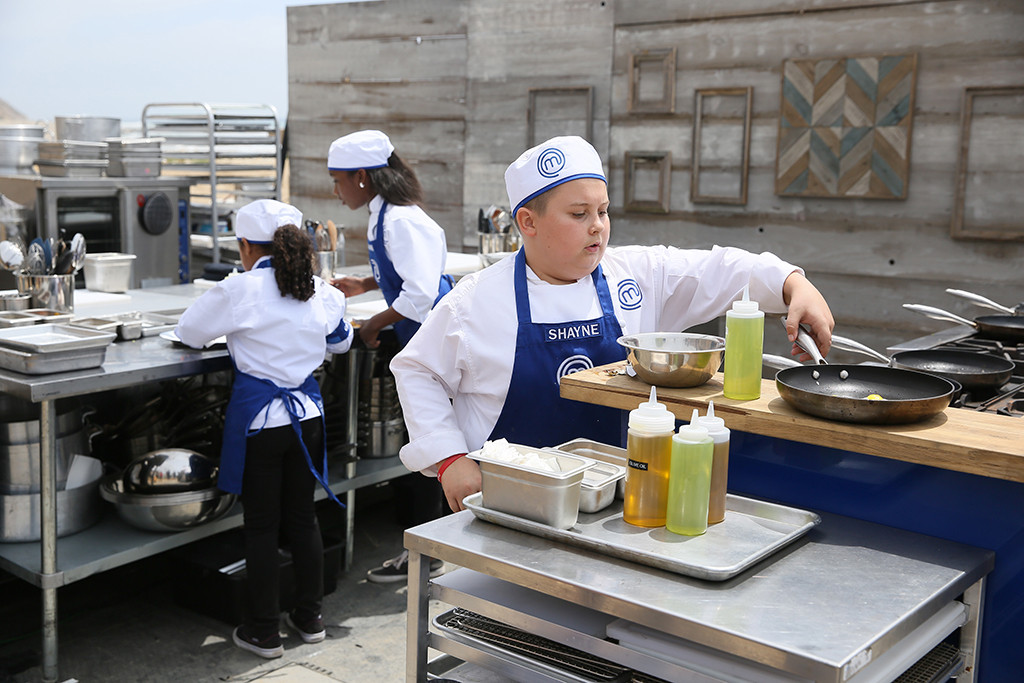 We were also given a dress code.

"Hampton's Upscale, Chic Beach Party or Yacht Club Attire," the invite said. "Dress as if it were a beach wedding.: i.e. linens, khakis, jackets, light summery attire with boat shoes, loafers, chinos, etc. The event will be on sand so refrain from wearing high heels. Please do not wear blue or red wardrobe to prevent confusion with the MasterChef blue & red team colors."

As someone whose main reference for the Hamptons is the ABC show Revenge, this was hard for me. I don't have time to launder linens and not one of my many pairs of shoes could be considered boat, but I managed a flowy white dress, some sandals, and a (sorry, blue) jean jacket. It was gonna be windy, so I gathered my (at the time, pink) hair into a very upscale ponytail and I was ready to eat on TV. 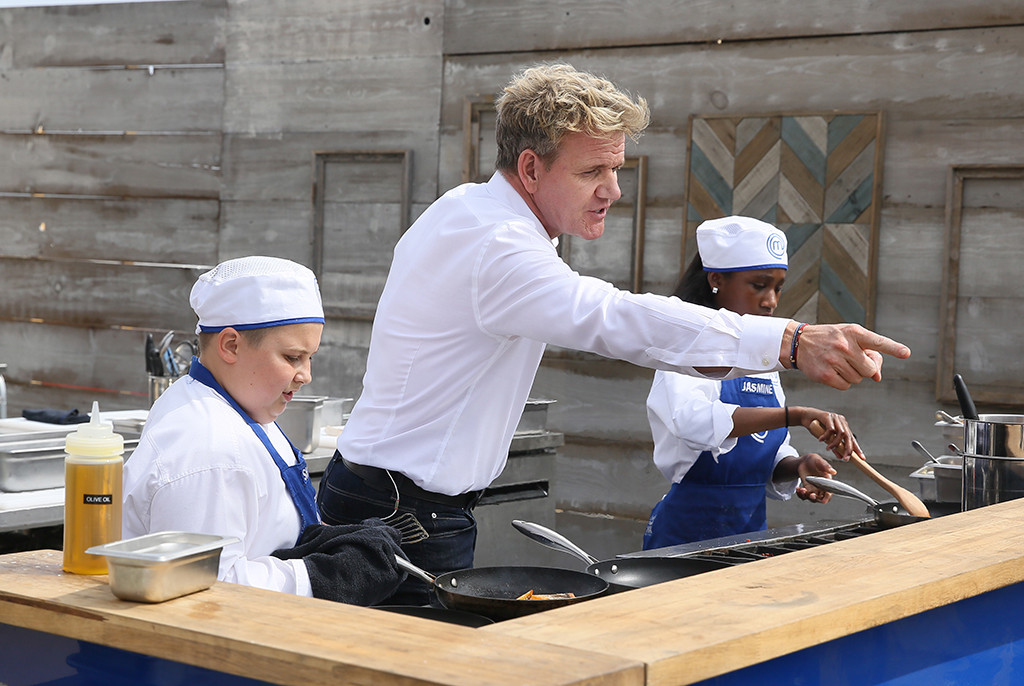 We arrived at the beach in fancy cars (because we were VIPs) and then walked across the beach to where a beautiful little dining area had been set up. Walking across long stretches of sand is already hard, but it's somehow harder when you know you're being filmed. By the time I made it to my table along with some fellow TV journalists, my calves were starting to scream and I was ready for the wine that was already being poured.

Even further down the beach, in a makeshift beach kitchen, the final six MasterChef Jr. contestants were, according to what I watched on TV tonight, completely freaking out. While we waited—patiently at first, and then impatiently as people around us started getting food—for our appetizers of scallops, polenta, and fried quail eggs, the red team and the blue team clearly struggled. My team, the blue team, particularly struggled with the eggs and the scallops. 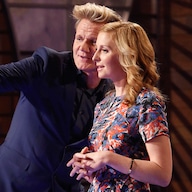 Gordon Ramsay's Advice for Masterchef Jr. Contestants Is Advice For All of Us 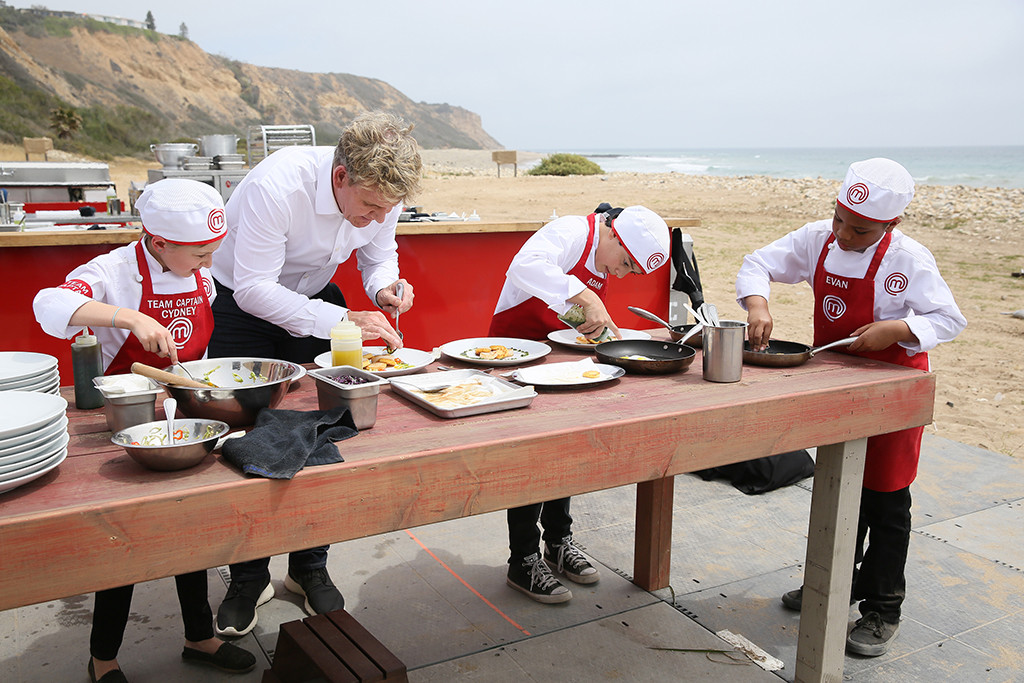 My big moment in the episode comes when my table is comparing quail eggs, and you can truly see how disappointed I am that I only got one. Everyone else at the table got three or four, but two of my polenta cakes were bare.

Now, I see how much trouble Shayne had with those tiny eggs, and I actually feel kind of bad for criticizing my lack of eggs. Those eggs looked hard to deal with! He was doing the best he could!

And in fact, my plate was delicious, despite the egg situation. Some of my tablemates had super salty scallops that were nearly inedible, but mine were perfect, if a bit "differently cooked."

And as for my expert egg and scallop critique, they had that camera in my face for a long time, and I rambled on inexplicably about my love of brunch and how I'm a foodie, even though I had never used that word before in my life. Luckily, they didn't use that (because why would they?), but they did use what was probably the only coherent sentence I managed to utter.

Up next was the entrée, which was a seared snapper with purple potato gnocchi and a chorizo sauce. I'm a bit of a gnocchi freak, so I went ham on those little purple potato pillows, which were great. Despite what we saw on screen tonight where the blue team struggled to cook their fish, that was good too.

It was all truly delicious. 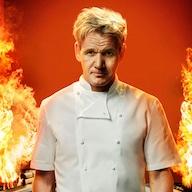 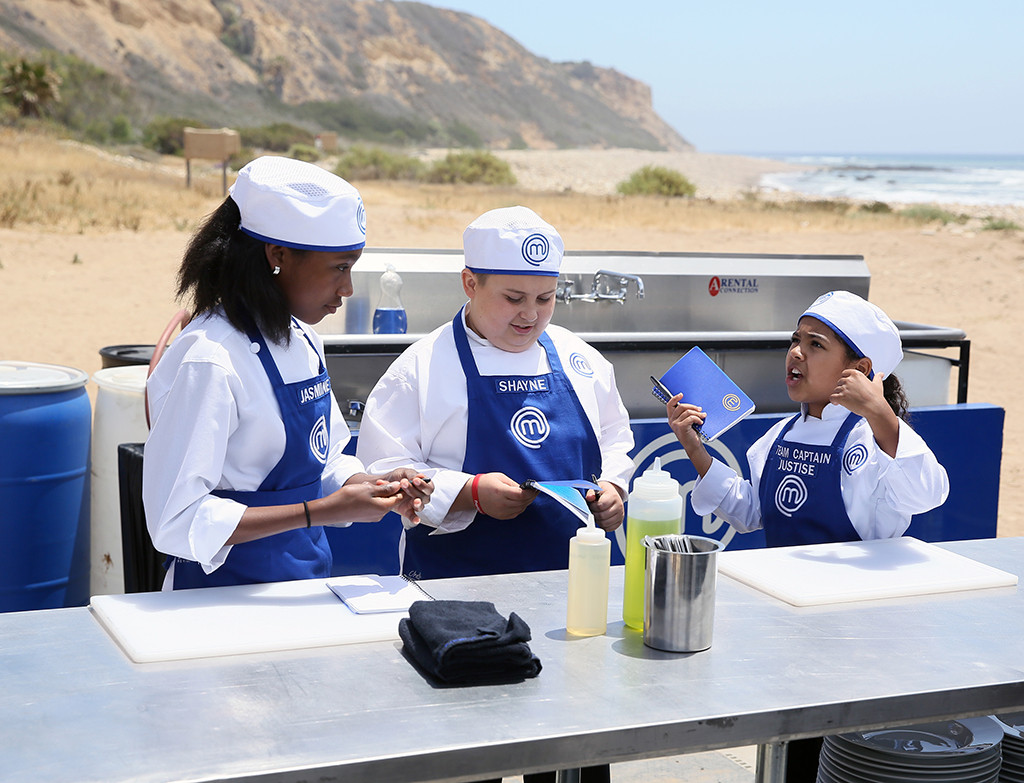 After all the plates had finally come out and our meals were finished, we filled out comment cards and waited to meet our chefs for the evening. As those kids came running across the sand and we all realized we'd just critiqued children on their ability to sear scallops, we smiled. We laughed. And I knew for sure that yes, the kids on Masterchef Jr. can really cook, and yes, they can cook better than me.

But it's fine. I don't feel any complexes about this at all. I didn't spend the past year beefing up my cooking skills in a quest to feel better about myself or anything like that at all!

Oh, and congrats to my team, the blue team, for killin' it and winning the night. You earned it, even if you still owe me two quail eggs.

TAGS/ TV , Top Stories , Entertainment
GET POP CULTURED!
*Email entered incorrectly. Please try again.
By subscribing to our newsletter you agree to the Privacy Policy and Terms of Use
Daily
Weekly