Bella Hadid Distances Herself From Fyre Festival Disaster in Twitter Apology: ''I Feel So Sorry''

After promoting the Fyre Festival in its earlier stages, Bella Hadid is doing her best to distance herself from the so-called VIP Coachella of the Bahamas, which quickly turned into "Millennial Armageddon" earlier this week. The supermodel, who didn't actually go to the fest that dissolved in chaos before it ever officially got started, took to Twitter on Saturday to address the failed luxury experience that left concert-goers without food or shelter on an island, once owned by Pablo Escobar.

"Hey guys, I just want to address Fyre Festival...Even though this was not my project what so ever, nor was I informed about the production or process of the festival in any shape or form, I do know that it has always been out of great intent and that they truly wanted all of us to have the time of our lives," wrote Hadid in the lengthy note. 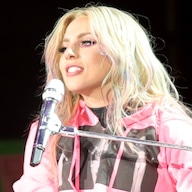 "I initially trusted this would be an amazing and memorable experience for all of us, which is why I agreed to do one promotion...not knowing about the disaster that was to come," the brunette continued. "I feel so sorry and badly because this is something I couldn't stand by, although of course if I would have known about the outcome, you would have all known too."

The Victoria's Secret model also said she hoped everyone who went was okay now. "I hope everyone is safe and back with their loved ones."

It sounds a lot like what rapper Ja Rule, who was one of the organizers, said on Friday about the botched fest. The rapper denied the event was a "scam," adding, "I truly apologize as this is NOT MY FAULT… but I'm taking responsibility." 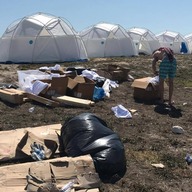 No Food, No Water, No Luxury Tents: The $12,000-Per-Ticket Disaster That Was the Short-Lived Fyre Festival

Initially, this weekend was supposed to be the inaugural Fyre Festival, intended to be a days-long event created by Ja Rule and tech entrepreneur Billy McFarland.  The opulent experience, which had tickets starting around $1,200 and eventually topping six-figure sums, was billed as a "cultural moment created from a blend of music, art and food."

The idea behind it was to gather millennials who like the finer things in life to the Islands of Exumas to party down in the most epic of fashions, but instead got stranded without beds and barely had food to eat.

"Yesterday was a very challenging day for all of us," Fyre Festival organizers wrote in a statement earlier today. "Billy McFarland and Ja Rule started a partnership over a mutual interest in technology, the ocean, and rap music. This unique combination of interests led them to the idea that, through their combined passions, they could create a new type of music festival and experience on a remote island. They simply weren't ready for what happened next, or how big this thing would get."

Organizers said the Fyre Festival would take place in 2018 on a beach venue in the United States and that they would add "more seasoned event experts" to help. Meanwhile, those who purchased tickets to this year's event will be refunded and will also received VIP passes to the 2018 festival.

Well one thing's for sure, Fyre certainly did make for a memorable festival, one that we can't imagine anyone would ever want to have again...

TAGS/ Bella Hadid , Festivals , Music , Top Stories
GET POP CULTURED!
*Email entered incorrectly. Please try again.
By subscribing to our newsletter you agree to the Privacy Policy and Terms of Use
Daily
Weekly