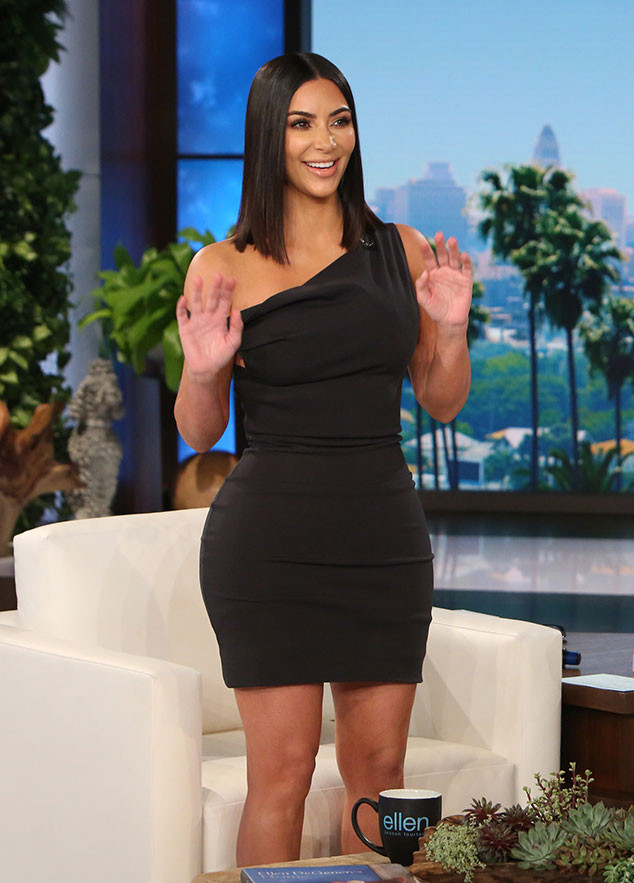 Much has happened since Kim Kardashian last appeared on The Ellen DeGeneres Show.

In Thursday's episode, Kim gives her first TV interview about being bound, gagged and robbed at gunpoint in Paris last year. Ellen DeGeneres begins by saying, "I don't know that everybody understands how horrific that experience must have been for you."

Kim points out that there's nothing inherently "bad with having things and working hard to get those things, and I'm really proud of everyone around me that's successful." But, the Keeping Up With the Kardashians star says, "I'm so happy that my kids get this me and that this is who I'm raising my kids [as]. 'Cause I just don't care about that stuff anymore. I really don't."

"Like I said, everyone gets so excited when they get things. Or, of course when you get engaged, you're going to show off your ring. If you get a new car—I don't care what kind it is—you get so proud and you get so happy and you show that off on social media. But it's just...it's not worth it. Like, I don't care about that stuff," she tells the talk show host. "I don't care to show off the way that I used to. Even though there's nothing wrong, truly—it's OK if you're proud of that and you work so hard and you get something—it's just not who I am anymore." 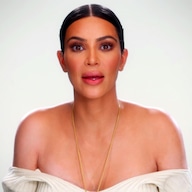 Ellen then asks Kim (who was wearing a Balenciaga little black dress) to walk her through the robbery. "It was almost 2:30 in the morning. But what was crazy is meeting with my attorneys and knowing the information that I know now, they had been following me for two years," Kim reveals. "They had been hearing interviews that I did, getting excited about this jewelry or this jewelry, and saying that it's real."

Kim will be less ostentatious going forward. "It's not to say that I'll never wear jewelry again or anything like that, [but] I truly don't know if I'd ever feel comfortable. I don't know if I'd ever wear real jewelry again," she says. "Just...my whole life as changed as far as how I travel and security. I never thought that I needed security staying outside my door, even though I had a lot of jewelry. If you think about it, yeah, I should have had a security guard outside my door 24/7 when I'm traveling and I didn't. Now, I have several, just for me to be able to sleep at night." 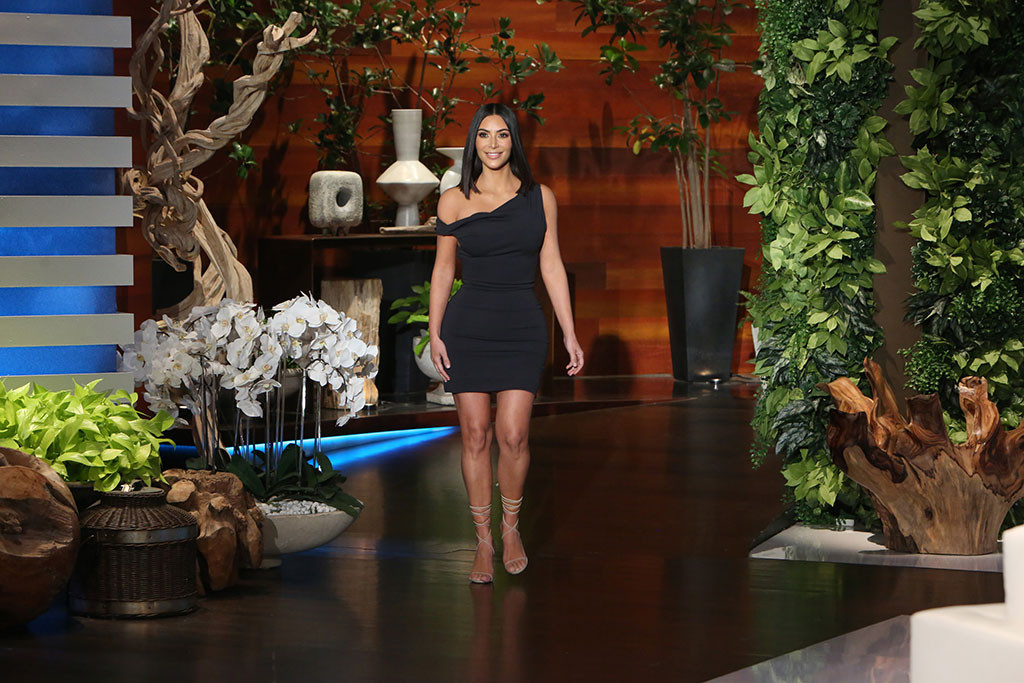 At the time of the robbery, she says, "The door was locked; I didn't answer the door. They held a gun up to the concierge that was downstairs and said, 'Let us up. Where's the rapper's wife?'"

Trying to lighten the mood, Ellen jokes, "How dare them not know your name!" According to Kim, "He let them up to the room and he opened the door for them—handcuffed, but opened the door. They'd handcuffed him and tied him up him in the stairwell so he couldn't [escape]."

As they entered her apartment, "I was just about to fall asleep, but I was awake," she says. "I heard people running up the stairs. I thought it was my sister and my friend coming home drunk and I was calling out to them. I debated going out or not going out all night, and I was like, 'You know, I'm just going to stay home and pack.' One of my high school friends, who's a stylist, was downstairs in a bedroom and they didn't know that she was there with us. She heard what was going on and she heard me screaming, so she called my sister and my security."

It was the worst moment of Kim's life.

"Automatically, you're stomach dropped. It's a feeling you can't even explain. Like, I knew that was it for me. I said a prayer, like, 'I know I'm going to heaven. I hope my kids are OK, and my husband.' I don't want to cry; you're making me cry," she tells Ellen. "But it does happen really fast. It was a good seven or eight minutes of torture, but when I look back and I analyze it, I'm like, 'OK, they weren't aggressive.' It could have been way worse, so I don't want to sound like I'm not grateful. I'm out, I'm home, I'm safe, I'm such a better person—it's OK. Let's move on." 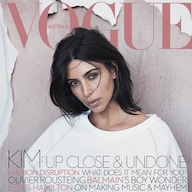 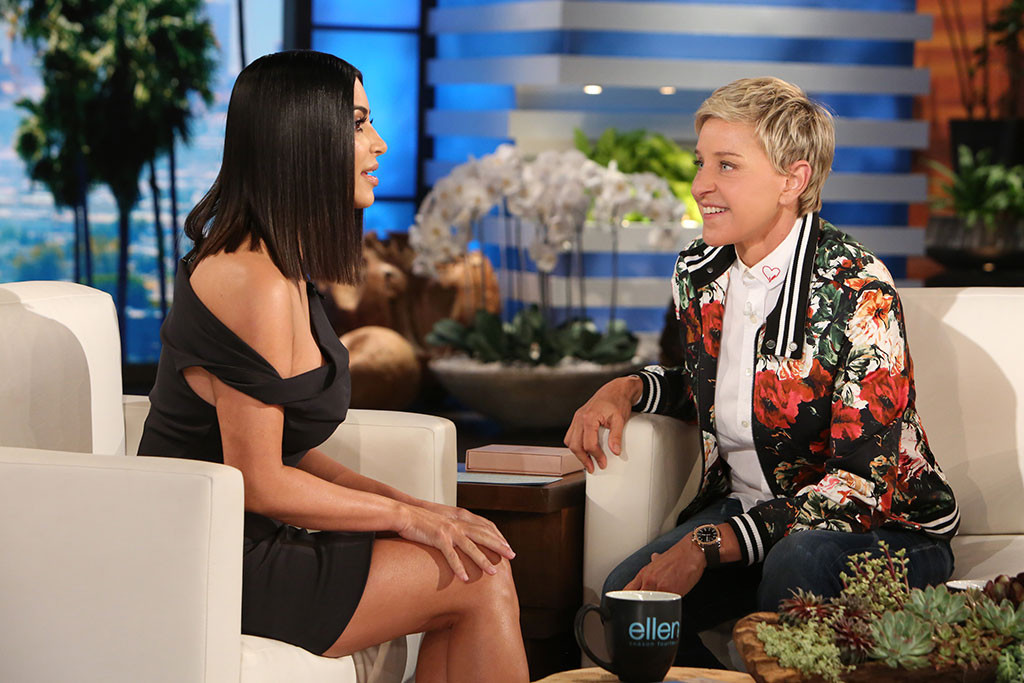 In the same episode, Kim also discusses Caitlyn Jenner's memoir, The Secrets of My Life, and how it's affected Kris Jenner. "My heart breaks for my mom, because I feel like she's been through so much...She's promoting this book and she's saying all these things and, you know, I just don't think it's necessary," she tells Ellen. "I just feel like it's unfair; things aren't truthful."

Kim claims Caitlyn is not being honest about "certain things" regarding her marriage to Kris. "I mean, I feel like it's taken her a really long time to be honest with herself," she says of Caitlyn, who revealed she is transgender in 2015. "I don't expect her to be honest about my mom now, but it's just so hurtful. Like, I just wish her all the success in the world, but not at our expense."

Kendall Jenner and Kylie Jenner are still close to Caitlyn, Kim adds. "I think my mom's been so respectful for so long and always wanting Caitlyn around and always wanting have a great relationship with Caitlyn. But I think, you know, for the Kardashians—she doesn't like to say that word or she said that in her book; on Diane Sawyer, she purposely never said our name."

Ellen points out that Kim was "so accepting" and one of the first people in her family to try to help everyone "understand" what Caitlyn was going through. Kim is still part of Caitlyn's life, but their relationship has changed. "I haven't talked to her in a couple of weeks," she says. "I'll always, always love her. That was my stepdad for so many years. She taught me about character and so much growing up, and I just feel like I don't respect the character that she's showing now. But, like I said, I'll still always have a major love for her, for who she was in my life. I'm really sentimental; I think my mom's that way. And I'll never say...you know, it's still Kendall and Kylie's dad, so I want to be respectful, but I just feel like there's no need for a book. You know, tell your story—but just don't bash other people. I just think, like, it's not tasteful."