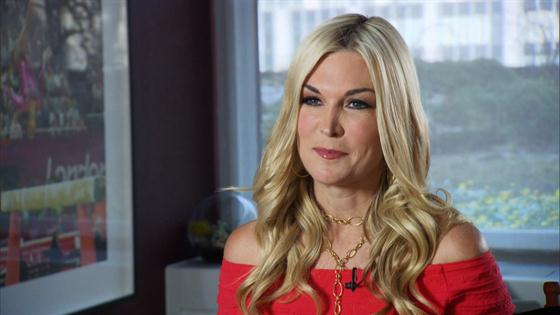 The Big Apple is about to get a dose of some fresh blood!

In tonight's new episode of The Real Housewives of New York City, the second in season nine, the newest Housewife on the block makes her first appearance as socialite Tinsley Mortimer makes her big debut. And as she told E! News, she couldn't be more thrilled about getting her giant gold apple.

"I am so excited to be a part of The Real Housewives of New York City. It happened in the perfect time for me," she said. "I was living in Florida and it was just such a great excuse to get back to New York. I'm supposed to be here. This is my town. I love New York."

The Official Ranking of The Real Housewives—All 96 of Them Mortimer is no stranger to reality TV, however. After rising to fame in the NYC social scene in the early 2000s, she landed her own series on the CW in 2010 entitled High Society, which she starred in alongside fellow socialites Paul Johnson Calderon and Devorah Rose. The show was canceled after only eight episodes. But as she tells it, it was the life she lived in between that show and now that's truly prepared her to rub elbows with the likes of Ramona Singer and Bethenny Frankel.

"I'm older. A lot has happened in my life and I think that kind of prepares you for things like this," she admitted. "I felt like after everything I went through last year, I can take the Housewives. If those girls try to bring any heat my way, I can bring it back."

(In April of 2016, Mortimer was arrested for trespassing in Palm Beach, FL after police were called to a private residence, responding to reports of a woman screaming on the property. The fallout of the arrest will play out during her inaugural season, which began filming last fall.)

Not only did Mortimer come into her tenure as a Real Housewife as a fan of the franchise—"I haven't caught every single season, but of course I've watched The Real Housewives of New York," she said—but she also arrived with some history with a couple of the gals, as well as a rather unique living situation. "I knew Sonja [Morgan] well going into the show. I also knew Luann [D'Agostino, née de Lesseps]. So I at least had those girls on my side in a sense. Such a great way to come into the show and move in with Sonja. Such a dear friend. It's just so nice of her to open up her house to me. All my furniture was in Florida. She's like, 'Come live with me.'"

Of course, moving in with a dear friend—especially when that friend is the delightfully kooky Sonja Morgan—didn't come without its own set of interesting rules. To hear Mortimer break them down, as well as a bit of insight into which of the other ladies she develops relationships with over the course of the season, be sure to check out the video above.

Are you looking forward to Mortimer joining the RHONY ladies? Sound off in the comments below!