Biggest Oscar Moments of All Time: Cuba Gooding Jr. Loves Everyone at the 1997 Academy Awards

Cuba Gooding Jr. was feeling the love at the 69th Academy Awards in 1997.

And for good reason! The then 29-year-old walked away with the Oscar for Best Actor in a Supporting Role for his role in Jerry Maguire, beating Fargo's William H. Macy, Shine's Armin Mueller-Stahl, Primal Fear's Edward Norton and Ghosts of Mississippi's James Woods.

From the moment presenter Mira Sorvino announced his name live from inside the Shrine Auditorium & Expo Center, it was clear Gooding would be accepting the award on his own terms. And while he may not have had the longest speech of all time, he did have the longest speech over the show's exit music.

After hugging Cruise on his way to the stage, an exuberant Gooding told the show's producers, "I know I have a little bit of time so I'm gonna rush and say everybody, and you cut away, I won't be mad at you. Tom said don't forget to thank your wife. I will never forget to thank my high school sweetheart and the mother of my children, Spencer and Mason. I love you, Sara [Kapfer]. And my parents who are here, Shirley and Cuba the first."

"And...God, I love you. Hallelujah. Thank you, Father God, for putting me through what you put me through, but I'm here and I'm happy. I just want to—"

Milestones at the 2017 Oscars

As the exit music began to play, Gooding laughed. "Oh, here we go! OK, the studio, I love you. And Cameron Crowe and...Tom Cruise! I love you, brother! I love you, man! Derek Brose, Shawn Suttles, Keith Butler, all my behind-the-scenes crew. Regina King, I love you! You did a great job when we made the movie! Everybody involved with the movie!"

In 2014, footage surfaced online that showed viewers what was going on behind the scenes in the stage production box as Gooding was giving his now famous speech. At the end of the rousing sequence, the lighting director shouted, "What a f--king opening! Woo! Phenomenal!"

It was a career-defining moment for Gooding—or so he thought at the time.

Hollywood was never able to "show him the money" and spin his win into box office gold.

Of course, it wasn't for a lack of trying.

"The studios don't see me now," Gooding confessed in a 2006 New York Times profile. "As a commercial entity, I know my stock is low." Filmmaker Lee Daniels, meanwhile, blamed Gooding's acceptance speech for the actor's demise. "It was a Stepin Fetchit performance," he said. "A lot of black people were put off. What happened from that point was he lost respect from the Boyz N the Hood crowd. And as a businessman he went out for the money. As an actor of color you have to be careful, and he chose to go for the money instead of the art." 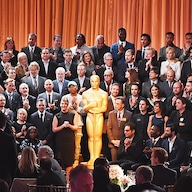 Oscar Class Photos Through the Years

Gooding himself admitted he was trying to "compete with Will Smith," one of Hollywood's most bankable stars of all time. "I thought people wanted me to make them laugh. But I was wrong on so many levels," he said. "I try to take all my energy and bravado and take it into comedy, and that's when I'm terrible. And it was also for the money. When I got to [the 2002 film] Boat Trip, I thought it was time to do something that was going to make me a $20 million player."

In the years after his Oscar win, Gooding also bounced around between talent agencies, including Creative Artists, Endeavor, International Creative Management, Paradigm, United Talent and William Morris. "It's hard to make decisions where you feel you're not getting enough out of the relationship and you have to move on," he told the New York Times. "That's how I felt after the Oscar, where I felt I wasn't getting what was coming to me. I had to make decisions for what I felt was due to Cuba Gooding. If I felt lied to, or whatever, I made changes."

Gooding stayed the course and earned raves for his roles in 2007's American Gangster, 2013's The Butler and 2014's Selma, among others. Not long after that, Ryan Murphy came calling.

A string of box office and critical failures followed his award-winning performance in Jerry Maguire (Men of Honor, Radio, Rat Race, Snow Dogs, What Dreams May Come), which made Gooding persona non grata. So, after the FX miniseries American Crime Story: The People v. O.J. Simpson became a massive success in 2016, he doesn't take his reclaimed success for granted. "I just got out of actor jail of doing 10 years of direct-to-video movies. It was an education I would have paid a billion dollars, if I had it, to get," he said. "At the same time, I'm starving. I'm hungry again, to work with these new voices. I'm staying focused on the process as an actor."