Jamie Dornan was taking his clothes off for the camera long before he was cast in Fifty Shades of Grey.

In fact, he once posed nude alongside a naked Malin Akerman for Abercrombie & Fitch. "You are selling clothes, right?" Seth Meyers joked on Late Night Thursday. "That was the whole question. I don't really know what we were selling," Akerman admitted. "We got to set and after two shots, the clothes came off. [The photographer] didn't want any clothes on us." "There's a good story to this, other than the fact that this was taken right after cops pulled you over and said, 'You guys have got to put some clothes on," Meyers said while examining the ad. "If your youth was that exciting, you'd have to be Mr. Grey to get off. You'd be like, 'I can't do regular s--t—I used to drive around naked. I can't get off the way regular people get off.'"

"Needless to say," Akerman told Meyers, "we got to know each other very well."

Meyers was also intrigued by the other male model in the photo shoot. "Let's not forget about this guy who wasn't in Fifty Shades of Grey," the host told Akerman. "He's like, 'Hold on! Let me give you a little more butt cheek.' He's like a seven-degree rotation from full crack in the lens." 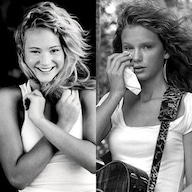 Since they were taking a trip down memory lane, Meyers also resurfaced a video of a young Akerman representing Canada in the Ford Supermodel of the World competition in Las Vegas. She may have looked poised, but she was in a lot of pain at the time. "As I was walking down the runway, my joint collapsed in my toe," she said. "Five months later I had to have surgery."

Before he showed the clip, Meyers gave her props, saying, "We're going to see the moment your joint collapsed, and I want to credit the level of model you are, because you are ice cold." After watching it, Akerman said, "A little bite of the lip went, 'Oh, s--t. Keep going! Keep going!'"

Long before she starred in Showtime's Billions, Akerman spent her first year in Hollywood auditioning for roles she never got. So, when she met three Italian men who wanted to turn her into a rock star, Akerman figured she had nothing to lose. "I didn't know how to sing, but I had a fantasy about being a rock star and I like leather," the 38-year-old actress explained. "The guy said, 'We'll teach you how to sing.' By the way, when an Italian tells you they're going to teach you how to sing, they just yell at you. 'Just sing!' [I was] bawling my eyes out in the closet."

"We never got a deal, and I left and went back to acting, which was a better choice," she said. "We did do the L.A. circuit: The Viper Room, the Roxy. The good thing about when you do live shows and you do rock 'n' roll is if you can't hit a note, you scream. And if you're really out of tune, the band just plays really loud so that they can't hear you at all. That's how good I was!"