While the room may have been filled with celebrities, Scarlett Johansson was the star of the night.

As one of amfAR's two Award of Courage recipients, the actress stepped out with a smile at Cipriani's in New York City Wednesday evening—her first red carpet appearance since news of her secret split from husband Romain Dauriac was confirmed.

Despite the personal news, the actress looked radiant and chic in a black double-breasted suit jacket with a white collar over a pair of matching black trousers while her pixie cut kept the entire look all the more cool. The star's ensemble certainly stood out in a sea of designer gowns filling the audience. As a source told E! News, Johansson seemed to be in great spirits and really pleased to be in attendance at the annual gala. "I never saw her without a smile," the source said. 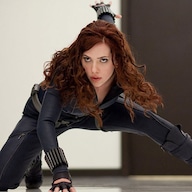 Her Avengers co-star Mark Ruffalo took the podium to present the award to his dear friend, calling her "no armchair humanitarian" as he applauded her for her efforts in Kenya, India and Sri Lanka working to better education and fight against disease and domestic violence.

"Funny, kind, socially conscious, beautiful and generous—I'm not talking about my mom. Scarlett Johansson is that person," he said. "We live in turbulent times, but if there are any young women or men out there looking for a role model, they need look no further than Scarlett Johansson." 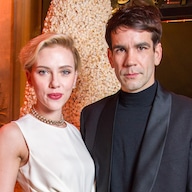 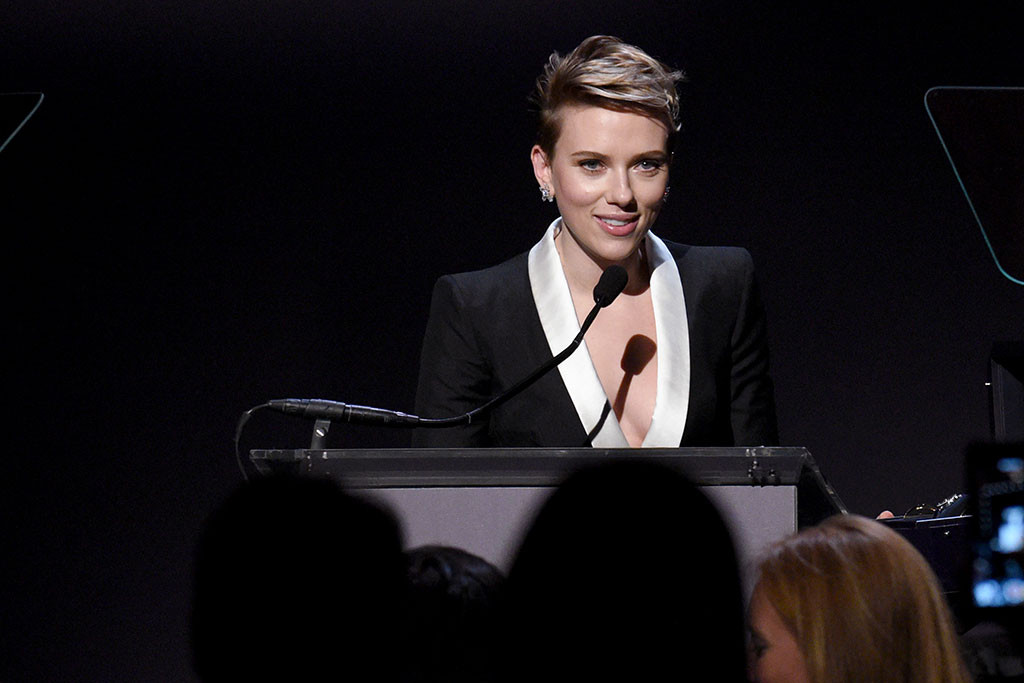 Upon accepting the honor, Johansson gave an emotionally charged speech about her mother's beloved friend who died of AIDS in the early '90s—her first encounter with the loss caused by the epidemic.

"I'd like to thank amfAR for honoring me tonight. I am deeply humbled in the presence of all of those present and not present who spend their lives dedicated to finding a cure for HIV/AIDS," she told the audience at the celebrity-packed event, sponsored by Moët Hennessy.

"I'd like to acknowledge the more than 37 million people around the world today that are still living and struggling with HIV/AIDS and to dedicate this award to all those that have lost their lives and the lives of their loved ones to this disease and when I look at this [award] and when I think of this night, I will always think of Tony."

Both sentimental and celebratory, Johansson also participated in the event's charity auction later on in the night, which featured high-profile items such as two tickets to the Golden Globe Awards and a Moët & Chandon vending machine filled with mini bottles of the champagne. The machine broke the record for an amfAR live auction with a $85,000 winning bid.

Johansson battled briefly with the evening's second honoree, Donatella Versace, over a photograph of Elizabeth Taylor. While Versace ultimately placed the winning bid on the picture, the movie star now calls a pair of Harry Winston diamond and ruby earrings her own for the charitable price of $50,000.

The actress' next high-profile appearance will be at the upcoming Academy Awards, where she will be presenting along with Halle Berry, Chris Evans, Jamie Dornan and more.