True love never comes free, but in Bachelor Nation, everything has a cost. And if you're a woman, you can expect those costs to be about four to five times that of your male counterparts.

That The Bachelor asks a lot of its participants is not news. That the emotional stakes are high and the stresses of living in a mansion/authentic Tuscan-style jail, alongside strangers for which you are competing not only for your future partner but your sanity and your dignity, are insurmountable is not groundbreaking. That contestants dedicate every waking second and the better part of their salaries to preparing for this journey is a well-documented fact.

Yet, that doesn't make the cold, hard numbers any easier to swallow—especially if you're of the female persuasion and harboring secret aspirations to one day join the ranks of the Lauren H.'s, the Danielle's, the Ashley I.'s yourself.

Season 20, in which the entirety of America is now engrossed, is the perfect example of the bizarre dichotomy that E! News set out to research. One quick glance at the contestants vying for Nick Viall's affection (or something else, whatever, we're not here to judge) and your eyeballs will be treated to the most perfectly primped, plucked and groomed women around. They're all impossibly fit, with impossibly shiny hair curled into impossibly beach-y waves. Now sure, most of them started off incredibly genetically #blessed, but the version of the contestants that makes it to the first rose ceremony comes with an insane amount of prep and money.

When we watched, say, JoJo Fletcher's season, the men were anything but. Why else did eventual winner Jordan Rodgers stick out so much, if not for his incredibly coiffed hair that suggested hours spent perfecting the gelled-wave in front of a mirror?

Much has been written about the different prep routines by Bachelor contestants over the years, so it was time to put the numbers to the test in a true side-by-side comparison. It's impossible to come up with one hard, cold figure because each person's preferences wildly vary, but after way too much research and some very candid conversations with former members of Bachelor Nation, women will spend anywhere from $1,800 to $8,000 before they hit the road to the mansion. Men, on the other hand, can expect to shell out between $300 and $5,300. 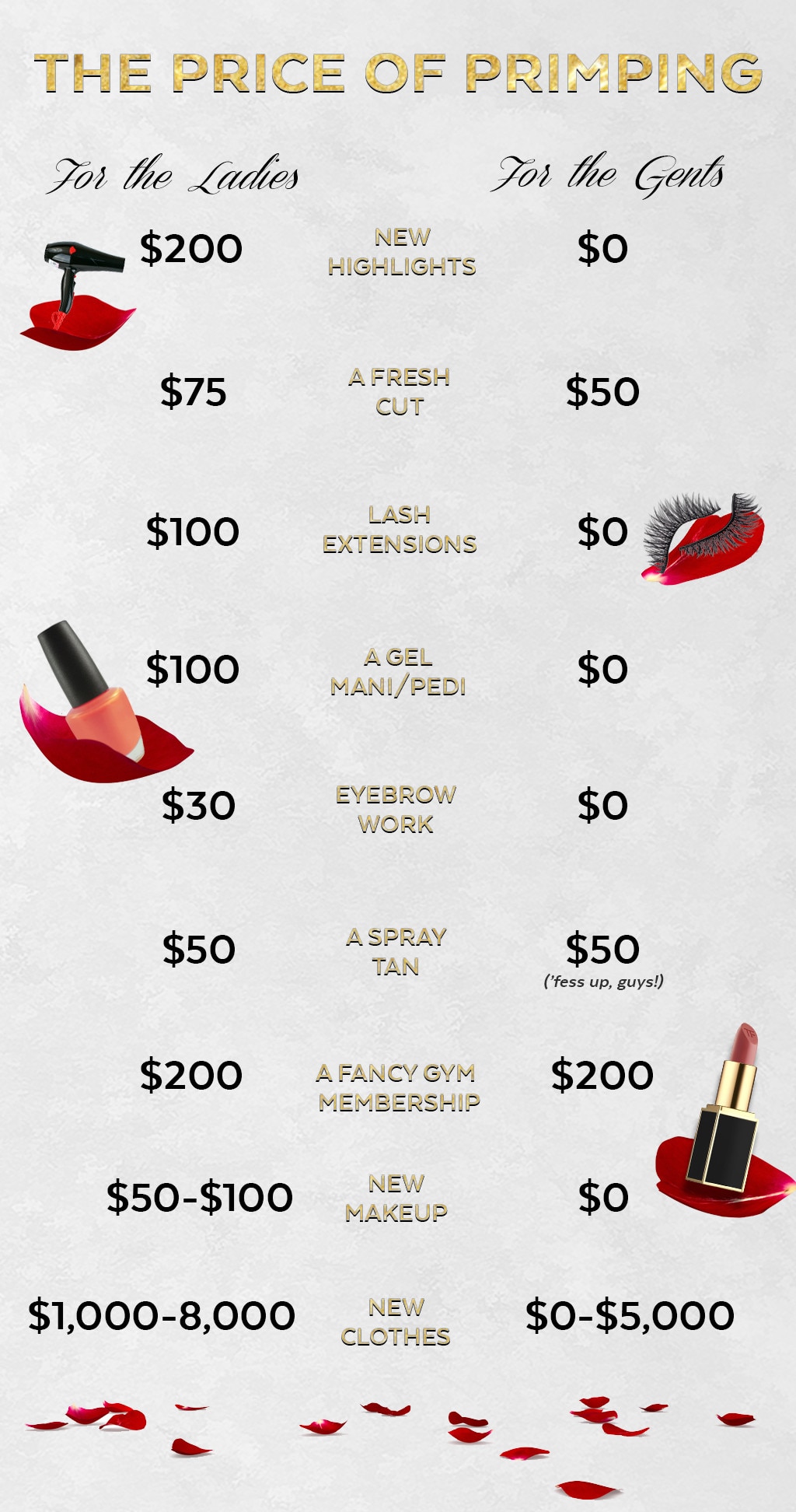 A few notes on method: Everything was calculated on the basis of being a first-time contestant; those who have powered through several seasons and franchises develop wildly different routines than they started with. As Sarah Herron, who most recently was on Bachelor In Paradise, told us of her first time jitters, "You spend way more than you normally would, because you know you're going on TV. And, you may be meeting your future husband so you feel like you need to dress to impress."

For women, getting ready for a stint on the show starts weeks, even months, out, most often with workouts. Whether their exercise of choice involves signing up at a ritzy gym like Equinox, or hitting up countless boutique fitness classes like SoulCycle, prepping one's body to be seen by millions of people (and often in absurdly little clothing as dictated by producers—we still have residual anger for poor Brittany's Eve-inspired wedding outfit) does not come cheap.

Then there are the beauty treatments. Some contestants have admitted to going a little over the top, doing everything from getting Botox to putting in extensions, while others did the exact opposite. Becca Tilley, who survived several seasons before eventually moving on from the show to launch her own blog and YouTube channel, admitted to being "completely naive" at the beginning. "I didn't watch the show to know what I was getting myself into," she told E! "The reality of the fact that millions were going to be watching me in a swimsuit...wasn't really something I was able to grasp."

For better or worse, most women fall somewhere in the middle. There are fresh highlights and haircuts to be had. There are lash extensions to be glued on. There are spray tans, eyebrow shapings, facials and manicures. Even doing the bare minimum, and avoiding top-shelf salons, that adds up. And the longer you stay on the show, the more likely you are to up the beauty ante. Which brings us to the dreaded Sephora shopping spree.

By all accounts, this was the one non-negotiable aspect of embarking on a Bachelor journey. Think of all the products you use during your daily routine. Now imagine you're going to be on camera at all hours of the day, and also hidden away in hotel rooms without access to the outside world (a.k.a. the store). This means that contestants find themselves stashing away foundation, blush, tampons and deodorant like it's the God d--n doomsday. At the bare minimum, they're going to spend a few hundred dollars.

Are you sweating and clutching your 401k yet? Because we haven't even gotten to the true money suck: The clothes. Each contestant needs to pack as if they're staying straight through to the final rose ceremony, with all of the climates and date activities that come with it.

"Whether you are confident or not, you must be prepared," warned Tilley. "I remember getting down to the end and thinking, 'I only have two outfits left that I haven't worn yet.' I packed just enough—in no way, shape or form did I think I would be at the end when I walked into the mansion that first night."

The lucky (or financially responsible, depending on how you see things) contestants will borrow from friends to fill out their wardrobes for cocktail parties and farm dates and hot air balloon rides and big city tours and, lest we forget, the ever-present cameras even at the earliest hours of the day. Repeat contestants are usually able to leverage their semi-fame to convince brands to send them free or borrowed clothes, but women who are brand new are often forced to hand over their credit cards a painful number of times.

Most viewers are still scarred by the scene during Ben Higgins' season when there were whispers of Olivia Caridi spending $40,000 on clothes, and while that was (thankfully) an exaggeration, the actual figures are still staggering. Former contestant Jillian Harris has admitted in several interviews that she shelled out $8,000 for her onscreen wardrobe, and Sarah Herron told us she spent about $5,000 total, on outfits and toiletries combined. Most of that money comes from...you guessed it...that freaking rose ceremony.

Most women already have an arsenal of casual wear, and even cocktail party outfits left over from their nightclub days, but nobody has a casual stash of gowns just sitting around, waiting to be worn on national television. And, like everything on The Bachelor, the longer you stay the more you need.

"Some of the gowns the girls wore were insanely beautiful and crazy expensive," Tilley recounted. "There were times when I just couldn't believe it. People would wear the most expensive dresses right off the bat, because no one knew how long they would have the chance to."

And then there are the men.

What to say about the men? Besides the obvious, that they have it so much easier. Those beauty treatments listed earlier? No lash extensions, no highlights (at least we hope so), no eyebrow work, no facials, no gel nail polish. A typical beauty routine involves a fresh haircut, a gym membership and, though few would admit to it, we're sure there are some spray tans in the mix.

Luke Pell, who was at one time everyone's favorite JoJo suitor and is now nursing a budding music career, told E! News that he did almost nothing differently in the lead-up to the show, save for some dental work that he needed anyway. Now sure, Chad Johnson probably paid a pretty penny for his protein shakes and sweet potatoes, but it's widely agreed-upon that he was not the norm.

Male contestants also take a pass on all the product hoarding. As Becca put it, "The makeup thing is crucial. Guys don't have to worry about looking beat at 5 a.m. after a long rose ceremony, with no makeup on." Luke's estimation of his pre-on camera routine? A solid 15 minutes, give or take the occasional ironing job.

And all the aforementioned wildly different wardrobe options? Scratch that. It's more like: A few shirts and ties, a few suits, and a few casual outfits. Men's clothing has the unbelievable benefit of being much more wide-ranging and easily interchangeable—and anyone who came to The Bachelor from an office job already had a closet full of suitable options. Pell is probably one of the outliers when it came to packing, telling E! he had to purchase four to five new suits and spend about $5,000.

"We received a general list of items to pack before the show," he explained. "It was basically: Pack for the North Pole, and the beach, and casual, and also formal, because we can't disclose filming locations."

Aside from the beauty treatments and the Sephora shopping sprees and the ball gowns, The Bachelor does have one great equalizer: Being away from work. Any future contestants would do well to remember that while your life in the mansion is happening, life back home doesn't stop. There are still bills to be paid, rent to be sent in and, most importantly, paychecks to be possibly not earned.

You can't really put a price on money you're missing out on, but then again, isn't that the theme here?