Are Hugh Jackman and Ryan Reynolds Hinting Pierce Brosnan Will Star in Deadpool 2? What is James Bond doing with the likes of Wolverine and Deadpool?

Pierce Brosnan, Hugh Jackman and Ryan Reynolds convened Tuesday morning, though at this point, only the actors know under which circumstances. Jackman and Reynolds, stars of X-Men Origins: Wolverine, each shared a photo on Instagram, leading fans to speculate that Brosnan might be involved in the Deadpool sequel, set for release in 2018. The trio struck a "hear no evil, speak no evil, see no evil" pose, implying they won't be sharing updates in the near future.

It's been confirmed that Cable will appear in the next movie, though his convoluted backstory will be streamlined. And though Deadpool suggested Keira Knightley ("She's got range—who knows?"), Stephen Lang, Dolph Lundgren and Liam Neeson have all been rumored for the role. 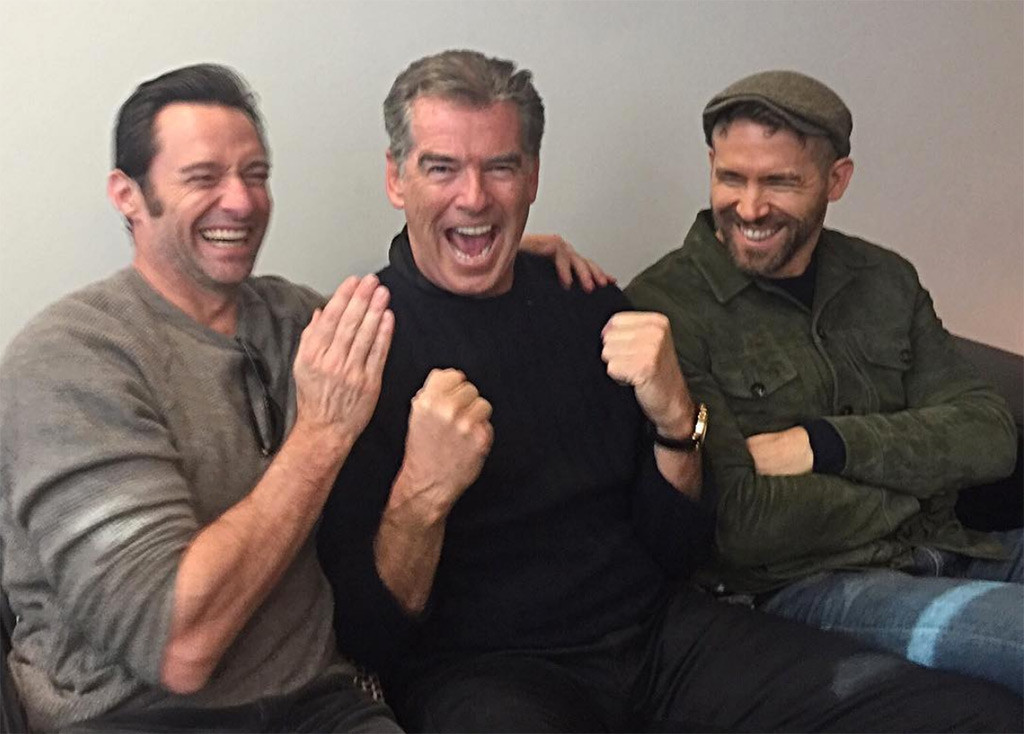 Perhaps Brosnan is being considered for the part. Either way, the actor is remaining mum.

But will Deadpool earn Oscar recognition next week?

"I've been out there campaigning," Jackman told Variety of supporting Reynolds, who spent years developing the movie with director Tim Miller and producers Simon Kinberg and Lauren Shuler Donner. "I think he should be nominated for everything. That stuff is not easy, when you know how much of it he wrote himself and created to keep that tone. Hats off to him."

Jackman, meanwhile, has long said that his days as Wolverine will end with Logan, in theaters March 3. "I'm really, really proud of this movie. I was really keen that I didn't leave the party feeling like I could dance more. I think I'm pretty much danced out, and I had a great time," he said of retiring his most iconic role to date. "It's been an unbelievable ride, but it feels right."

But what if 20th Century Fox were to green-light a Wolverine and Deadpool spinoff?

"I'm hesitating, because I could totally see how that's the perfect fit. But the timing may be wrong," he said. "I'm at the point where I'm finishing up. In terms of a theory, it's a great idea."

Perhaps Jackman will be swayed if Deadpool earns an Academy Award nomination.

"We had no idea we would ever get anything beyond an MTV Movie Award Best Kiss nomination," Reynolds joked to The Hollywood Reporter. If Deadpool receives a Best Picture nomination at the Oscars, it will be a "cool moment," for sure. Not just for those involved with the movie, he said, "but for everybody—for the people that went to see the movie, the people that made the movie, the studio, even the Academy. I don't think that any superhero film has ever really broken that glass ceiling, so it would be nice to see one like Deadpool do it. And I can certainly promise one f--king crazy reaction video online. In the Deadpool suit. Guaranteed."