Brad Pitt is adamant about protecting his and Angelina Jolie's children's privacy when it comes to the couple's divorce and custody battle.

The actor's lawyers this week filed a motion asking a judge to seal records regarding the six kids—Maddox, 15, Pax, 13, Zahara, 11, Shiloh, 10, and 8-year-old twins Knox and Vivienne. The attorneys had earlier this month filed a request to seal the entire case and were denied. However, the judge had said at the time requests to seal specific documents would be considered, as the children were all minor.

In their new filing, made on Wednesday, Pitt's lawyers allege Jolie and her attorneys have compromised the kids' privacy through court filings to try to undercut the actor in the couple's custody battle, according to court documents obtained by E! News. NBC News first reported the news Thursday. 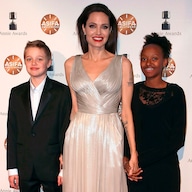 His lawyers say Jolie "exposed the children by making public the names of their therapists and other mental health professionals" and that this violated a previous agreement to protect the children's privacy.

They claim Jolie "appears to be determined to ignore even agreed upon standards relating to the children's best interest and she is attempting to clear the way to put in the public eye any allegations she can, without regard to the impact on the minor children," the documents state.

"[Jolie] apparently has no self-regulating mechanism to preclude sensitive information from being placed in the public record, or she has other motives pursuant to which she seeks to disseminate information in this proceeding which will be immediately made public, where the children can access it or where people in the general public will have access to it for their own uses, and who will not use such information in the best interests of the children," his lawyers continue.

Jolie has not commented.

A source told E! News there was no legal reason for Brad to file the new motion, as he and the actress both signed an agreement to seal the documents to protect their children and seal all info about him too.

Earlier this month, she and Pitt reached a temporary custody agreement, under which the kids will remain in her custody while the actor will continue to have "therapeutic visitation" with them and also take part in weekly individual therapy sessions with them. Pitt will also have to submit random drug and alcohol testing.

The deal came weeks after the FBI officially closed an investigation into Pitt regarding an alleged incident between him and one of his and Jolie's kids aboard a private plane in September.

(E! and NBC News are part of the NBCUniversal family.)