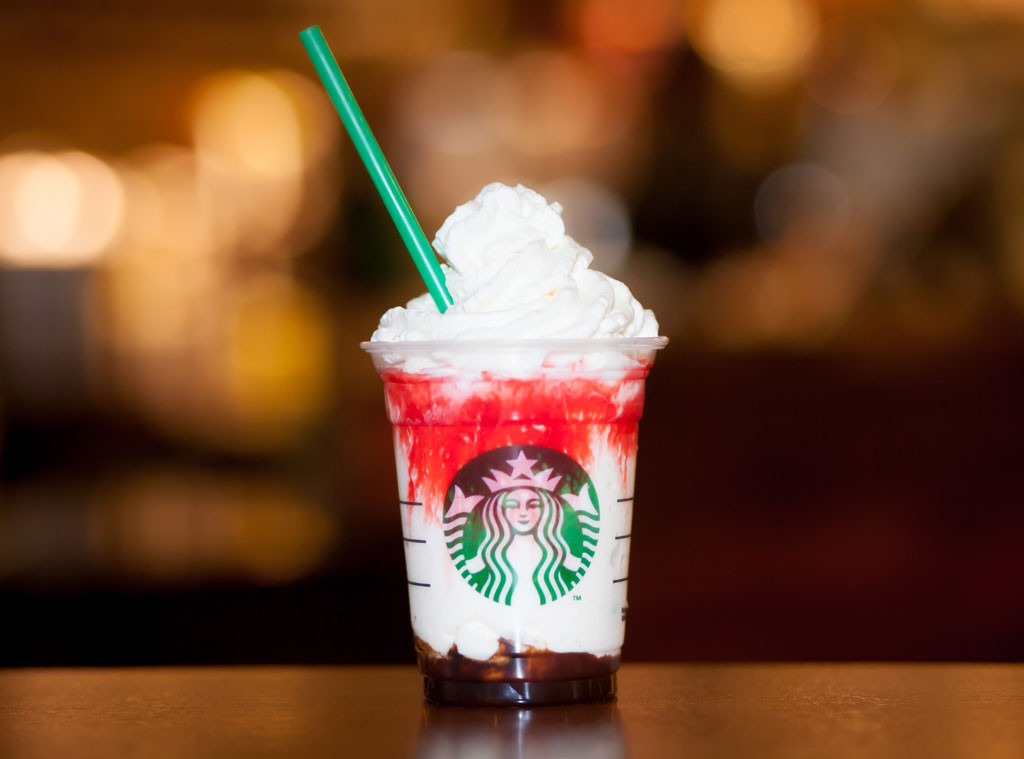 The above drink is called the Frappula Frappuccino. It was released last year for the Halloween season and consists of mocha sauce and whipped cream for the bottom layer, White Chocolate Mocha Frap in the middle, and blood-colored raspberry syrup on top. It's wild, creepy, and, believe it or not, it's not even close to the craziest Starbucks drink we've ever seen. That being said, in honor of Food Week here at E!, we're going to take you through our roundup of some of the tastiest, weirdest and grossest looking Starbucks drinks ever to exist. Here are our picks for the coffee chain's craziest drinks of all time. Drink it up!

1. Cherry Blossom Frappuccino. This looks about as delicious as it does gorgeous. If you're the kind of person who needs to 'gram their Starbucks before they drink it, this is the looker for you. It's a tribute to the Cherry Blossoms that bloom in the spring in Japan and is a mix of strawberries, cream, matcha and white chocolate. Say no more.

2. S'mores Frappuccino. If you can't break away for a camping trip in the woods, this might be the next best thing. This drink came out last year and is made up of some insanely delicious ingredients. Do you enjoy marshmallow-infused whipped cream? How about chocolate sauce and blended graham crackers? Mix that with some milk, ice and, of course, coffee, and you have yourself a drink.

3. Teavana Oprah Cinnamon Chai. This is on the list because we're living for the fact that Oprah got her own Starbucks drink. It's been blessing menus since 2014.

4. Caramel Waffle Cone Crème Frappuccino Blended Crème. This sounds like something straight off of the secret menu; but it's not. Get excited for "Waffle cone-flavored syrup and dark caramel sauce with coffee, milk and ice. Then top it with whipped cream, real pieces of waffle cone and more dark caramel sauce," notes Starbucks website.

5. Double Double Fudge Bar Frappuccino. Who wouldn't love two heaps of mocha sauce, vanilla syrup, coffee, milk and ice? We have no idea. Top that with chocolate whipped cream (what?!) and you've got one tasty stomach ache ahead of you.

6. Cotton Candy Crème Frappuccino Blended Crème. Again, this looks like it came straight off of the secret menu. Surprise! It's legit. Mix a little bit of vanilla bean with a dash of raspberry syrup, and add staples milk and ice. Top with whipped cream (of course) and have yourself the best day ever. Fun fact: Did you know this drink was created to celebrate the 20th anniversary of the Frap? Good call, Starbucks.

Had to see what all the hype was with this cupcake frap ???? It's everything and more ???? but I'm pretty sure I've had my weekly sugar intake. May be sticking to my black iced coffee #Starbucks #coffee #cupcakefrap #sundays

7. Cupcake Crème Frappuccino Blended Crème. This one is a blend of vanilla bean, milk, ice, hazelnut syrup and topped with whipped cream. A thing of beauty.

Go home, #Starbucks #SecretMenu you're Drunk! Would you try the #BabyVomitLatte ?? Look at all those ingredients! ??

8. Baby Vomit. Because this is a list of crazy drinks, we have to include some from the secret menu. We wouldn't recommend ordering this during the morning rush because it has SEVENTEEN ingredients. Also, it's called Baby Vomit so good luck not getting a few stares. We can't make this stuff up.

9. Ariana Grande Frappuccino. Get it? Grande? Ha. While this isn't on the menu like Oprah's Chai, she made her way onto the secret menu. Of course, it's a very glamours looking drink made up of the Cotton Candy Frap (see above), mocha syrup and chips and whipped cream topped with a drizzle of caramel. So chic.

10. The Most Expensive Starbucks Drink Ever. We had to end this wacky list with the wildest drink of them all. While this isn't on the standard or secret menu, one man managed to come up with the most expensive order of all time. Today reports the drink was $83.75 and so large; he brought his own mug to fill. As if that's not alarming enough, the concoction contained a grande latte base, 99 extra espresso shots and 17 pumps of vanilla syrup. GAGGING.

Thankfully, he didn't drink it and split it between him and his friends instead. Phew!