I Survived a Night Out With the Vanderpump Rules Cast 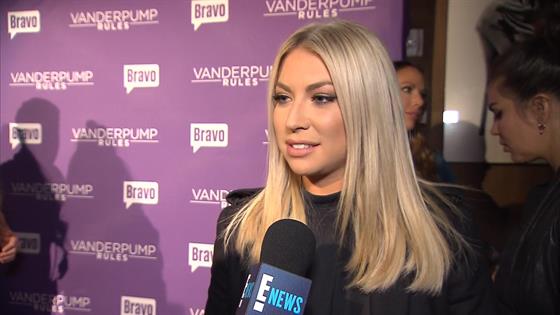 A miracle happened on November 2. I went on a bar crawl with the Vanderpump Rules cast and lived to tell the tale.

Let's back up to last April, when I finally gave in and watched the Bravo reality series I once vowed never to watch. I was phantom-sick (Long story short: I was convinced I had an ulcer, appendicitis or was dying; it was nothing, per Urgent Care's exhausted doc, who chided me for going on WedMD.com too often) and feeling sorry for myself over Easter weekend, and decided there was no better time to make my first trip to SUR—on TV, that is.

What followed was a marathon-binge, which included downing episodes faster than Jax Taylor can down shots. I couldn't stop, with each new betrayal, slap and shocking confession, I was hooked. Forget Westeros, who knew such riveting mythology was mere miles away from me in West Hollywood?! 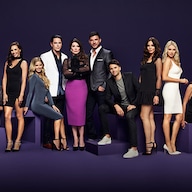 I quickly encouraged/forced a few friends to watch, and they also became enraptured. Sure, these people were our peers in age, but they often seemed like another species altogether, and we were anthropologists studying them, complete with text threads.

So now that the scene of my obsession has been thoroughly set, imagine my excitement when I found out Bravo would be hosting a bar crawl in New York City ahead of the season five premiere, and E! News was going to be exclusive broadcast crew to cover it. But it wasn't just any bar crawl, it was a "Vandercrawl," featuring the entire cast, minus Lisa Vanderpump, James Kennedy and Lala Kent.

While my idea of a wild night out is basically two glasses of wine and a froyo stop (with toppings!), I was ready to party. And so was the cast.

The first stop on the crawl was Kola House (a recent hot spot, I've since learned...at least according to a few Real Housewives' recent Instagrams), where I'd be doing the interviews and then was free to indulge in as many pumptinis as I'd like. 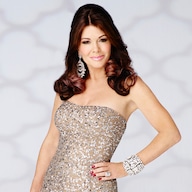 The first cast members I met? Tom Sandoval, wearing light-up suspenders and taking prep for his role as bartender at this location quite seriously, and Jax Taylor, who quickly told me he is the worst bartender at SUR, which is why they placed him at the final stop on the crawl, so people would be too drunk to care.

While I waited, I ordered one of Tom's pink drinks, which had jalapeno in it, so I loved it, and sipped a little too quickly. Oops.

The step and repeat was right where I was set to do interviews, so I watched the cast pose for photos, and while they took their respective turns for individual shots, I met Ariana Madix. We bonded over blinding ourselves with black eyelash glue and complimenting each other's outfits. Typical girl s--t, and I really liked her. 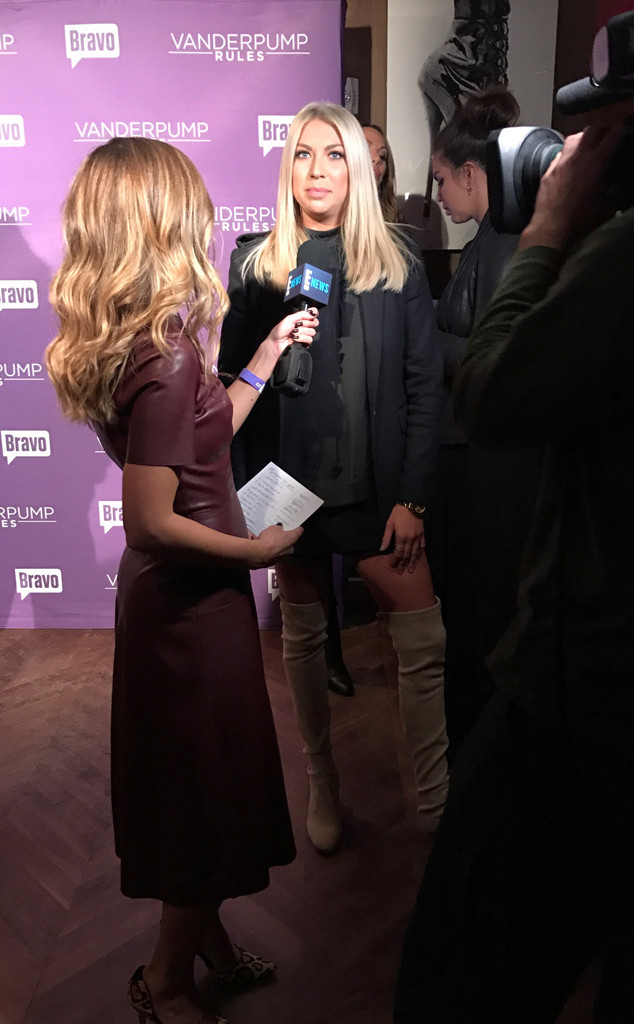 After their photos, I chatted with Stassi Schroeder first, and professional as ever, needed to know where her boots were from. She cursed a few times, which I liked, and was self-deprecating in a genuine way. Her hangover cure was legit, too: a banana and a fountain Coke from McDonald's.

The rest of the interviews were a rushed affair, with many breaks so the cast could Snapchat in various filters, trying to be in each one to avoid being left out. It was fascinating to watch in-person.

Highlights from the interviews? A thin Scheana Shay called James and Lala "assholes" and said she lost her boobs when she lost weight, Tom Sandoval seemed over the marriage questions (Sorry, dude!), Katie Maloney was wearing cool AF glitter lipstick, which I would later drunkenly go gaga over, and Jax is very much in love with GF Brittany Cartwright...and genuinely despises James. 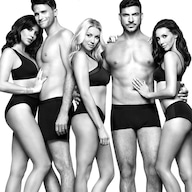 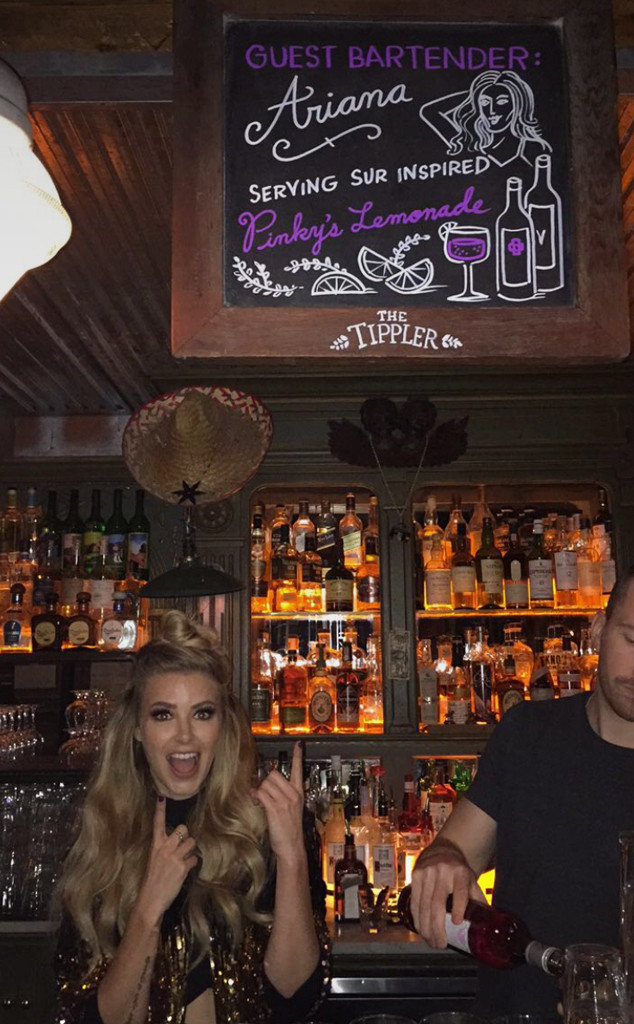 They all said there's a lot of drama going on right now within the group, and they aren't even filming! But no one would give up the goods...not even Jax!

When I was finally "off the clock" following a fun group interview with Katie, Tom Schwartz and Kristen Doute, I caught up with Bachelor in Paradise's Ashley Iaconetti, who once came to one of my Bachelor group's viewing parties (Don't ask!) and has never watched Vanderpump Rules. I told her she would be a good addition to the show. Oh, and she's not dating Wells or Jared.

At the second location, The Tippler (which was very cool), my new BFF (in my head) Ariana was guest-bartending, so I took a Snap of her behind the bar. Her drink was called "Pinky's Lemonade" and it was delicious. Lots of muddled stuff. I had three of them, and then took photos in the photobooth that came out horribly.

They had fun napkins that had quotes from the cast on them, and I put one in my purse that was one of Stassi's gems about wine. Why? I do not know, but it seemed right at the time.

My friend and I decided to go to the final location, No. 8, a bit early, where Jax was setting up his drink—a vodka cranberry with a splash of soda. It was fine. I had two—and chatted with him and Sandoval about how often they actually work at SUR anymore and if they ever feel like zoo animals when people come to the restaurant just to see them and take photos. Deep stuff.

After leaving No. 8, which was mostly a blur, but I remember telling Bachelorette JoJo Fletcher that all of the guys on her season have turned out to be kind of douchey on social media, I stopped in several bars near my hotel to find one that served sweet potato fries, my drunk food of choice, to eat while catching the end of Game 7 of the World Series.

In a Pump Rules-ian twist, I got into a bar fight with a man, well over 40, who kept stealing my cherished sweet potato fries in the 10th inning. When I told him to buy his own food, he yelled, "I'm a grown man! I'll do what I want, when I want!" When my friend started calling for a waitress, he grabbed his backpack and scurried out of the bar. "WHAT GROWN MAN WEARS A BACKPACK TO A BAR?" I yelled at his back.

I think the SUR gang would be proud.

Vanderpump Rules premieres tonight at 9 p.m. on Bravo. And make sure to head to E! News' Facebook page at 8 p.m. ET/5 p.m. PT as I'll be chatting live with Jax and Brittany ahead of the season five opener. Like on the bar crawl, alcohol will also be included.

TAGS/ Vanderpump Rules , TV , Top Stories , Exclusives
GET POP CULTURED!
*Email entered incorrectly. Please try again.
By subscribing to our newsletter you agree to the Privacy Policy and Terms of Use
Daily
Weekly