Give a girl a minute to breathe before sending her off down the altar!

Khloe Kardashian is Instagram-officially dating Tristan Thompsonnow, the NBA star's hand's debut appearance on Khloe's account confirming that there is a romance blossoming. And the eye-catching ring on that finger proved they've taken it to the next level.

No, not that level, you betrothal fanatics! The jewelry-sharing, "babe, wear my team ring" level!

But even before Khloe showed off her enviably bejeweled hand, a wine and gold Cleveland Cavaliers logo ring sandwiched among three diamond eternity bands, the engagement rumors had begun, Thompson trending on Twitter days ago because of an errant report that he had popped the question. 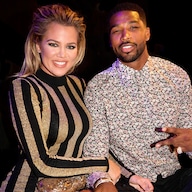 Is Khloe Kardashian Really Pregnant With Tristan Thompson's Baby? Watch to Get the Scoop on the Baby Rumors!

Of course the E! star's fans couldn't be happier for her. It's lovely to see her enjoying herself again after what she went through this past year, Oct. 13 having been the one-year mark since Lamar Odom's overdose prompted her to abandon their already two-year-long divorce proceedings in order to focus on his recovery.

She had been dating Houston Rockets star James Harden and, though he remained in the picture at first while Khloe dealt with Lamar, he ultimately wasn't the committed boyfriend she had been looking for.

"I just don't want to put up with people that you want to be monogamous but then they're not monogamous," Khloe, having already gone through the wringer during her marriage, told Lisa Rinna on an episode of Kocktails With Khloe after she and Harden broke up. 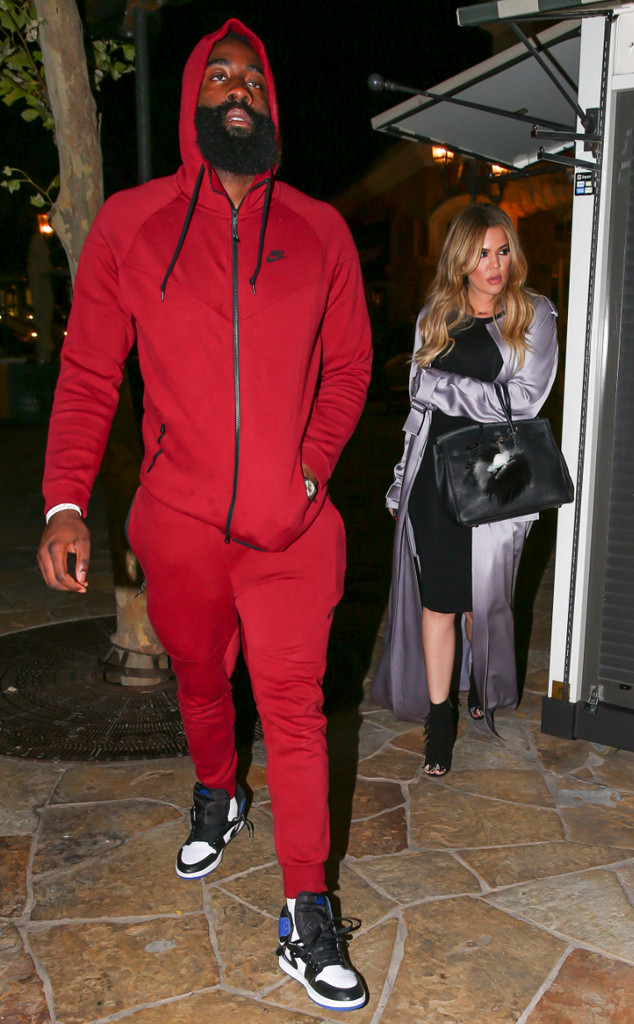 "I've always said, 'It's long distance. I've always said, 'We don't need to be monogamous! There's a lot of s--t going on in our lives. You live in Houston. I live in L.A. Let's see each other when we see each other,'" she recalled. "He wanted [a relationship]. I wanted it, but I wanted to be realistic. He sought me out. He wanted to be committed and, you know, then wasn't committed. So KoKo had to go-go!"

And who can blame her? But in that case, being familiar with the potential pitfalls of a long-distance relationship, she's taking yet another leap of faith getting involved with Thompson, who signed a five-year, $82 million contract with the Cavs last year. 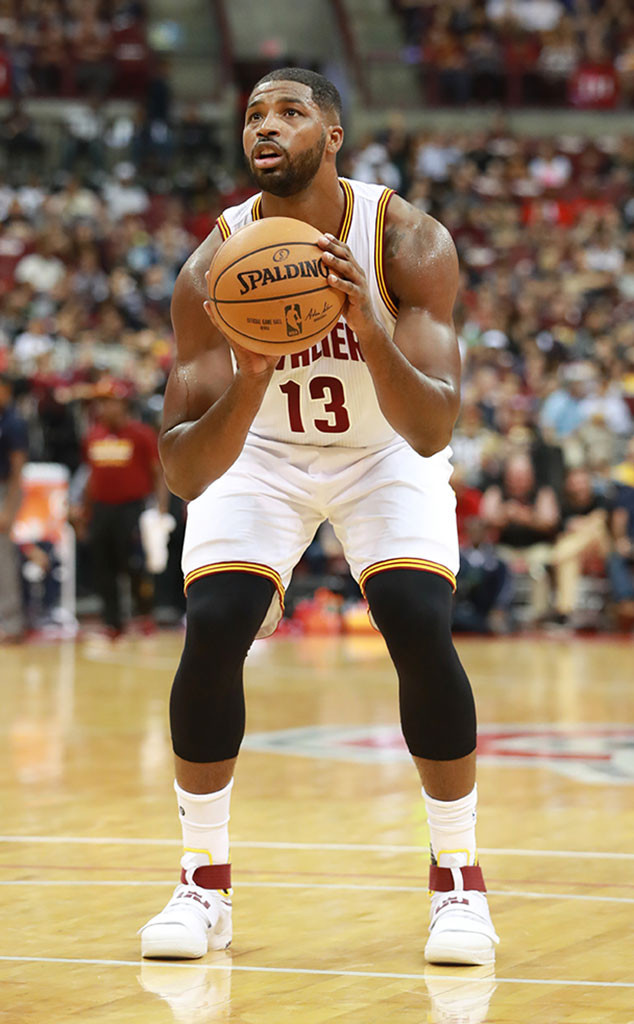 But they're going for it, and sources tell E! News that Khloe has met and hung out with some of the athlete's friends and is keeping some clothes in "the Land" to accommodate all the back-and-forth travel she'll be doing.

Suffice it to say, though, that reports of their engagement have been greatly exaggerated.

First of all, Khloe is just mere months removed from being tirelessly tangled up with helping Lamar recover, saying in February that wasn't really considering getting back together with him; but regardless, she couldn't help but think about their history together.

"It's really hard to erase everything that happened," she explained. "But just building a friendship back is what I'm doing right now. It's nothing intimately, nothing at all, just pure love. And I want someone to learn how to love themselves again." 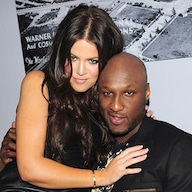 Khloe refiled for divorce toward the end of May, right around the time Lamar seemed to be slipping back into some of his old habits. 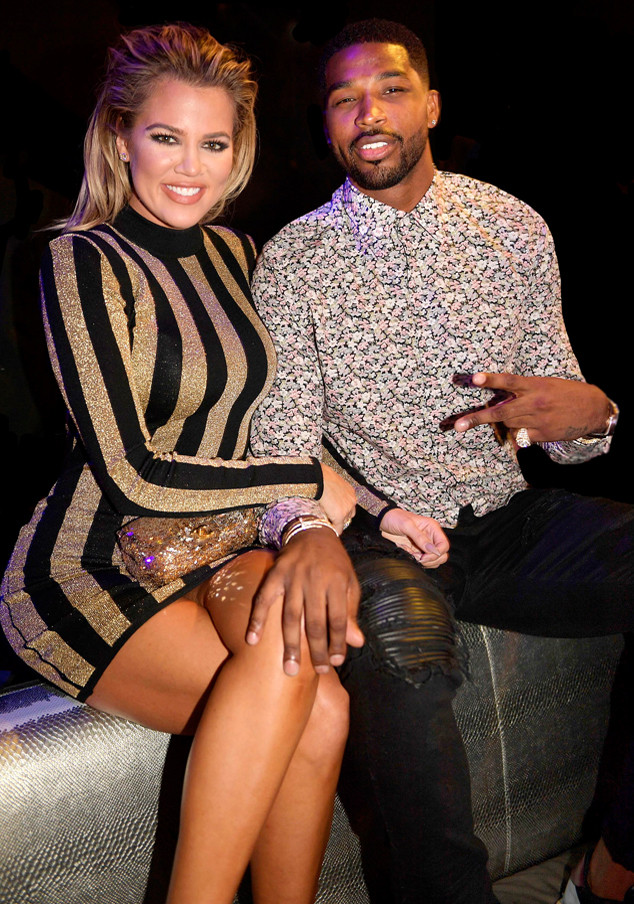 Since their marriage ended for all intents and purposes in 2013 after beginning with a 30-day engagement, Khloe has gone back to dating in a more relaxed fashion, one that indicates she isn't in any rush to tie the knot again.

She's also done the whirlwind courtship thing once, and it's hard to picture her doing that again, especially with someone who lives 2,000 miles away. (Remember, celebs hop cross-country flights the way that regular folk order Uber, so logging frequent flyer miles isn't always the same as getting serious.)

Moreover, basketball season just kicked off last night, and Thompson will be zipping all over the place for at least the next six months, plus two more provided the Cavs make it back to the NBA Finals again, as experts are predicting they will.

Not to mention, Khloe's on the super-busy side herself these days. She just oversaw the well-received launch of her accessible-denim-for-all line, Good American, and she's got plenty on her plate with her app and website; promoting her latest book, Strong Looks Better Naked and the current season of Keeping Up With the Kardashians; and making her own slate of appearances around the world.

Really, an 82-game schedule's got nothing on Khloe's to-do list, which is why it's certainly a marvelous time to date and have a boyfriend—if not a fiancé after less than two months.

Can't we all just be satisfied that the Cavs opened with a win last night—with, good luck charm alert, Khloe in attendance—on the same evening they received their 2015-16 championship rings? Which you can get a nice, close look at on Khloe's Instagram account.

And that's plenty of bling for now, thank you.

Don't miss a new episode of Keeping Up With the Kardashians Sunday at 9 p.m., only on E!