Enjoy your last look at Rogue One: A Star Wars Story before its Dec. 16 release.

The action-adventure movie stars Riz Ahmed, Felicity Jones, Diego Luna, Ben Mendelsohn, Mads Mikkelsen, Genevieve O'Reilly, Alan Tudyk, Jiang Wen, Forest Whitaker and Donnie Yen. As has been true of its seven predecessors in the Star Wars series, Rogue One's plot details have been kept to a minimum so as not to spoil the fun for audiences. "In a time of conflict, a group of unlikely heroes band together on a mission to steal the plans to the Death Star, the Empire's ultimate weapon of destruction," Lucasfilm says in the blockbuster's official synopsis. "This key event in the Star Wars timeline brings together ordinary people who choose to do extraordinary things, and in doing so, become part of something greater than themselves."

The trailer opens with a flashback, in which Jyn Erso (Jones) remembers her father (Mikkelsen) telling her, "Whatever I do, I do it to protect you." Flash forward to the present day, when Jyn is recruited by the Rebel Alliance and asked to reveal her father's whereabouts. "It appears he is critical to the development of a super weapon," Mon Motha (O'Reilly) informs Jyn. That super weapon, of course, is the Death Star—and Jyn will stop at nothing to rescue her father and disarm the space station. "If my father built this thing," she tells her fellow rebels, "we need to find him." Easier said than done, of course—especially when it's revealed that her father is at Darth Vader's mercy. (Yup, he's back.) "We have hope," Jyn says. "Rebellions are built on hope."

"Save the rebellion!" Saw Gerrera (Whitaker) shouts. "Save the dream."

WATCH: Breaking down the new #RogueOne: A @StarWars Story trailer and details about the movie. https://t.co/5FLtiPqfgo

Jones appeared in a pre-taped interview after the trailer premiered. Speaking about her character, she said, "She's incredibly determined. She's an absolute survivor. At the same time, she has moments of great vulnerability and is not perfect. She's not a perfect human being."

Mendelsohn, meanwhile, was more vague about playing a villain. "You will see me with people you know already, for sure," he said on Good Morning America. (Odds are he was talking about Darth Vader, but you never know!) 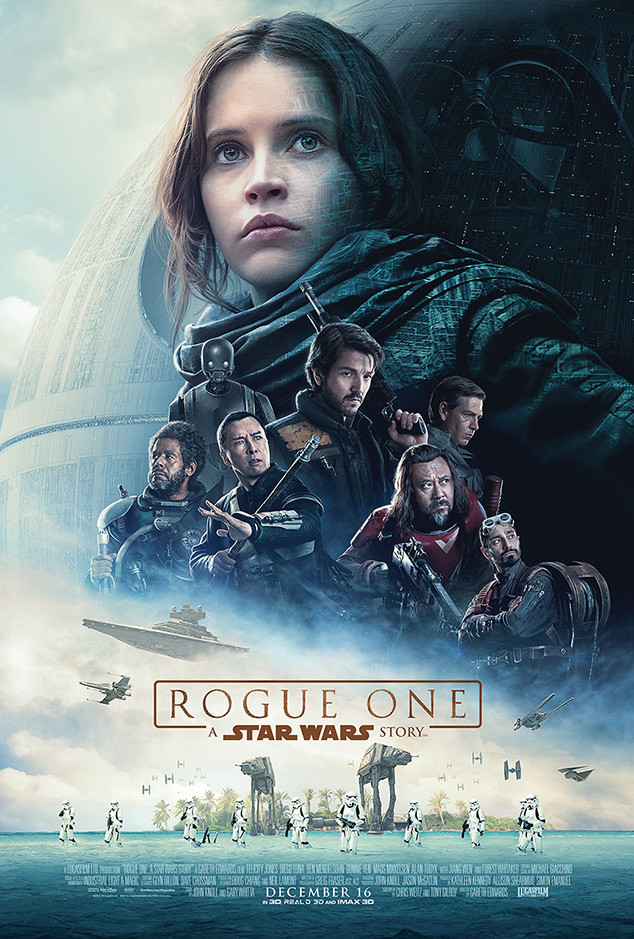 Unlike the biggest movie of 2015, Star Wars: The Force Awakens, Rogue One is a standalone film, not a continuation. The film's first trailer debuted to heavy fanfare in April, followed by a TV spot in August.

Jones was careful not to reveal too many details when she appeared on the BBC Radio 1 Breakfast Show Thursday morning. "I am saying nothing. It's all finished. It was absolutely extraordinary. I had pretty much a life-changing experience making it. Every day you're turning up and you're looking up and there's a giant monkey shooting at you with a blaster—with laser fire—so it's pretty cool," the actress told host Nick Grimshaw. Later, Jones said, "I've seen parts of it, and it's really cool, but I haven't seen it all yet. I'm anxiously and eagerly waiting to see it."

Filming Rogue One was a dream come true for the Oscar-nominated actress. "It's a little bizarre, when you get back home and you're buying a pint of milk, and you think, 'I've just been talking to a little, many-tentacled creature all day. This is a strange, strange life,'" Jones admitted. Later, she told Grimshaw, "It's very cool—especially when you go to work and they say to you, 'Can you just pretend that you're in hyperspace?' Which, you know, you don't get to do that every day."