Meg Ryan Versus Julia Roberts: Who Was the True Queen of '90s Romantic Comedies? 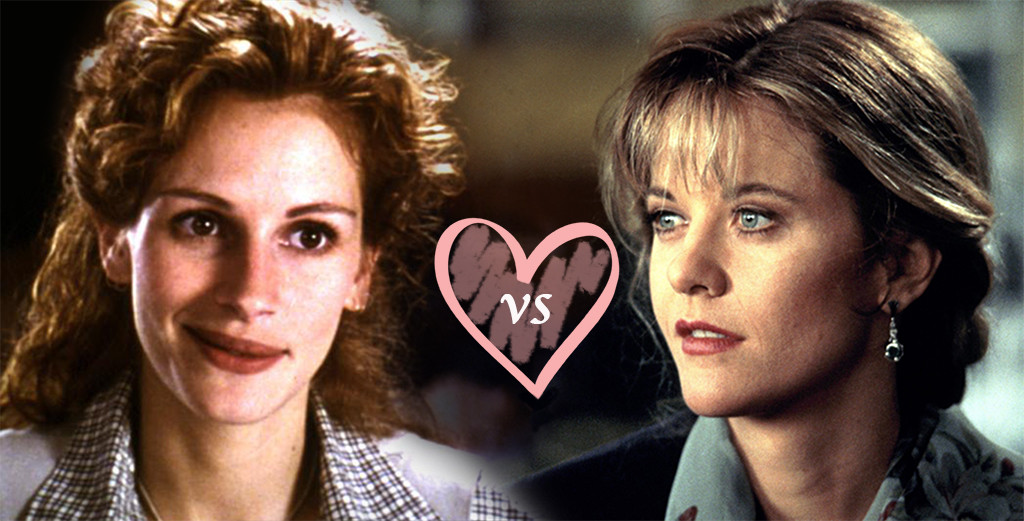 No movie genre has ever been more simultaneously revered and ridiculed as the romantic comedy. They're feel-good, but they're saccharine. They make audiences cry, but they also make them cringe. And they're so incredibly predictable that most viewers could probably recite the typical plot at a moment's notice.

But that description applies to rom-coms today. Back in the 90s, they were beacons of cultural quality. It was the heyday of the romantic comedy, an era when these flicks received the best writing, starred the best actors and actually had plot points more complex than hard-edged-career-woman-is-softened-by-love.

And no one served as a better example of the highest bastion of romantic comedy than Meg Ryan. Well, except for Julia Roberts. These actresses straight-up owned the genre during the Greatest Decade (trademark pending). Many a Thanksgiving dinner conversation has been spent arguing over who was the better example of the 90s rom-com, and now E! News is here to end this argument once and for all. 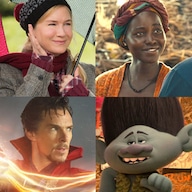 2016 Fall Movie Preview: More Than 30 Films You Gotta Know About

Meg Ryan: The '90s were pretty much Ryan's heyday—she was in 14 different films. From romantic comedies were her bread and butter (and conversely, she is the bread and butter of romantic comedies). The most notable standouts from the decade start with Sleepless In Seattle, the bastion of sap. If you didn't cry listen to widowed Sam telling radio host Marcia Fieldstone "I'm gonna get out of bed every morning, breathe in and out all day long, and then, after a while, I won't have to remind myself to get out of bed in the morning and breathe in and out...and then, after a while, I won't have to think about how I had it great and perfect for a while," then YOU ARE A MONSTER. In fact, if you didn't cry just from reading that quote, then you should definitely have your pulse checked.

Credit should also be given to When a Man Loves a Woman, that slightly depressing yet hilariously quirky story about an alcoholic and her enabling husband; French Kiss, which featured the most charming French crook of all time, and of course You've Got Mail.

Julia Roberts: We'll start with a little film called Pretty Woman—it was basically the movie of the 90s, regardless of genre. It's probably still Roberts' most talked-about role, or at least it is in the circles we run in. She also played a food critic attempting to steal the bride's fella in My Best Friend's Wedding and a Hollywood leading lady slumming it with a lowly London bookstore owner in Notting Hill.

Meg Ryan: It takes two to tango, or more importantly, it takes two to rom-com. No romantic movie heroine can fully do her job without at least a little bit of oomph from her onscreen counterpart. Meg Ryan got all that in spades. After all, one can't even begin to discuss her role in the historical fabric of rom-coms without first uttering the great name Tom Hanks. Tom Hanks and Meg Ryan are like peanut butter and jelly. They're Chipotle burritos and Sriracha. They're two romantic peas in two comedy pods. 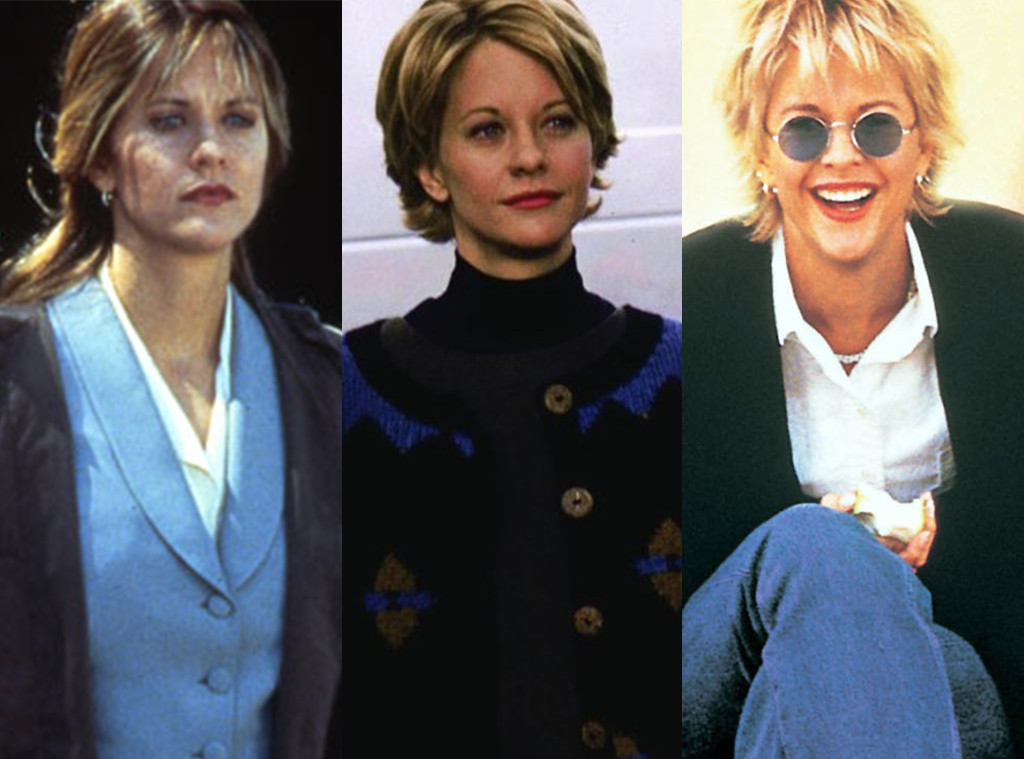 Julia Roberts: She may not have had a perennial '90s matchup like Meg, but J.Rob didn't do too shabby in the love interest category. In fact, she was paired with several of the decades heaviest hitters (and current or soon-to-be silver foxes). The '90s kicked off with the venerable and hunky Richard Gere—they get extra points for an eventual onscreen reunion, but deductions on a count of it not taking place in the era we're discussing today. She also teamed up with Hugh Grant, who is basically the male Julia Roberts when it comes to rom-coms. We could wax poetic for hours on his chippy dialogue delivery and the under-appreciated importance of Two Weeks Notice, but that's a debate for another time.

Props must also be given to her My Best Friends' Wedding costar Dermot Mulroney; he may not have a place in the upper echelons of the hall of fame alongside Grant and Gere, but man did he have adorable dimples in that movie.

The Winner: We have to give this round to Meg Ryan, on account of the double dose of Tom Hanks.

Meg Ryan: Okay, so we don't exactly want to recreate her character's '90s style. We loved everything about her outfits in When Harry Met Sally (those cable knit sweaters! That fedora-slash-top-hat situation!), but that came out in 1989 and doesn't count at all. In fact, we'd go so far as to say that her movie stylists had a real penchant for making her look a casual decade older. They constantly put her in pleated braids, pixie cuts and all the silk scarves. This was a 32-year-old woman! 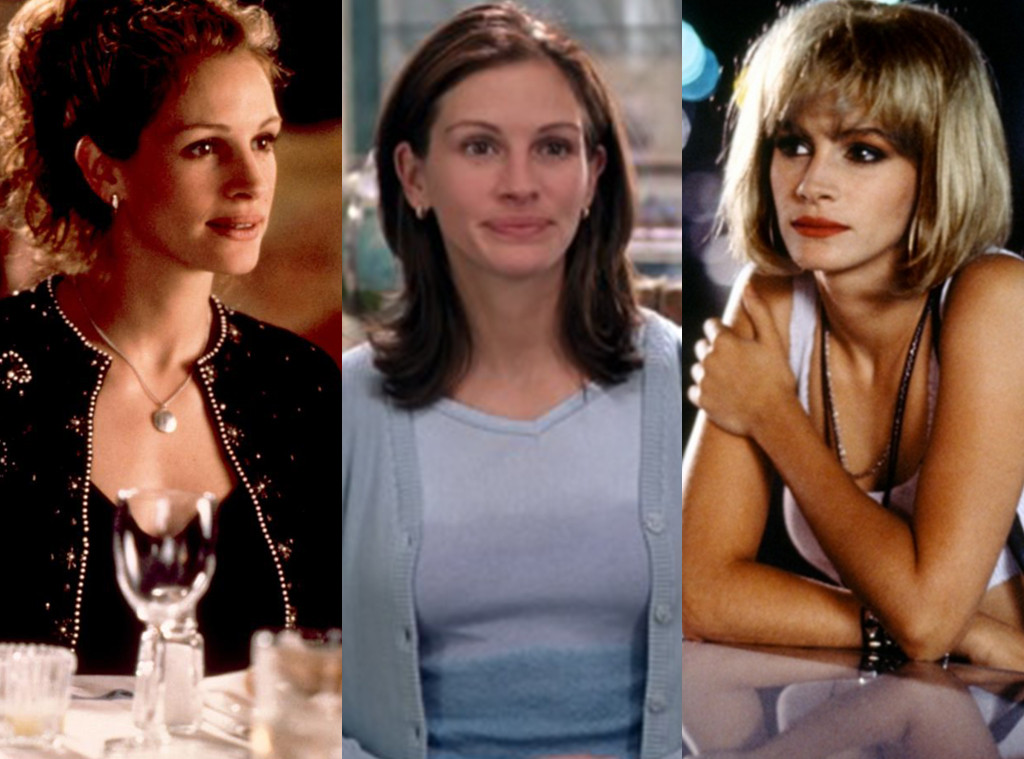 Julia Roberts: Her movie outfits basically were the '90s. During the early part of the decade she was all sky-high boots and crop tops and accessories that offer no practical use, like suspenders. Her big hair, while not necessarily super specific to the decade, came to be known as her trademark and her most recognizable and enviable feature. Then enter Notting Hill, in which she donned leather jackets, patterned blazers and comfy sweaters, was way too chic to be the '90s, which is probably the best compliment a woman can get.

Winner: A point to Julia, because no braid in the world could beat out those thigh-highs.

Meg Ryan: Pretty much the entire script of Sleepless In Seattle is worthy of the monologue hall of fame. You did read what Tom Hanks said to the radio host about losing his wife, right? Another perennial favorite is "This was mailed before I went to Seattle. Before the ho." And who could forget "If you get a new wife, I guess you'll get to have sex with her, huh?" We also have a soft spot for anything that Meg and Tom wrote to each other in You've Got Mail. "Don't you love New York in the fall? It makes me want to buy school supplies. I would send you a bouquet of newly sharpened pencils if I knew your name and address."

Julia Roberts: My Best Friend's Wedding will forever be known as the movie that gave us the saying "Crème brûlée can never be Jell-O." But really, when it comes to '90s-era rom-com quotes, one need look no further than "I'm just a girl, standing in front of a girl, asking him to love her." Mic drop.

Winner: Julia. You can't argue with the mic drop.

And that makes the great, the legendary, the laugh-tastic J.R. our final and ultimate winner of the '90s romantic comedy showdown. Although, truly, we all win for having walked down that beautiful memory lane.